Thanks for Visiting Mint
You seem to have an Ad Blocker on. Please turn it off in order to continue, or whitelist Mint
HOW TO TURN OFF AD BLOCKER
OR
REFRESH IF YOU ALREADY TURNED OFF THE AD BLOCKER
Home >Mint-lounge >Mint-on-sunday >GST bill passed, new Gujarat CM and Uber’s China retreat

The Rajya Sabha on Wednesday passed the constitutional amendment bill for the goods and services tax (GST) thus setting in motion the process for rolling out the single biggest tax reform in the country. Once in place, it will economically unify the country for the first time. It will also reset federal relations, something finance minister Arun Jaitley described as “pooled sovereignty". However, the passage of the bill is a necessary but not sufficient condition for the implementation of this indirect tax reform. The government is insisting that it will adhere to the roll-out deadline of 1 April 2017, but many economists and experts say that they expect a delay. It is estimated that the implementation of GST will add up to 2% to the country’s GDP. After the passage, everybody is waiting for the announcement on the GST rate. 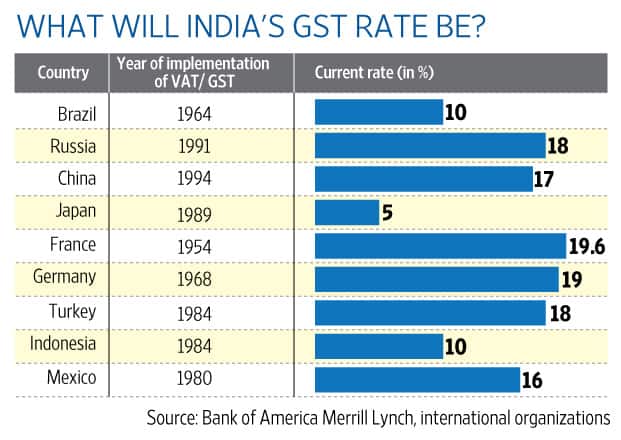 The Union cabinet on Wednesday approved the Motor Vehicle (Amendment) Bill, 2016, providing hefty penalties for violation of road safety rules. The fine for driving without a licence goes up 10 times to Rs5,000, while the penalty for drunken driving increases fivefold to Rs10,000. The cabinet also recommended that for persons without helmets, the proposed penalty would be Rs1,000 apart from the suspension of licence for three months. The current penalty is Rs100. For seat-belt violation, the proposed penalty is Rs1,000, up from Rs100. For offences by juveniles, the guardian/ owner shall be deemed to be guilty. They will have to pay a penalty of Rs25,000 apart from three-year imprisonment. 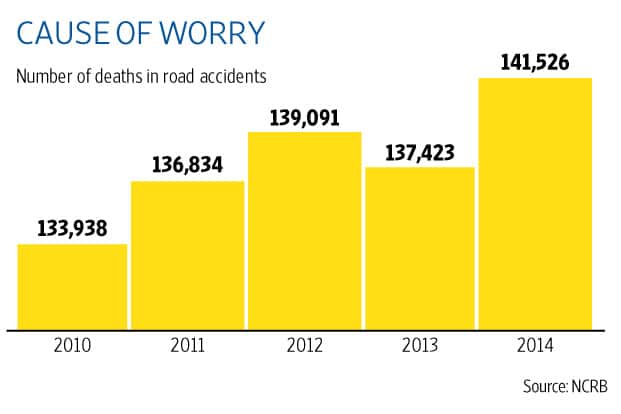 3. Probe on after children die in mica mines

Officials launched investigations on Wednesday into child deaths in India’s mica mines after the Thomson Reuters Foundation revealed children were being killed in illegal mines and their deaths covered up. A three-month investigation in the mica-producing states of Bihar, Jharkhand, Rajasthan and Andhra Pradesh found at least seven children have been killed since June, mining for mica, the valued mineral that puts a sparkle in make-up and car paint. These deaths have gone unreported as victims’ families and mine operators do not want to end the illegal mining that is the only source of income in some of India’s poorest regions. In Jharkhand, labour minister Raj Palwar said on Wednesday that he has launched an investigation. 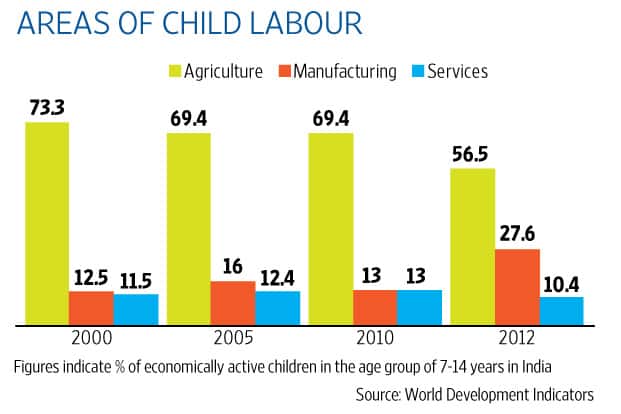 HCL Technologies Ltd, the country’s fourth largest IT firm, saw its June-quarter consolidated net profit rise by 14.8% to Rs2,047 crore on account of broad-based growth across service offerings, and it expects 12-14% revenue growth in the ongoing fiscal year. The Noida-based firm, which posted a net profit of Rs1,783 crore in the year-ago quarter, had resumed its practice of presenting a revenue outlook for the new fiscal after 12 years. For the reported quarter, HCL Tech’s revenues grew 15.9% to Rs11,336 crore from Rs9,777 crore in the year-ago period, as per US GAAP accounting norms. For fiscal 2017, it expects its top line to grow 12-14% without fluctuation in currencies, higher than industry body Nasscom’s outlook of a 10-12% rise in the IT industry’s export revenues for the fiscal. 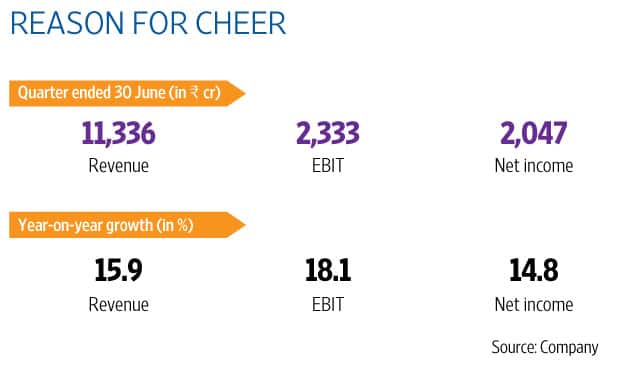 While a good monsoon after two back-to-back drought years has brought relief to most people, parts of the country are suffering heavily due to floods. Bihar and Assam seem to be the worst hit states, with close to 100 people losing their lives and hundreds of thousands left homeless. In Bihar, 13 districts have been affected by the floods, while in Assam, 23 out of the state’s 25 districts are underwater. Apart from their human and material costs, floods in Assam also pose a threat to biodiversity, with reports of one-horned rhinos drowning in Kaziranga National Park. A CNN report has put the number of animal casualties in the forest reserve at more than 300, which includes 10 rhino calves. In a separate incident in the state of Maharashtra, more than 20 people are feared dead after a their bus was washed away along with a bridge in a flooded river. 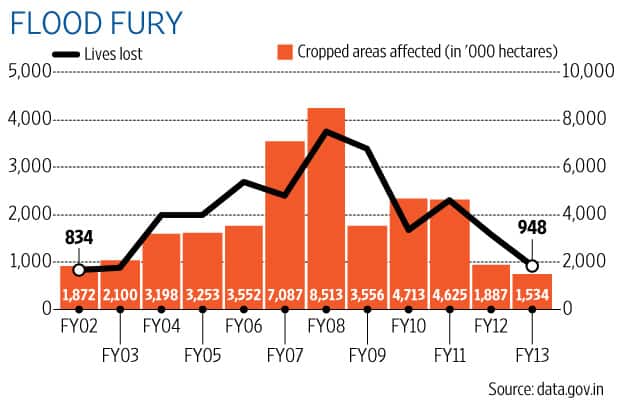 The BJP named Vijay Rupani as the new Gujarat chief minister on Friday. Rupani replaces Anandiben Patel, who announced her resignation through a Facebook post last week. While the BJP has been maintaining that Patel’s resignation is in keeping with the party’s policy of leaders retiring after the age of 75, political observers have attributed the developments to two agitations rocking Gujarat. Patel, who was nominated by Narendra Modi as his successor after the 2014 general election, has been facing a difficult time in controlling political unrest. The agitation by Patels demanding job quotas and protests by Dalits against cow vigilantes have dented the BJP’s popularity in a state which is scheduled to face assembly polls next year. 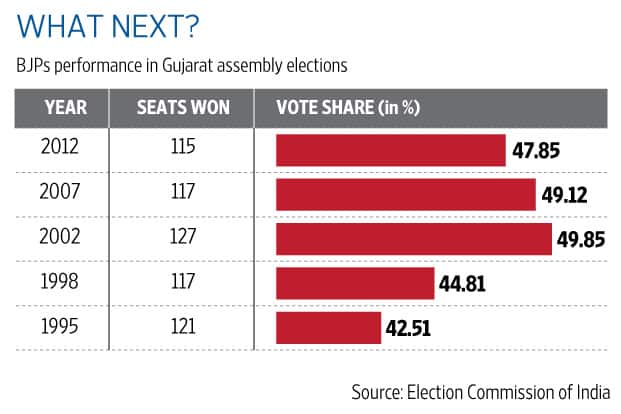 While the overall foodgrain production could not be impacted by the drought over the past year, it has led to the lowest production of pulses in six years, showed the fourth advance estimates released by the agriculture ministry on Tuesday. According to the ministry, foodgrain production rose marginally from 252.02 million tonnes (mt) in 2014-15 to 252.22 mt in 2015-16, despite 11 states declaring a drought last year. These estimates imply that any change to the growth rate of the agriculture sector in the gross domestic product (GDP) data is unlikely. In 2015-16, the sector was estimated to have grown at 1.2% against a 0.2% contraction in the year before. The fourth advance estimates for 2015-16 are also in line with the third advance estimates released in May, which put the production numbers at 252.23 mt. 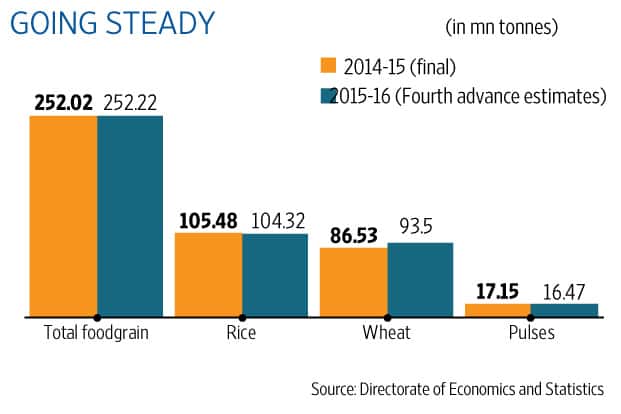 Uber Technologies Inc. sold its China operations to rival Didi Chuxing, ending an expensive price war and freeing itself up to focus on other markets. This brings to an end a battle between the two companies for leadership in China’s fast-growing ride-hailing market. Uber has said that it is profitable in the US and Canada, but losses in developing markets have undercut that hard-fought progress. With China settled, Uber can turn its focus to rivals in other countries where it is fighting for market share, such as Grab in South-east Asia, Ola in India and Lyft Inc. in the US. Uber’s investors had been clamouring for the company to sell off its China assets and focus on more promising opportunities. 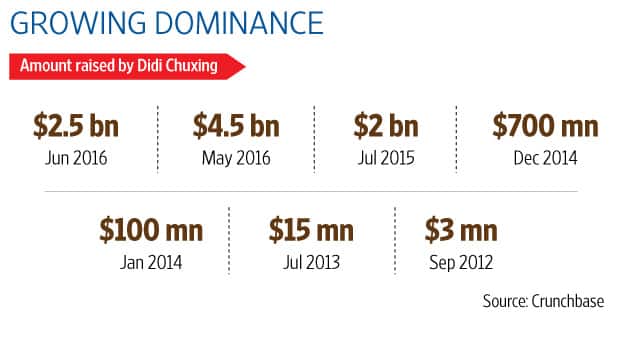 Indian factory activity grew at its fastest pace in four months in July as export orders jumped, but prices remained muted, giving room to the central bank to ease policy further if needed, a private survey showed on Monday. The Nikkei/Markit Manufacturing Purchasing Managers’ Index (PMI) rose to 51.8 in July from June’s 51.7, marking its seventh month above the 50 level that separates growth from contraction. The output and new orders sub-indexes both rose to their highest since March. For China, the Caixin China General Manufacturing PMI rose to 50.6 in July from 48.6 in June, the first expansion in 17 months. The UK PMI, meanwhile, was at 48.2 in July, down from 52.4 in June, the lowest level since February 2013, while the factory PMI for the euro zone fell to 52 in July from 52.8. 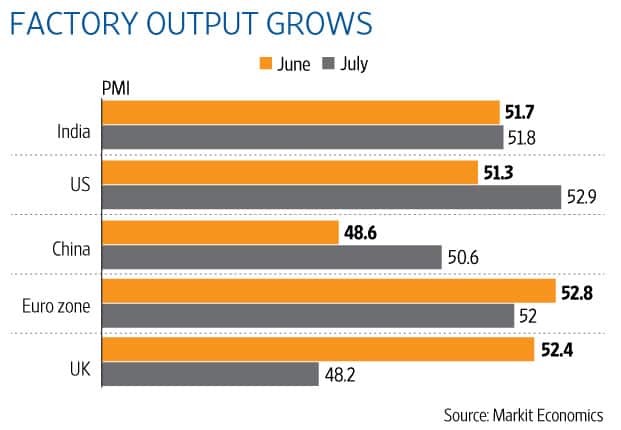