The long shadow of Reliance Jio continued to linger on the Indian telecom sector. On Thursday, Bharti Airtel, India’s biggest telecom service provider, reported a decline in revenues and net profit for the sixth straight quarter. On a year-on-year basis, its revenues declined 12.9% and net profit 39%. The dip is mainly due to the continuing effect of Reliance Jio’s tariff wars initiated over a year ago and the impact of the telecom regulator more than halving the interconnection fees. 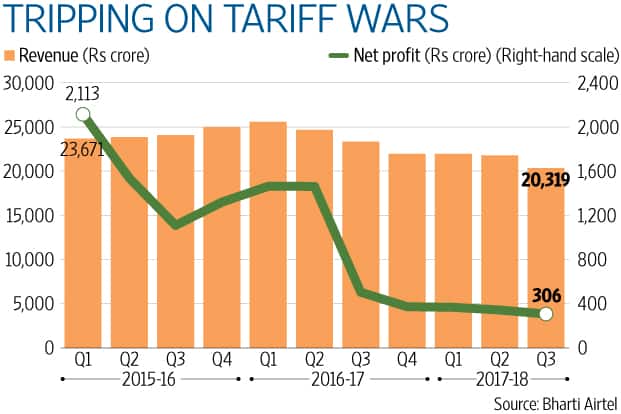 They are expected to go to school, and learn well there. But they are not: as many as 25% of rural Indian youth in the 14-18 years age group were unable to read basic text fluently in their own language. This is among the many findings of the Annual Status of Education (ASER) Report 2017, which focused on 14-18 year olds, and collected information in four domains: activity, ability, awareness and aspirations. Part of the problem is they also have to work: as many as two in five youth enrolled in school or college also worked 15 days a month. And three out of five who were not enrolled were working. 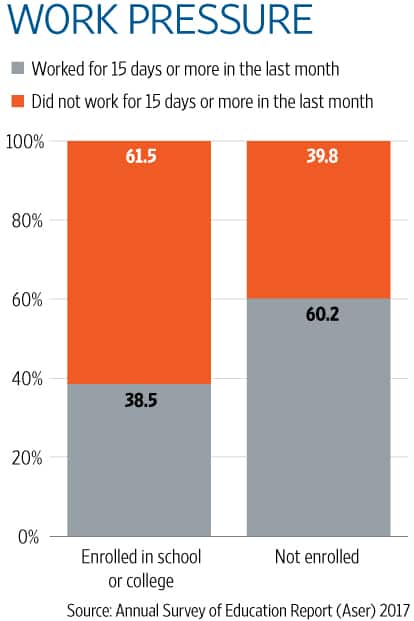 Prices of Brent crude oil topped $70 to a barrel, a three-year high. And, in India, the price of diesel followed suit, rising to Rs62.25 per litre in Delhi—its highest ever. In the last six months, the increase in the price of diesel has been 13%, a quantum that will have a trickle-down effect as the transportation sector is hugely reliant on this fuel. Diesel was once a controlled fuel, and governments, citing public interest, would subsidise it heavily. 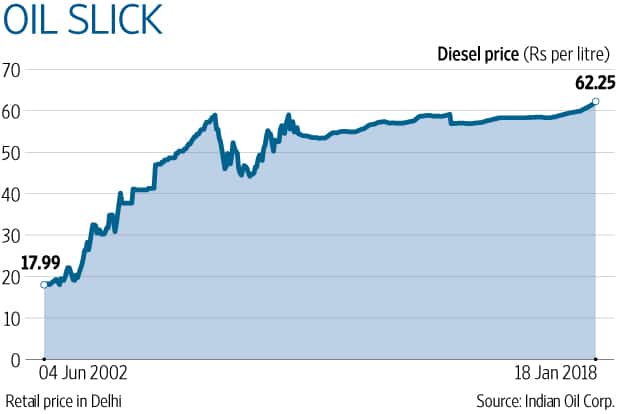 London-based miner Gem Diamonds said it had found a diamond weighing 910 carats in Lesotho in Southern Africa, which would make it the world’s fifth-largest diamond. It is said to be the size of about two golf balls, and could be worth about $40 million. Shares of Gem Diamonds climbed as much as 12% after the announcement. They cooled off, but were still up 5.3% for the week on Thursday. The largest diamond, Cullinan, weighs 3.4 times that of Gem’s latest discovery, and was found near Pretoria in South Africa in 1905. 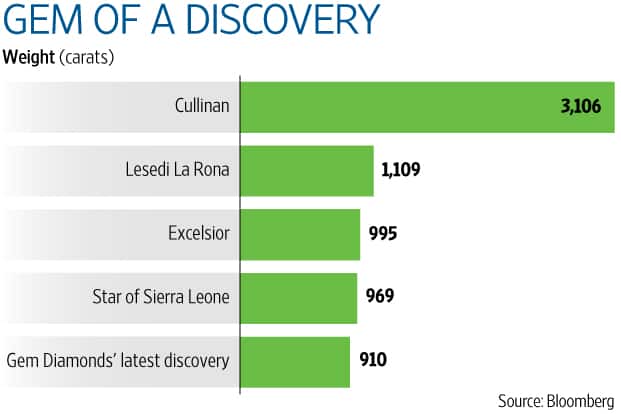 Three months after an aborted attempt to acquire financial services companies of the Shriram Group, IDFC Bank announced it was merging with Capital First, a non-banking finance company (NBFC) in an all-stock deal. Shareholders of Capital First will receive 139 shares of IDFC Bank for every 10 shares held by them. IDFC Bank is paying top money to buy growth and scale, especially on the retail side: a day before the deal was announced, the market capitalization of Capital First stood at Rs8,266 crore and that of IDFC Bank at Rs23,019 crore. Post the deal, stocks of both companies have lost ground. 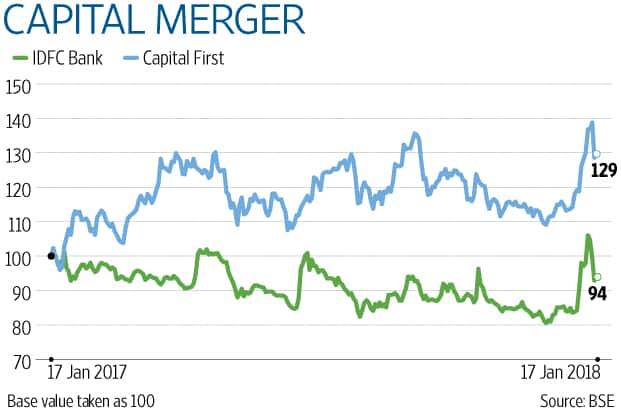 6. India’s away quest off to bad start with South Africa loss

India’s quest to cement its status as the number one test side by winning challenging away series is off to a bad start. In the ongoing series in South Africa, the hosts beat India in the second test to clinch the series. In the process, they extended their unbeaten series record against India in South Africa to 26 years and seven test series. Since 2010, while India has registered series wins in West Indies, Sri Lanka and Bangladesh, it hasn’t won a series against the four tough sides (Australia, England, New Zealand and South Africa), all of which it plays in the next 12 months. 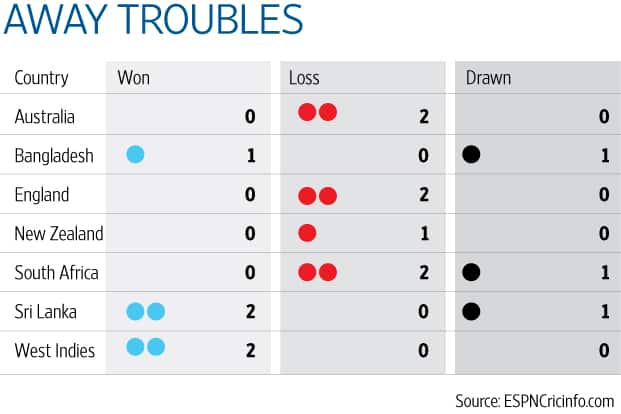 European club football is in better shape than ever, according to UEFA’s Club Licensing Benchmarking Report for financial year 2016 that aggregates data for 681 top-division clubs across 50 leagues. This set reported aggregate operating profits of €832 million in 2016, an increase of 15% over 2015 and the highest since UEFA began this exercise in 2008. Europe’s clubs have now generated about €2.7 billion in operating profits in the last four years, against a combined operating loss of €830 million between 2010 and 2012. Aggregate net loss—after player transfers, and non-operating, financing, tax and divestment activities—shrunk to €269 million in 2016. 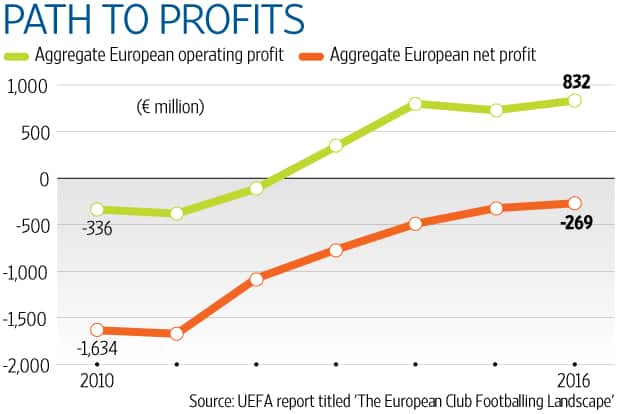 FMCG major Hindustan Unilever posted a net profit of Rs1,326 crore in the quarter to December 2017, a year-on-year increase of 28%. Volumes grew 11% on a year-on-year basis. Although this increase requires tempering as the December quarter of 2016 bore the brunt of demonetisation, experts said it augurs well for consumer demand. In the December quarter, HUL registered higher revenues in all its four main segments, namely personal care, home care, refreshments and foods. 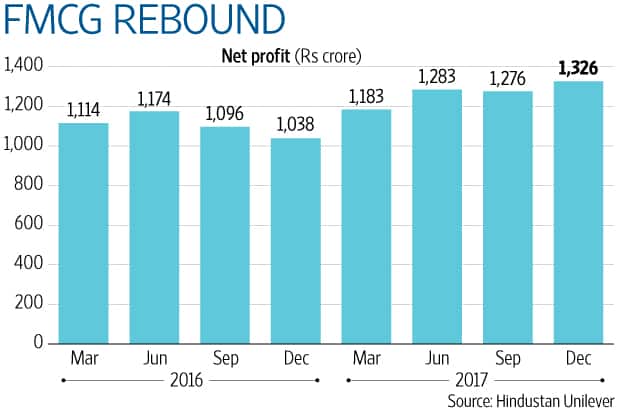 In 2012, a Supreme Court order asked the government to phase out in 10 years the so-called subsidy for Haj pilgrims. Six years on, the government has done so. The Haj subsidy was being given to Muslim pilgrims going on Haj—an annual Islamic pilgrimage to Mecca, in Saudi Arabia—and took the form of discounted airfares on state-run airline Air India. This subsidy, given to Air India for operations of Haj charters, has been on a downward trend since 2012-13. 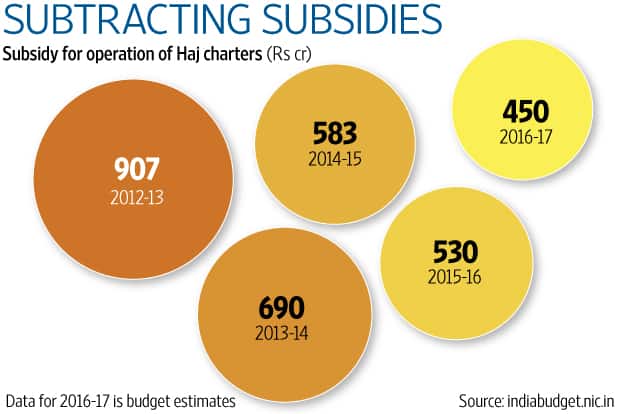 India’s retail inflation, as measured by the Consumer Price Index (CPI), increased to 5.2% in December, from 4.9% in November. Its December reading, a 17-month high, was also above the central bank’s medium-term inflation target of 4% for the second consecutive month. The increase was mainly due to a rise in the prices of food, fuel and housing. Meanwhile, wholesale prices, as measured by the Wholesale Price Index (WPI), eased to 3.6% in December, against 3.9% in November, as food prices grew at a slower rate. Economists say this could trickle down to the retail level, and pull down the CPI. 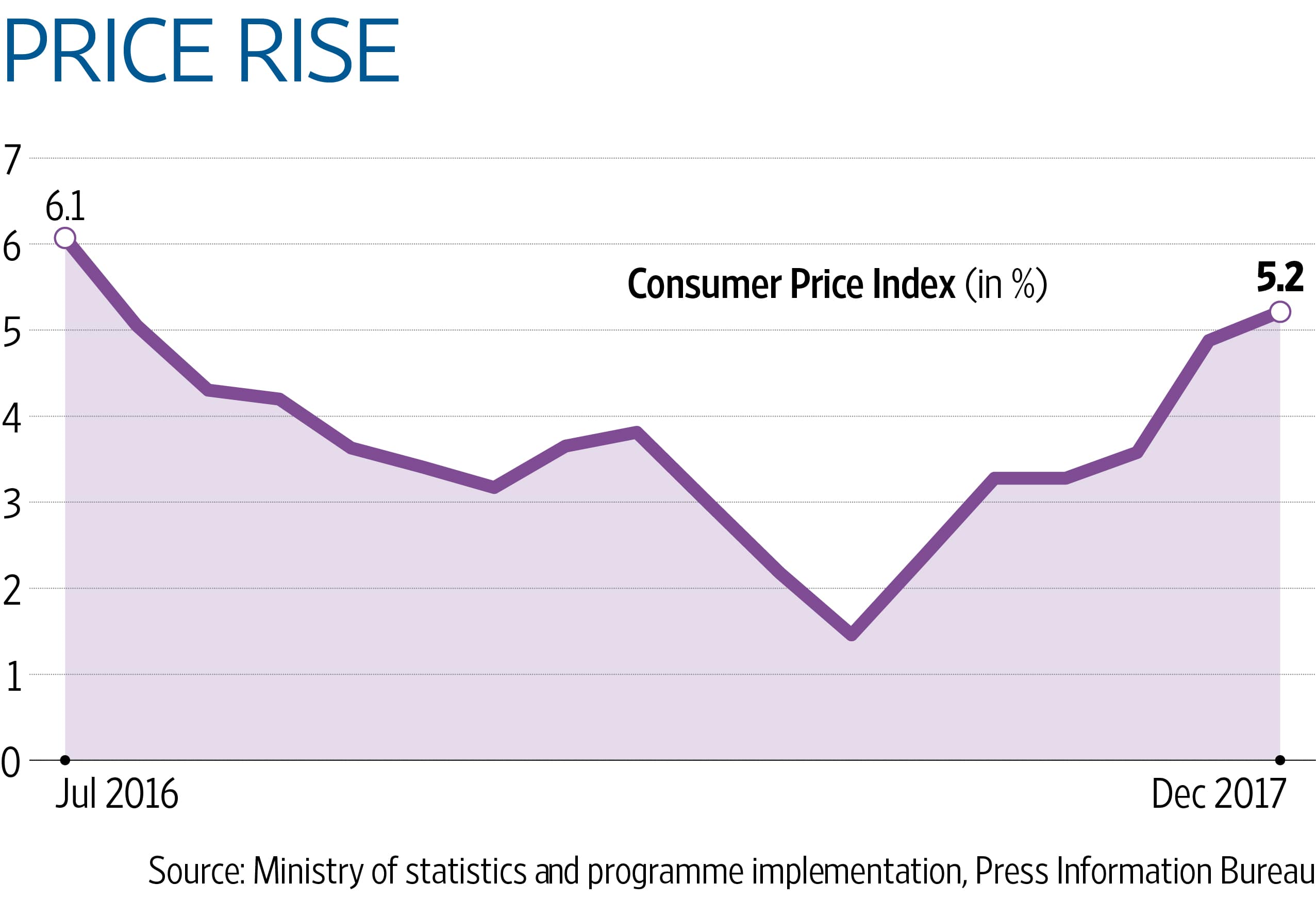