San Diego and Mumbai: A tale of two zoos

It’s blazing an uncharacteristic 32 degrees Celsius in San Diego, thanks to a Californian heat wave. At the San Diego Zoo—widely regarded as one of the best in the world—a few days before it celebrated its centenary in October, we are sweating on our run back to the Panda Trek.

We used the zoo app’s live camera to see that mama panda bear Bai Yun has ventured out of her air-conditioned bedroom, in the mood to play, and offer a great sighting.

She is rolling around in the mud, her face seeking the mist fans every once in a while. She stands on her hind legs, reaching for a set of colourful balls on a tree; these are dusted with cinnamon, a scent she loves, the keeper tells us on the loudspeaker.

Using the custom itinerary we have built ourselves on the zoo app, we have visited the Panda Trek, Lost Forest, Treetops Way, Hippo Trail and various other zones. It’s a lot to do in one day—most people return for the other half—and my fitness tracker shows 27,000 steps at the end. A day at the San Diego Zoo is a lively experience that is sensory, truly educational and awe-inspiring. A month later, at Mumbai’s Veermata Jijabai Udyan, or the Byculla zoo, I’m not expecting an experience that parallels the massive San Diego Zoo, of course, but I’m lost even before I have entered. It is 31 degrees in the city, which has yearly average temperatures similar to San Diego’s. Here, Dory the penguin died two weeks ago, allegedly due to negligence.

The main entrance has moved, and there is no sign to indicate the makeshift gate, buried deep into a bylane, about a 15-minute walk from the usual point of entry. The ticket is a bare stub and accompanied with no map, information or introduction to what animals live here.

Left or right? The only clue is a series of arrows to the adjoining Dr Bhau Daji Lad Museum pointing right. I go left.

While the Nilgai or blue bull and the Asian elephant enclosures feature detailed descriptions in English and Hindi about the animal’s habitat and characteristics, others have just the species names painted on a board. Curiously, the crocodile enclosure had no mention of the c-word; instead, a large blue sign at one side of the moat declares “Gunpowder Road No. 2, Pin – 400010".

An inexpensive way to engage visitors, taking cues from the San Diego Zoo, is to have customized signs for each of the big-draw animals, with their names and habits for instant relatability. It interests us to know, then, that while Montana, the grizzly bear, likes to spend his time lounging in the pool, his brother, Scout, is more athletic, always eager to play outdoors.

“We have been pushing for better signage at the Mumbai zoo for years," says Sunish Subramaniam Kunju, secretary, Plants and Animal Welfare Society (PAWS) ,Mumbai. “Visitors need to learn about the animals, their habitat and characteristics to fulfil the purpose of a zoo. A set of better signs is the first step. The next is having trained caretakers around the enclosures." 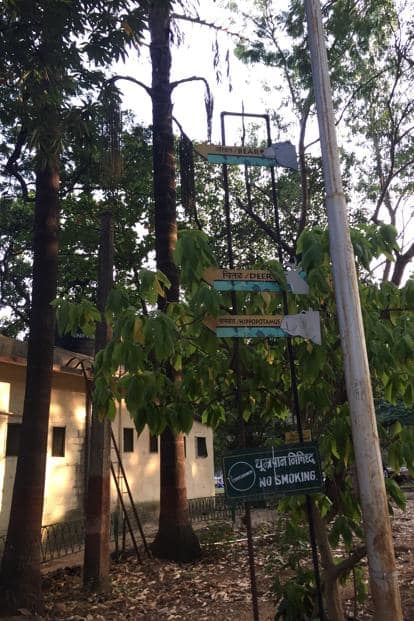 Kunju and his team submitted a Citizen Inspection Report of the zoo conditions to the government in 2014, and he says not much has changed. A two-member team surveyed the zoo as a result, but took little action.

Stray cats enter the enclosures, rats are found in some, and they are unclean, especially those with water bodies. With no caretaker or authority minding the campus, people carry plastic bags in and were found throwing stones at a sleeping bear.

In San Diego, the keeper or caretaker is not only monitoring activities around the animal’s enclosure, but often furnishing the visitor with nuggets of information about the species as well as the individual animal. The enclosures go beyond the minimum—the leopards, for instance, have transparent overhead passageways that connect their living areas.

“The overhead passageways are one of the exciting features of this exhibit," writes Todd Speis, senior keeper, San Diego Zoo, in a blog about the habitat. “They allow the cats to get up high, which is a unique way for the visitor to observe it, and it’s also a place a cat naturally wants to be—it wants to be where it can see its whole territory."

Many of the species have mixed enclosures to encourage them to co-exist as in the wild—it’s great fun to see red-tailed monkeys and spotted-neck otters roll around chasing pumpkins together; delightful to watch an elegant, steely cheetah hang out with her best friend, a playful golden Labrador.

When a cheetah cub or wolf pup is brought into the zoo, it is paired with a domestic dog puppy into The Buddy System—through playtime and snuggling, the two animals develop a bond that impacts each other’s temperament; if the dog is relaxed, for instance, so is the cheetah or wolf.

“When people ask me how animals are treated at the Mumbai zoo, I tell them to have a look at the emu cage," says environmentalist Anand Siva. “You will see the birds pecking at the rust of the cage, which is a dark, blank enclosure that gets easily flooded. A few years ago, a boa (snake) went mysteriously missing from the zoo. No one knows where it has ended up, how much danger it could cause."

“Why put the animals through this under the guise of education? Take the elephant enclosure for instance. The beasts are chained to their stable, about 100ft away from the visitor railing. How can you see them, and what do you learn?" asks Siva.

The death of Dory the penguin has spun the spotlight onto various questions—what standard should zoos have to meet to be able to bring in endangered species? Are zoos an inherently cruel place and practice?

“The penguins should never have been brought to Mumbai without making sure the facilities were in place," says environmentalist Stalin Dayanand, project director of NGO Vanashakti. “Unless an enclosure is deemed to be near-natural, it should not be allowed."

The birds he refers to are the now infamous eight Humboldt penguins brought to Mumbai in July, procured from Coex Aquarium in Seoul, South Korea. The flightless species is native to Peru and Chile, and is fit to survive in warmer climes. Only about 12,000 Humboldt penguins remain in the world.

A landmark project for the Mumbai zoo, it has cost the Brihanmumbai Municipal Corporation Rs2.5 crore to buy the birds; this figure is expected to run into Rs45 crore for their upkeep over five years. The penguins are currently in isolation as they get accustomed to Mumbai. Later this month, they are likely to be displayed at the public exhibition space—a 1,500 sq. ft area.

The authorities have courted controversy from activists and citizens on two counts—for using up public funds that could have been deployed on other necessities and bringing an endangered species into a zoo with an otherwise poor track record. The activists’ worst fears were realized when 18-month-old Dory died in October.

The penguin display is part of the zoo’s ambitious Rs150-crore revamp project. Next on the cards is a giraffe exhibit, says zoo director Sanjay Tripathi, which will be followed by other exotic species.

According to Kunju, zoos should be rated as per international standards to decide whether they are eligible to adopt a certain species.

“The Humboldt penguin is a sturdy species that requires an optimum temperature of 16 to 20 degrees," says Tripathi. “What happened with Dory was an unfortunate incident, but it has little to do with the external environment. Humboldt penguins are being exhibited in 120 countries, including our neighbours Sri Lanka, Thailand and Malaysia, with climate similar to ours."

The other seven penguins, the zoo director adds, are being looked after in adherence to international guidelines.

The purpose of a zoo is to conserve and educate, and according to Tripathi, especially relevant now. “So many species are endangered or becoming extinct. Certain research is possible only in captivity. It is important to note that any animal being brought to a zoo does not come from the wild—it is brought via exchange programmes from other research centres or zoos," he says.

San Diego Zoo’s mission is to save species, says Christina Simmons, a PR professional at the zoo. “We work to do this in a variety of ways, building both sustainable populations at our sanctuaries and working to learn about and recover species in their native habitats (working to recover and protect these habitats as well). Our work includes not just animal species but also plants. We have hundreds of conservation projects that battle extinction, involving the giant panda, koala, giraffe and many others." 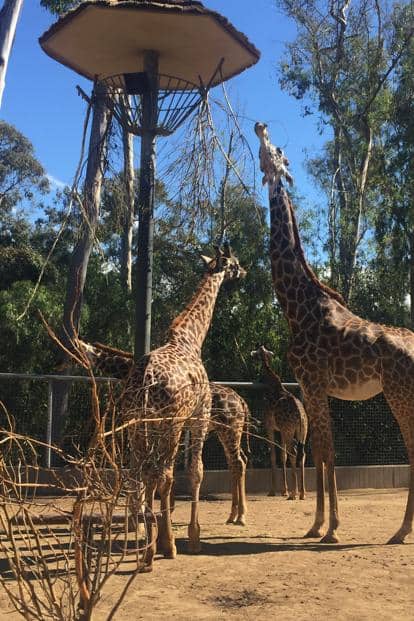 Tripathi admits that Indian zoos have a long way to go in terms of conservation as well as education, via an interactive visitor experience. “Most Indian zoos lag behind in terms of interactivity, but the positive aspect is that they are not recreation centres for humans. Animals are not made to perform, no one can touch them," he says. “But we need to chalk out a master plan that involves interactive exhibits and educational workshops."

This involves meticulous planning, approvals and funding, of course. While the Mumbai zoo runs on funds from the local civic body, the San Diego Zoo operates via generous grants from individuals and organizations, membership revenue and from the sales of tickets, merchandise and food on campus. A portion of the local property tax goes to the zoo as well, which runs into millions of dollars each year.

Siva has an alternate view on the idea of zoo. “Zoos are not meant to offer good experiences to humans, but to focus on animals. In an age where we are moving away from physical meetings to video conferencing and WhatsApp, shouldn’t we shift from the primitive concept of caging animals in a zoo to education via YouTube or TV?"

Controlling the extinction of a species is not for us to decide, and not at the cost of hurting the animal, he adds. “Think about it. Certain human races are nearing extinction. Is it fair to lock up a man and woman in a confined room against their will, and expect them to help the race continue?"

Pankti Mehta Kadakia is a Mumbai-based journalist focused on culture, education and social development. She collects stories and passport stamps.

All photographs are by Pankti Mehta Kadakia.