1. A year on, digital transactions are the new normal

8 November marked a year since the government—overnight—discontinued the old series of Rs500 and Rs1,000 notes, which amounted to 86% of cash in circulation then and which required several months to replace. During this period, economic growth fell, normal life was disrupted and job creation hit the brakes. One metric that showed an increase was digital transactions, which was already on the rise but has entered a higher trajectory following demonetisation—that too more in volume terms that in value terms. Himachal Pradesh registered a voter turnout of 74% in its assembly elections, held on 9 November, according to the Election Commission. This could increase as these were numbers released by the Election Commission at 5pm on voting day, while polling was still on in about 500 booths. In nine assembly elections held since 1982, Himachal Pradesh has registered a turnout of above 70% in eight of them, the exception being 1990. And the highest so far is 74.5% in 2003. Results will be declared on 18 December, along with those for the Gujarat assembly election. 3. Odd-even scheme to have its third run in Delhi

As air quality in the National Capital Region persisted in the hazardous category, the Delhi government on Thursday announced the reintroduction of the odd-even rationing scheme for private cars—where odd- and even-numbered vehicles ply on alternate days—for five days, beginning Monday. As of March 2016, there were three million private cars and jeeps registered in Delhi and 6.1 million two-wheelers (which are exempt from odd-even). Further, between 2008-09 and 2015-16, the number of registered private two-wheelers and four-wheelers—which account for 94% of all vehicles in Delhi—increased by 60%. Mumbai became the first domestic side to play 500 matches in the Ranji Trophy. The most-storied team in Indian domestic cricket has won this premier competition 41 out of 83 times. The next best is Karnataka, with eight titles. Mumbai’s wins by decades include one when it won every year en route to carving a 15-year winning streak, from 1959 to 1973. On seven of those occasions, Rajasthan was the runner-up. Its dominance in the Ranji Trophy dipped in the 1980s, only to revive again the following decade. West Ham United sacked manager Slaven Bilic, becoming the fourth club in the 20-team English Premier League to change managers during the 2017-18 season. Bilic’s firing came at a time when the season was 88 days old and not even one-third of the way through in terms of matches played, with the club wobbling in the relegation zone. In his place, West Ham brought in David Moyes, whose last three job entries read: sacked by Manchester United in 2014, sacked by Real Sociedad in 2015 and sacked by Sunderland in 2017. In another consolidated move in the semiconductor industry, Broadcom made an audacious $105 billion bid to acquire Qualcomm. If it comes through, it would be the largest takeover in the technology space and would make Broadcom the third-largest chipmaker, after Intel and Samsung. Qualcomm was reportedly planning to reject the offer, even as Broadcom CEO Hock Tan did not rule out more aggressive options. In the past year, the share price of Broadcom has risen 52%, while that of Qualcomm—which is in the midst of a $38.5 billion takeover of NXP Semiconductor and is battling a patent dispute with Apple—has dropped 5%. 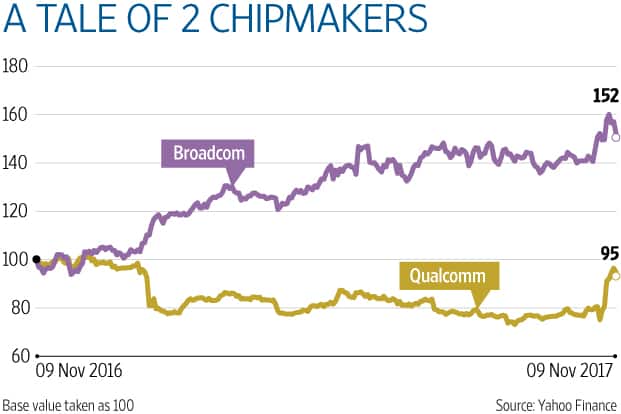 In the backdrop of political machinations in Saudi Arabia, the world’s second-largest oil producer in 2016, crude oil prices continued to increase. Brent Crude Futures for January 2018 touched a closing high of $64.27 per barrel on 6 November, a level it last touched on 23 June 2015. Over the past month, the increase in January futures now stands at 11%. Since July, prices have risen 40% as producer nations have slashed output. They will be meeting on 30 November to discuss production levels, and the market expectation is that they will continue to rein in output. 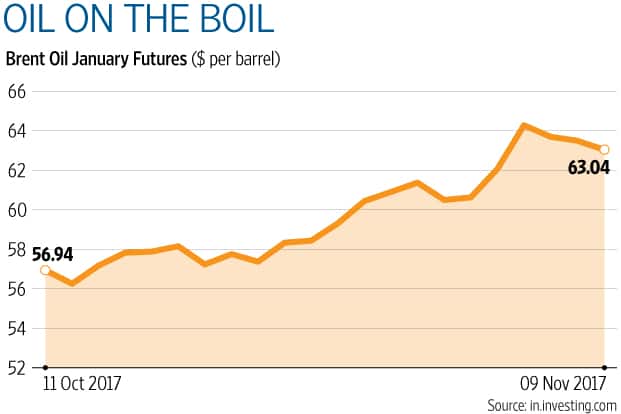 8. Year count of mass shooting incidents in US at 308 Gold consumption fell by 8.6% on a year-on-year basis in the July-September quarter to 915 tonnes, the lowest since the third quarter of 2009, the World Gold Council said on 8 November. It largely attributed this drop in global demand to India, and the disruption caused by a changing tax regime and tighter regulation around jewellery transactions. Growth in global holdings of gold-backed ETFs (exchange-traded funds) fell sharply, growing by 18.9 tonnes in the last quarter compared to 144.3 tonnes in the same period a year ago. The share price of Lupin tumbled 20% in four days after the pharma company said it had received a warning letter from the US drug regulator for violations at its Goa and Indore plants. Its closing share price is the lowest in four years. Lupin said it did not expect a disruption of existing product supplies, but said there may be a delay in product approvals from these two facilities.