Home / Mint-lounge / Mint-on-sunday /  Words by children, for children
Back
Share Via

Words by children, for children

Oh Em Gee! is the latest book from Timbuktoo Publishing, a first-of-its-kind venture in India, which nurtures the talent of child writers and publishes their work

It is just before noon on a rainy Sunday in Bengaluru. A few dozen children are sitting in rapt silence inside the Atta Galatta bookshop, tucked away deep in the leafy neighbourhood of Koramangala. The hush is broken every now and then by the occasional clear and confident or soft and hesitant voices of the children in the audience talking about their published works.

The stories and poems in the book Oh Em Gee!, adorned with a cheery yellow cover, span a wide range of themes—from the revenge of a dead clown to the mystery on Belltinkle Street. These have all been written by child writers between the ages of five and 15. This is the book launch.

At the event, Nandita Bose, a writer and one of the guest speakers, tells the children about how in history the first thing invading armies did was to find the places where books are stored and burn them, since they were the most dangerous. “Books have the power to influence thought and action, and now you are all powerful because you are all writers," she said. The children nod in a somewhat bemused understanding of this concept.

Oh Em Gee! is the latest book from Bengaluru-based Timbuktoo Publishing, which is the first of its kind in India, nurturing the talent of child writers and publishing their work in the form of delightful, glossy books.

Set up in its initial form as a workshop for children with an interest in writing (actively encouraged by their parents) in March 2013, Timbuktoo eventually took shape as a publishing house. So far, over 150 child writers have been launched across India, Hawaii, Colombo and Singapore. 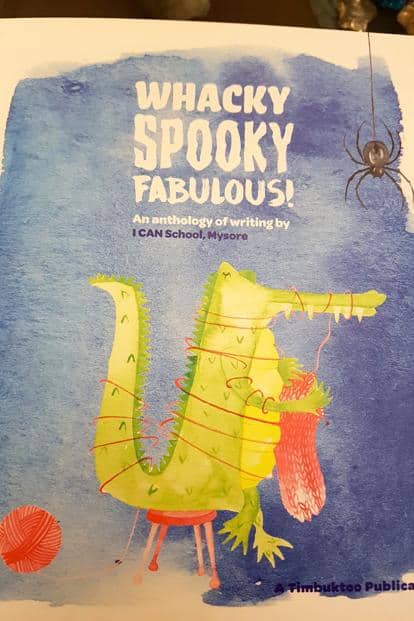 It’s the brainchild of Aparna Raman, a former advertising professional, who is currently part of the teaching faculty at the Srishti Institute of Art, Design and Technology in Bengaluru. Her interest in fostering the free spirit of children all over the world came from her personal joy in seeing the creative expressions of her son Rohan, then seven.

“All children are so creative, but they also need space to let their imagination soar. They need that encouragement to stay creative even when they become adults," she says. Her idea behind the publishing house was to allow the fresh voices of children to formally reach a larger audience.

The name of the company itself references the exotic, mysterious and faraway land of Timbuktu—the perfect place to spark the ingenuity of young minds. Judging by the range of ideas that propel the content of the published books, it seems true that children need only the mildest nudge to give free rein to their inner creators.

Apart from summer writing workshops, the output of which is eventually brought together in the form of a book, Raman also conducts weekend writing classes for children aged six to 16 (divided into two age groups). During each of these two-hour sessions, the children are given a topic to think about and write on.

While these serve primarily as writing prompts, Raman says that her aim is also to encourage children to think about the larger world they are part of: think slice-of-life descriptions of their residential neighbourhood, essays on what diversity and inclusiveness mean and archival of old family stories.

For many of these activities, Raman also encourages the children to go out and talk to people for ideas; for instance, a chat with the local newspaper boy, milkman or shop owner to see how their lives are changing along with changes in the neighbourhood.

At her house on a Saturday morning in one of central Bengaluru’s neighbourhoods, I watch a bunch of the younger children gathered around the dining table, intently chewing on their pencil stubs and looking out of the window at the dull sky. They have just been asked the intriguing question, “Where do aches go when they go?"

The theme for the morning’s writing exercise has them all puzzled and abuzz with questions, all of which Raman tackles patiently.

After 10 minutes of this, Raman finally puts an end to the questioning, and urges them to make up their own stories. She then talks about how children in her workshop tackle writer’s block—by staring out of the window till forced to work or till inspiration strikes. We are thinking, they say, and that is indisputable.

She encourages their progress with small pointers when someone is stuck: “Maybe you can start by explaining how you got the ache? Or you can create a character around that ache?"

For the next half-hour, I see the children interpret aches (and the larger concept of pain) in their own special ways, weaving narratives around aches that are here today, gone tomorrow.

At some point, Raman tells the ones who are still hesitating over their notebooks, “The important thing is to start, don’t overthink it, let go and see where your ideas take you."

Raman’s tips through the course of the session are not around what to write—leaving it entirely to the children—but how to write. Tiny spats erupt around the table continuously, from the querulous, “Why are you peeping into my book?" to the complaining “Look, he is sleeping."

But at the end of the 30 minutes, there is a story ready on every page. From a simple stomach ache from overeating “bad things" like pizza and burgers, to inventing a language to converse with a pet dog, the ideas have run riot. The children take turns to read out their work, which is then gently corrected and refined by Raman.

Vidya Deepak, the proud mother of one such participant, Khushi, talks about her daughter’s writing journey with Raman. “Khushi always had a flair for writing and creative thinking," she says, reminiscing about the time the child of five spun a story out of the blue, somewhat literally.

Looking at the clouds in the sky, Khushi had made up a tale of a poor boy longing for a Christmas tree, whose wish was fulfilled by the clouds. “I made her write it down, and she soon started writing more stories on her own," says Vidya, who found Raman’s workshops through social media.

Khushi has now been attending the weekly writing workshops for over three years, and, according to her mother, steadily improving her vocabulary, creativity and outlook along the way. “Her stories used to be initially restricted to princesses and pink, but now she thinks about so many things happening in the outside world," says Vidya.

The child herself claims that her favourite part about these writing classes are the kind of topics that “Aparna aunty" gives them, “especially the ones related to fantasy" (Khushi’s story in Oh Em Gee! involves a beautiful young girl called Azura and a wicked wizard).

Over the last three years, Khushi has written on—and wondered about—several things happening around her. One of this eight-year-old’s fondest exercises is a recent poem titled If the tree was your grandfather, would you still cut it down? that was part of an activism campaign created by Aparna Raman to save the 100-year-old trees in the old Bengaluru Veterinary Hospital complex.

If the tree was my grandparent,

I would never cut him down.

Because shine he must.

If he has no roots,

How will he give us fruits?

He will be history.

And why we cut him

Will remain a mystery.

From essays on buying things from the local grocer to help them face the assault from large supermarkets, to a short poem on the perils of using high beam lights in cars, to a story on a “Dizzy Earth" made to feel this way because of pollution and garbage (published a couple of years ago as part of another title, Make Believe), Khushi has now written on a variety of themes.

Aparna Raman also believes that the children benefit in various other ways, apart from just having their writing skills improved—most significantly, their increased confidence in expressing new ideas. Since these sessions are peppered with little life lessons, she (and the parents) see these as a supplement to the more formal learning at school. “Not being focused on a specific target like an exam helps them relax and think better," says Raman.

One of Timbuktoo’s most important projects has been with Sri Lankan children—both expats and locals living in the country ravaged by civil war and then the tsunami. For The Sri Lankan Chronicles, Raman mentored children from that country over Skype and phone calls for several months, before travelling there for the launch of the book that came together from these stories (in partnership with The Good Book Corner, which assists aspiring writers in various ways).

These stories show that the voices of children—and their optimism about the future—remain unflagging anywhere in the world, even in lands where many of them have had unhappy and perhaps even traumatic memories of natural and man-made calamities. The beauty of this tear-shaped isle comes alive through the eyes of the young writers there, who describe its ocean, forests, fields and homes with simple joy.

Raman admits that there was a lot of scepticism when she started off with the idea, especially about the viability of the business model. However, the market seems to be opening up, with increasing demand for stories written for children by children (a concept that did not exist earlier).

Her fee for the workshops is based on what is expected from them—only honing writing skills or taking it to final publication stage (some of the proceeds from their two latest books, including Oh Em Gee!, have gone to the Samvaad Institute of Speech and Hearing). The books are distributed mainly by an indie partner, and are also available online through channels like Amazon and Flipkart as well as bookstores in Bengaluru.

“I want to make sure that this makes a difference to both their words and world views," Raman says.