BJP's income was twice that of all other national parties combined, Delhi airport is the 16th busiest in the world, Volkswagen gets a new CEO and Axis Bank is also due for one 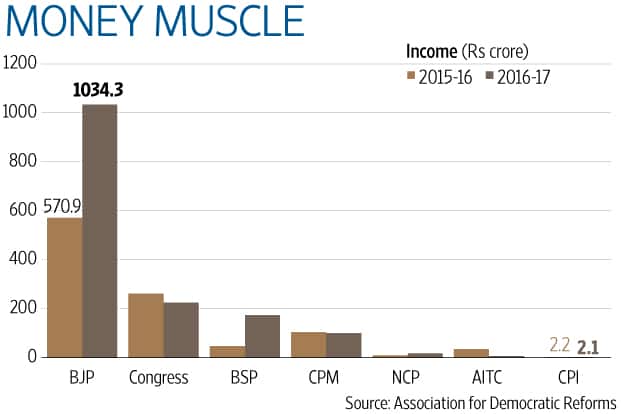 Passenger traffic at the world’s 20 busiest airports increased by 5.2% last year. With 1.5 billion passengers that enplaned and deplaned at these airports, they accounted for 17% of global passenger traffic. While Atlanta, Beijing and Dubai led the list, New Delhi’s Indira Gandhi International Airport appeared in this list for the first time. It handled 63.5 million passengers in 2017, a year-on-year growth of 14.1, which was the highest in this set; the next best was Guangzhou (10.3%). 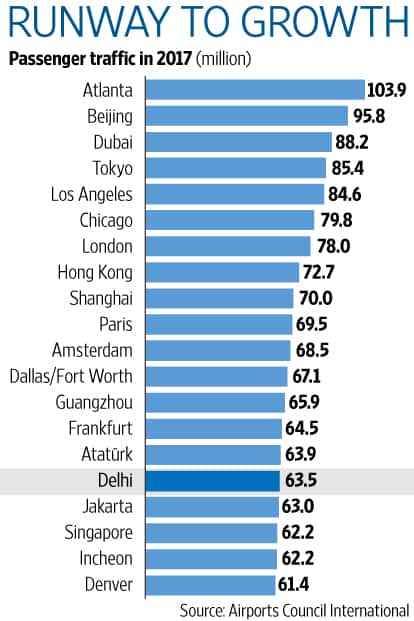 Axis Bank managing director (MD) and chief executive officer (CEO) Shikha Sharma has cut short her tenure and will leave the bank on 31 December. Her fourth term, granted for three years, was to begin in June 2018 and end in June 2021. Sharma joined Axis Bank as MD and CEO in June 2009. Her decision comes in the backdrop of an increase in Axis Bank’s bad loans since late-2015. Earlier this year, the board of Axis Bank had cleared a three-year term for Sharma, which the central bank reportedly asked it to reconsider. Under Sharma, the bank’s stock has delivered nearly five-fold returns in nine years. 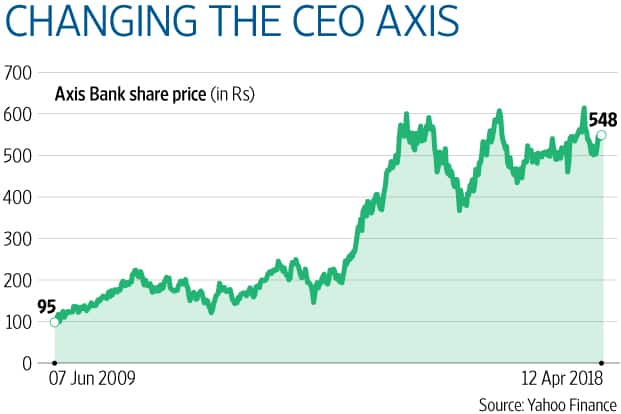 Volkswagen has replaced Matthias Mueller with brand chief Herbert Diess. Mueller was appointed chief executive in September 2015, after the company admitted to tampering with its engines for better emission readings. It resulted in the company paying $30 billion in fines and seeing its share price move in a band. The new appointment, in a sense, turns that page, and shifts the company’s focus from protecting reputation to reorganizing business. 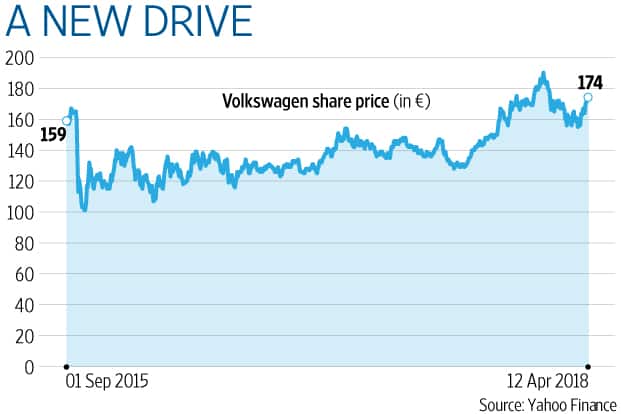 The semi-final lineup for the Champions League was decided last week via intriguing storylines In three of the four quarterfinal ties, teams had to overcome a large first-leg deficit to advance. One did (Roma over Barcelona), one almost did (Juventus over Real Madrid) and one promised to do so but imploded (Manchester City over Liverpool). This will be the 13th semi-final appearance for Real Madrid since 1993, when the tournament format changed, tenth for Bayern, fourth for Liverpool and first for Roma. Leander Paes won his 43rd doubles match in Davis Cup, as India came back from 0-2 down to beat China 3-2 to be one step away from the world group. With this win, the 44-year-old who played his first Davis Cup doubles match 28 years ago stands alone on the doubles perch. Paes reached this landmark in his 56th tie. Of his 43 wins, 25 came with Mahesh Bhupathi, the current Indian team captain with whom he has shared a relationship of animosity for some years now. The next best in Davis Cup doubles wins is Nicola Pietrangeli of Italy, who took 66 ties to win 42 doubles matches. 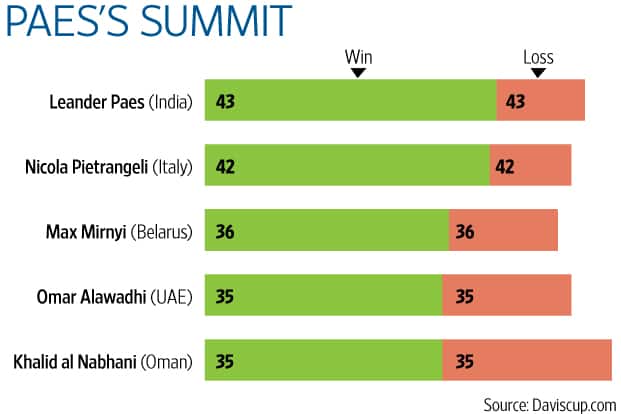 The Asian Development Bank (ADB), in its latest report, has projected for the Indian economy a growth rate of 7.3% in 2017-18 and 7.6% in 2018-19. Such growth rates should enable India to retain its tag of being the fastest-growing Asian economy. The ADB projected inflation to average 4.6% in 2017-18 and rise to 5% in 2018-19 due to higher global oil prices, food procurement prices and rural wages. 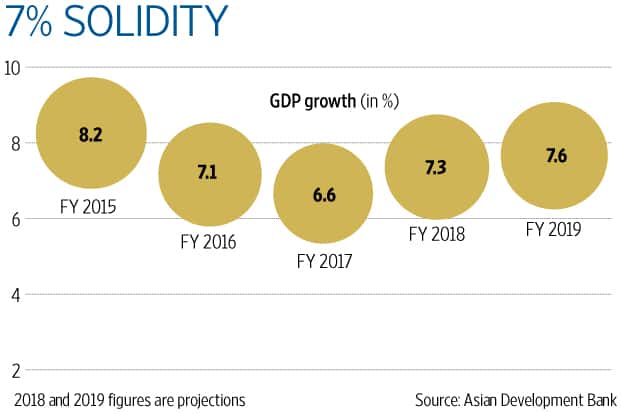 According to the Monster Employment Index, online hiring activities in March registered a year-on-year increase of 12%, but a marginal dip of 0.3% on a month-on-month basis. The Monster Employment Index stood at 292 for March 2018, compared to 293 in February 2018 and 261 in March 2017. The report said the government’s economic reforms have begun to have a positive impact on the economy, and that online hiring activities around key sectors such as production and manufacturing can be possibly attributed to it. 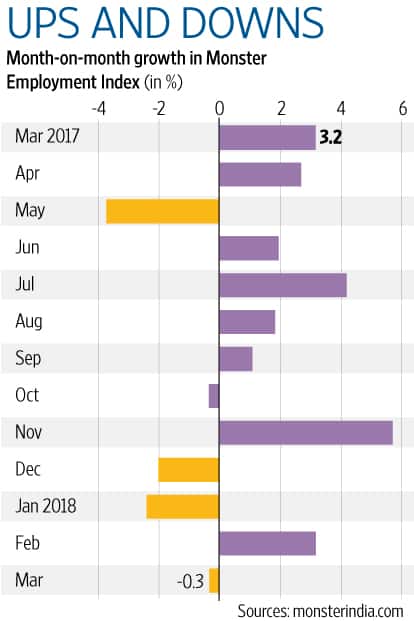 The country’s factory output, as measured by the Index of Industrial Production (IIP), grew 7.1% in February. Although it was slower than the 7.5% in January, February marked the fourth consecutive month of IIP growth staying above 7%, indicating that industrial recovery may be on track. The lower growth in February 2018 was mainly due to a decline in mining activity, while growth in other sectors was several times that in February 2017. 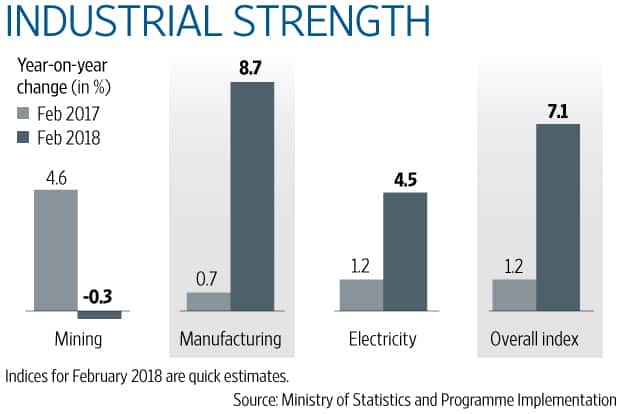 There are 6.5 million young voters—those between the age of 18 and 25 years—in Karnataka. Thus, they account for 13% of the electorate in the state, shows a fact sheet on the Karnataka assembly released by the Press Information Bureau. In all, there are 49.6 million people in the state who are eligible to vote, and 38% of them are in the age bracket of 25 to 40 years. 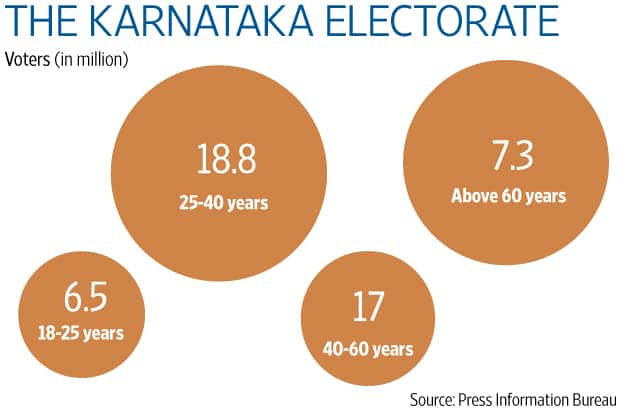