Reliance Industries Ltd’s standalone net profit crossed Rs8,000 crore for the first time in the December quarter. Other income played a role though, showed results declared on Monday. It rose by a third over the same period last year contributing Rs3,025 crore to profits. The main refining business fell short of expectations. The company’s gross refining margin rose from $10.1 a barrel in September to $10.8 in December. Its premium over the benchmark Singapore GRM was $4.1 per barrel. This is the lowest in the past three quarters. The company said that it would spend another Rs1 trillion on Reliance Jio. The telecom venture had enrolled 72 million customers as of December 2016. It is adding another 600,000 customers daily, according to the management. 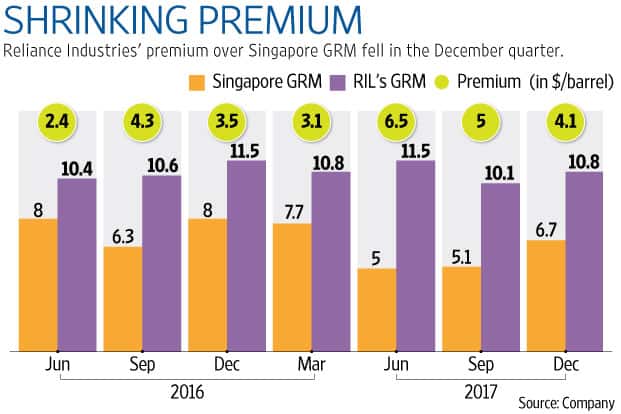 Domestic air passengers in India numbered nearly 100 million in 2016, showed data from the Directorate General of Civil Aviation (DGCA) released on Tuesday. This represents a near-doubling of air passenger traffic since 2010. There were more passengers per flight as well. IndiGo had the highest market share, at 39.3%. Jet Airways had 16.3%. Air India had 14.6%. Average seat occupancy rates from 76.6% in 2010 to 83.9% in 2016. India currently has 450 planes in service. Another 900 planes are on order, according to consulting firm CAPA. Budget airlines such as IndiGo have emerged as key players in the space. 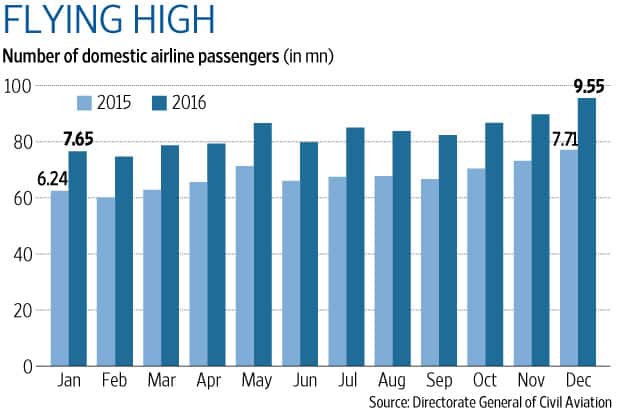 The central board of direct taxes (CBDT) has put a circular on taxation of indirect transfers on hold. Tuesday’s move is likely to provide some relief for foreign portfolio investors (FPIs). The earlier circular would have taxed their profits on equity market transactions. It would also have affected venture capital and private equity investors. Foreign investors made representations to the finance ministry after the 21 December circular. They had said that it would lead to double taxation as they already paid securities transaction tax and capital gains tax. The US is the biggest source of foreign portfolio investments in India. 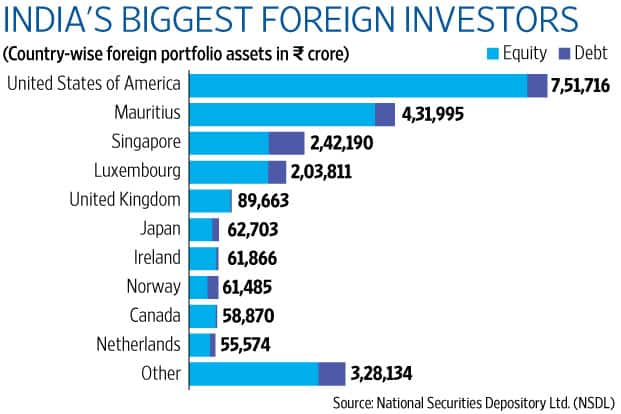 Private equity firm Warburg Pincus announced on Wednesday that it had bought a 14% stake in PVR Ltd for Rs820 crore. It bought the stake in India’s largest multiplex through an open market transaction. Multiples Alternate Asset Management sold a 9% stake. The promoters of PVR also sold stake in the deal which valued the company at Rs5,860 crore. Multiples will still own a 14% stake in PVR. The promoters will own 20%. The company’s shares have outperformed the Sensex in recent times. 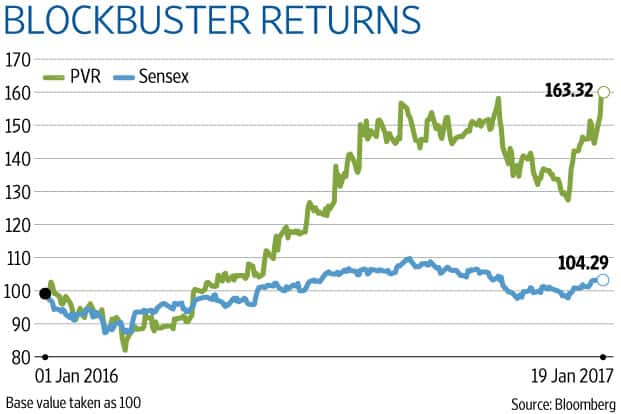 The International Monetary Fund (IMF) reduced its estimate for India’s economic growth from 7.6% to 6.6% in 2016-17. The cut was partly because of the disruption caused due to demonetization, according to an IMF official. The IMF made the change as part of an update to its World Economic Outlook report released in October. China’s growth was upped from 6.6% to 6.7% for 2016. The IMF follows a calendar year for most countries except India. It follows the April-March period for India. The updated figures were released on Monday. The government had pegged India’s growth at 7.1% for 2016-17 earlier in the month. The government’s figure has largely excluded the effect of demonetization, announced on 8 November since a large portion of the data used for the calculation is up to October. 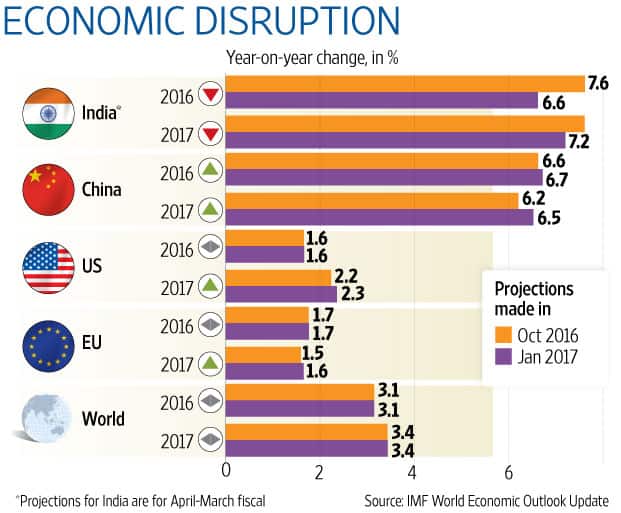 The Annual Status of Education Report (ASER) found disappointing results in its latest evaluation exercise for Indian school students. It noted in a report released on Wednesday that the overall learnings level is “pretty disappointing". The proportion of Class V children who can read a Class II textbook fell from 48.1% in 2014 to 47.8% in 2016. States which fared the worst include Arunachal Pradesh, Jharkhand and Assam. Manipur, Kerala, Punjab and Himachal Pradesh performed the best in the study.

Snapdeal’s loss more than doubled in the last year. The loss increased 150% from Rs1,328 crore in the year ending March 2015 to Rs3,316 crore for the year ending March 2016. Mint reported the numbers on Wednesday, noting that the numbers include payment platform FreeCharge’s operations as well. Snapdeal acquired FreeCharge in April 2015. Snapdeal in turn is run by Jasper Infotech Pvt. Ltd. While losses rose, revenue grew by 56% to Rs1,457 crore. The company had recorded Rs933 crore in the same period in the previous year. 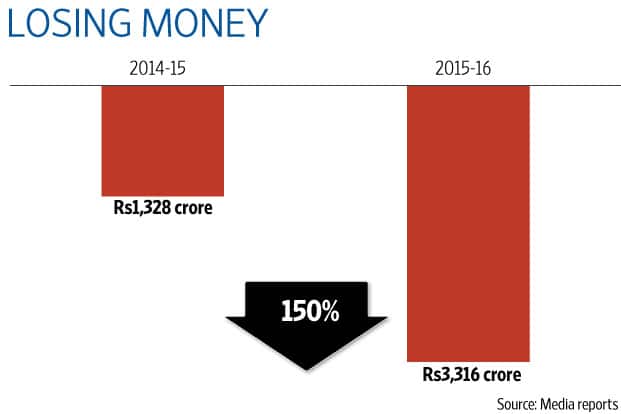 Chinese President Xi Jinping on Tuesday defended the need for globalization and free trade at the World Economic Forum in Davos. Newly elected US President Donald Trump had promised trade barriers and a 45% tariff on China-made goods during his campaign. Nobel laureate Paul Krugman has pointed out that Trump can use US trade law provisions to increase protectionism without legislative action. Krugman believes this could lead to a trade war across the world. Global production and supply chains would be disrupted and there could be significant problems before a new normal is arrived at. This would impact countries like China and India which have benefited from globalization. The share of emerging and developing Asian markets has moved higher in the world economy as measured by gross domestic product. Interestingly, the gains have not been as drastic for sub-Saharan Africa or the “Middle East, North Africa, Afghanistan and Pakistan" regions. The share of those from the Caribbean and Latin America have fallen.

The Reserve Bank of India’s data on bank lending shows that loans to infrastructure have fallen sharply over the last two years. This is in spite of the government announcing plans to build more roads and railways; and create more capacity for irrigation. Lending has dropped gradually from 12.8% in January 2014. The sectors which saw contraction included the power sector (down 10.4%) and telecom (down 6.3%), according to a Mint analysis on Thursday. Stressed infrastructure assets already on the books of banks may have affected lending. British American Tobacco Plc announced on Tuesday that it had reached an agreement for a $49.4 billion deal for control of Reynolds American Inc. The move comes around three months after an earlier bid was turned down. BAT subsequently offered a bigger deal, with more of the price being paid in cash as opposed to stock. Reynolds has grown profits faster than BAT over the last ten years. The combination of the two would create the world’s largest publicly traded tobacco company by revenue, according to Bloomberg. The deal is subject to regulatory and shareholder approvals. 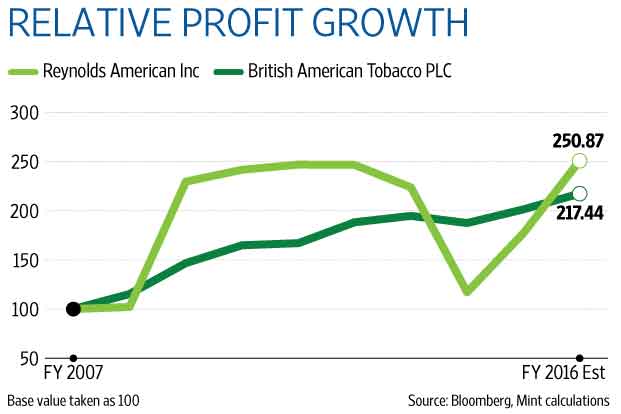