How do you remember the Bournvita Quiz Contest?

If you were a ’90s kid like this author, Sunday mornings would have included switching on Zee TV at 11am to see Derek O’Brien walking from behind psychedelically designed sliding doors and throwing general-knowledge questions at confident school kids from different parts of the country.

Go back a couple of generations and it would have been slightly different. Transistor radios were the spots around which families and friends gathered—mostly in English-speaking households though—to listen to a voice that’s still regarded as the stuff of legend.

His voice has naturally aged with time, but Ameen Sayani, now 82, did not seem to have lost any bit of his gusto as he narrated the story of his radio broadcasting career and how the Bournvita Quiz Contest (BQC) came to be, over a phone call. From hosting the popular Binaca Geetmala in 1952 (a weekly countdown of yesteryear Bollywood’s top songs, and arguably Sayani’s claim to fame) to S. Kumars ka Filmy Muqadma, Saridon ki Saathi (All India Radio’s first sponsored show) and the Bournvita Quiz Contest in 1976.

Sayani credited his elder brother and guru Hamid—the original host of the show—with the conceptualization of the BQC in 1972. Hamid Sayani hosted the quiz originally as a live contest across multiple cities before it became part of Vividh Bharati’s weekly schedule on AIR in 1973. His run continued for another two years before his untimely death and subsequently it was the younger Sayani who was asked to take up his role.

“I had been helping him with (the quiz) from the start and managed to keep it going for another eight years," said Ameen Sayani. A voice nearly identical to his brother’s certainly helped Sayani maintain the original feel of the show.

The BQC in its original avatar featured a team of three school students who underwent a preliminary test in their respective institutions to qualify for an all-India showdown in Bombay (now Mumbai).

Devangshu Datta, a consulting editor to the Business Standard newspaper, recalled how he and his teammates from St. Xavier’s Collegiate School in Calcutta (now Kolkata) were usual suspects on the show—they won the quiz thrice in a row from 1976 to 1978. “We took up these internal tests (qualifiers) during free periods—we had a lot of free periods," Datta said. “For us, it was the excitement of travelling all the way to Bombay and being put up at the Taj Mahal Hotel, besides seeing a live version of the famous radio programmes in the (AIR) studio."

For Sayani, it was a different ball game altogether, because up until then he had polished his accent for pristinely Hindi programmes. This was after several producers and his brother had asked him to continuously rehearse and take out the English and Gujarati peppering his Hindi.

A bit of the Hindustani hangover would go on to affect his otherwise unbroken run as BQC quizmaster, but only for a year in between (Sayani did not mention when exactly). “They used to change the executive director of the programme every couple of years. One of them suggested a woman anchor—a travel guide by profession—whose English they thought was better than mine."

Sayani said he did not want to mention who the replacement was even after all these years. So why did she last only for a year?

“Her English was good alright but she couldn’t get Indian names or pronunciations right. For instance, she could only say Mah-bah-rataaa or the Ram-aah-yanaaah. But she was a good girl, a nice person," Sayani said.

Sayani, however, said he used to meticulously rehearse and get all proper nouns—English or otherwise—right. This was the same discipline he applied while researching for questions.

The BQC question bank was originally the work of the clients or agencies partnering the show. This caused a lot of problems with factual accuracy, according to Sayani. “So we resorted to a British woman who had settled in Bombay with her Maharashtrian husband. She had earlier worked as a librarian and had the right resource material," Sayani said. Cover page of a Bournvita ‘Book of Knowledge’ from the early 1980s. Image courtesy Ameen Sayani.

These questions would eventually be compiled into the well-known series, Books of Knowledge. They were not for sale but had to be earned. Navin Jayakumar, a neuro-ophthalmologist based in Chennai better known as the quizmaster of the Landmark Quiz (which happens to be India’s longest-running open quiz), explained the process of obtaining a prized Book Of Knowledge. “All one had to do was send three labels from Bournvita tins to the head office in Bombay and wait for them to mail you a book. Each one of the books had the list of winning schools from 1972." 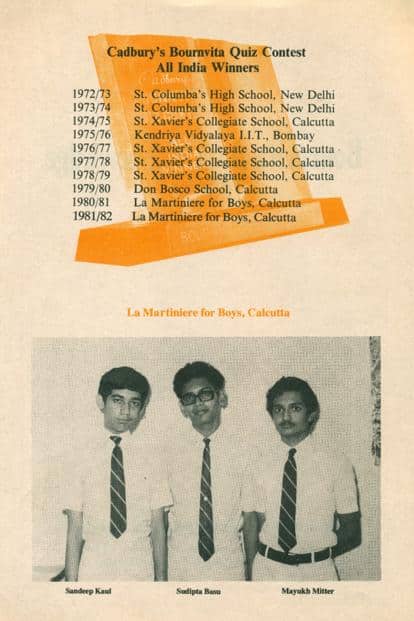 Inside the pages of the ‘Book of Knowledge’. Image courtesy Ameen Sayani.

“The schools which usually took part from the four main cities—Bombay, New Delhi, Calcutta and Madras (now Chennai)—were well-versed in quizzing. They were so good sometimes that they got toughies like: What was Joseph Stalin’s middle name? … Spot on!" Sayani recalled.

Of course, the show, like any other, has had its share of hiccups. “Once a school team claimed they lost out in spite of them getting an answer right. The answer I had in hand was plaster of Paris and they had said gypsum. So they returned the next day with their schoolbooks and said ‘Look! We had it right’," Sayani said. However, he had it cross-checked four or five times with other encyclopedias before convincing them that gypsum became plaster of Paris only after its water content was drained.

“I was otherwise very fair, very particular and stood by my decisions," Sayani said.

What exactly did it take for students to crack the BQC?

Datta said his team of three had it easy because each one of them had diverse reading interests. While his specialized areas spread over sports, military history, math puzzles and electronics, his teammates covered topics such as economics and science, he said. As for general trivia about India, it was the era of Emergency that served as a blessing in disguise. “It’s important to remember that patriotism was on a high around 1975. So even though we used our institute’s library a lot, newspapers like The Statesman ran frequent retrospectives on Indian history," Datta said.

The show’s cult effect can even be seen in modern Indian literature. Author Amit Chaudhuri in his book Calcutta: Two Years in the City (2013) writes how once upon a time, in the Calcutta that he grew up in, “Sunday reached its peak around midday with Ameen Sayani’s sonorities on the Bournvita Quiz Contest (which only had a following among proven devotees of radio)."

In her 2010 book The Mysterious Dreams, set in the backdrop of the late ’60s and early ’70s, Nandita Chakraborty Banerji describes how a Bengali couple’s early lunch was followed by the wife positioning a portable radio near their dining table “to broadcast Ameen Sayani’s booming voice anchoring the Bournvita Quizzzzz Contest".

For the food brand, it has been an association of more than 40 years. Giridhar Ayanur, an associate director for marketing at Mondelez India Foods Ltd, which currently owns the Cadbury and Bournvita brands, said India’s oldest quiz “has created an undeniably strong connect with generations of Indians over the past four decades and has constantly transformed with the times. Over the years, it has embraced latest advancements and leveraged radio, television and, now, a digital platform to connect with the audience and continuously improve the quizzers’ experience and engagement".

For schoolchildren in the 21st century, BQC would be all about YouTube, a mobile app and even online quizzes, with Derek O’Brien as its familiar face. It’s all about keeping in tune with the times. But every now and then, turn back a generation or two, just to realize that it was just a humble transistor radio powered by Ameen Sayani’s unforgettable voice that led to a phenomenon.

So, how do you remember the Bournvita Quiz Contest?