As widely anticipated, both price indices—the wholesale price index (WPI) and the consumer price index (CPI)—showed a decline for August. CPI stood at 3.66%, while WPI, which declined for the 10th straight month, came in at -4.95%. With the exception of certain commodities such as onions and pulses, the rest remained light on the pocket. The numbers are being watched ever more closely in the hope of a rate cut by the Reserve Bank of India, which has been given a fillip by the US Federal Reserve’s decision to hold off on an interest rate hike. However, a weak monsoon and the possibility of a spike in crude oil prices could dash those hopes. 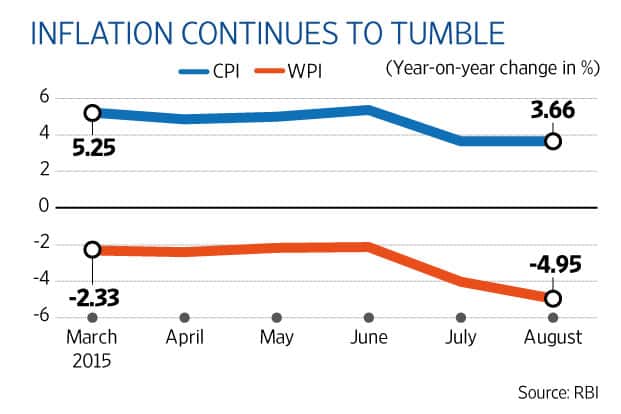 In the first-of-its-kind ranking of states based on ease of doing business and reforms implementation, carried out by the World Bank, as many as six states that topped the ranks are ruled by the Bharatiya Janata Party-led National Democratic Alliance. The study was conducted to take stock of reforms, including on tax procedures, land acquisition, labour laws, etc., implemented by states from 1 January to 30 June 2015, based on a 98-point action plan for business reforms agreed upon between the department of industrial policy and promotion and state governments. 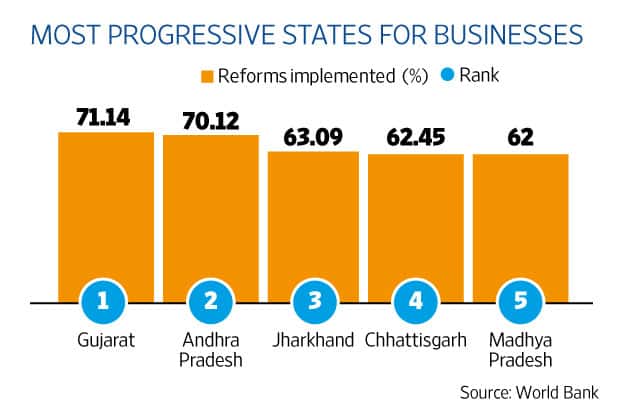 It took the death of a seven-year-old, after he was refused admission by five top hospitals in Delhi, to draw the nation’s attention to this year’s outbreak of dengue. However, data shows that this year is by no means exceptional. Dengue is a mass killer every year, with little abatement. As for the official numbers reported by the health ministry, many believe the real numbers to be as much as 100 times higher. 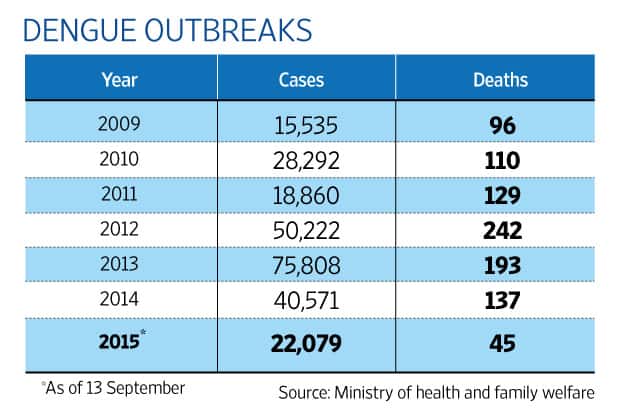 A study done by Capgemini and RBC Wealth Management on high-net-worth individuals in the Asia-Pacific showed that India and China led the rise in this elite section of the population. The two countries together represent 10% of the global wealthy and account for 17% of the global increase in wealth since 2006, and are expected to continue on the same path. The Asia-Pacific saw its population of rich people grow 8.5% in 2014 to 4.7 million, while wealth increased 11.4% to $15.8 trillion, leading all regions globally. Japan was excluded from the study. 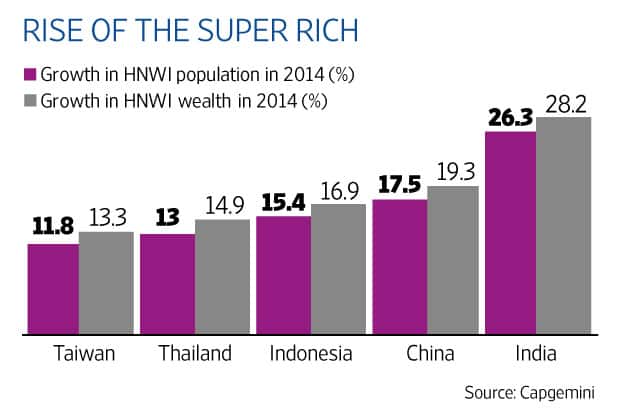 Hailed as the greatest boxer of his generation, Floyd Mayweather retired from professional boxing after comprehensively winning the last fight of his illustrious career against Andre Berto. He has never lost a fight as a professional boxer. Often derided for his defensive style, Mayweather spent most of his career contesting in the welterweight category (63.5-67kg). He has also topped the annual list of highest-paid athletes in the world several times.

6. Renewable energy gets a boost

In its aggressive pursuit of renewable energy targets, the centre cleared the long-pending offshore wind energy policy. According to the policy, the ministry of new and renewable energy will be the nodal agency for the implementation of wind energy projects, while the National Institute of Wind Energy will be responsible for allocating project sites. The projects can be set up within India’s exclusive economic zone, which extends to 200 nautical miles beyond its coastline. Offshore wind energy has massive potential, to the tune of over 100 gigawatts off the coast of Gujarat alone. 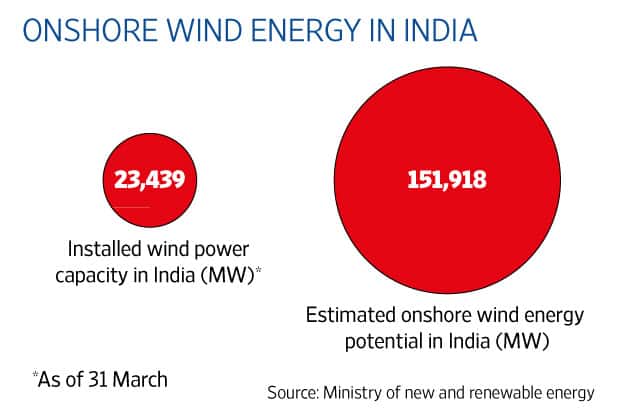 7. Bad news on the export front

The ninth straight month of falling exports meant more gloom for the Indian economy. Even without petroleum products, the contraction in exports stands at a steep 13.9%. Part of the fall in exports is in line with the slump in commodity prices. However, on account of tepid global growth, even volume growth has become tough. Imports also declined, though consumption-oriented imports such as gold and electronic items were notable exceptions, showing growth of 140% and 3%, respectively, year-on-year in August. Growth in electronic goods imports indicates a continued flow of telecom instruments from China. 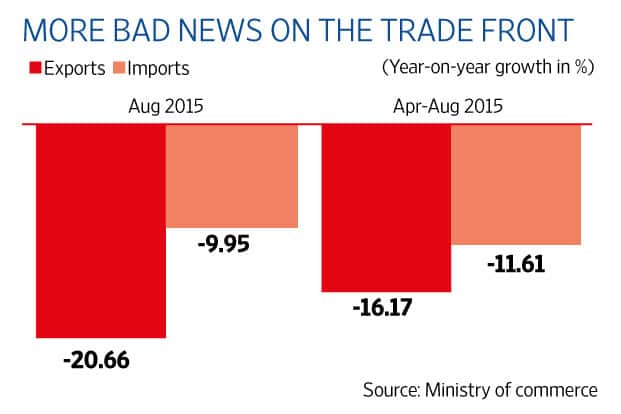 Following the prevailing uncertainties in global markets and in line with growing calls to defer an interest rate hike amid prevailing market volatility, the US Federal Reserve decided to keep the federal funds rate unchanged at 0-0.25% for now. The decision is expected to provide the markets a measure of relief as a rate hike would have spooked already weak investor sentiment in emerging markets. The decision will also provide the Reserve Bank of India more room to effect a rate cut during its next policy announcement on 29 September. 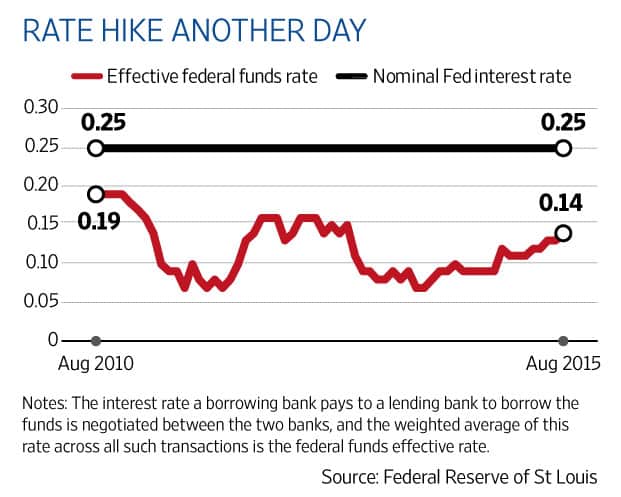 Domestic steel makers have welcomed a near-20% hike in import duty on certain categories of steel by the central government. The hike will stay in place for 200 days. The duty comes on the back of a huge surge in steel imports, mainly from China. The duty, classified as “safeguard duty", is a World Trade Organization-compatible temporary measure that is brought in for a certain time frame to avert any damage to a country’s domestic industry from cheap imports. India’s current account deficit (CAD) narrowed to $6.2 billion, down to 1.2% of GDP, in the first quarter of 2015-16, compared to $7.8 billion (1.6% of GDP) a year ago. This improvement was mainly on account of a contraction in the merchandise trade deficit to $34.2 billion during the quarter ended June, due to a larger absolute decline in merchandise imports relative to exports. The reduction in CAD was also enabled by higher net earnings through services and lower outflow on account of primary income (profit, dividend and interest), data released by the central bank showed. 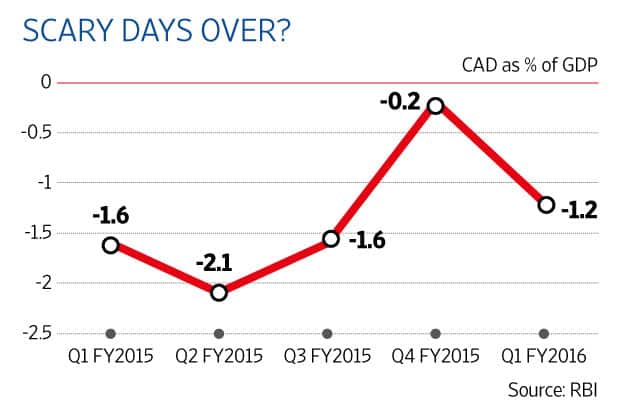