The willow in Kashmir weeps

Once the workhorse of the cricket bat industry, the Kashmiri willow is now being battered by a perfect storm of prices, taxes, unrest and dwindling raw material

Come fall, the landscape on the drive from Srinagar to Pahalgam is so captivating, that it takes little time to drift into a reverie.

Whether it’s the grandeur of the burly chinar trees, the purple haze of the saffron fields in Pampore or the dusky Jhelum river that silently snakes past in the opposite direction, nature is in bloom during the autumn months in Kashmir.

It then takes something quite startling—perhaps a little out of place—to snap out of the daydream amid this wonderland. As one approaches the patch of highway that runs past Sangam and Halamulla in Anantnag district, just before the town of Bijbehara and some 45 km from Srinagar, a shop selling cricket gear appears by the side of the road.

Like most stores, bats dominate the display and the wall hangings, amid posters that seem to celebrate the Indian and Pakistani teams alike. At first, it may seem like just another sports shop that caters to the children in the neighbourhood. But soon, four more storm past, and in the next few seconds, it is impossible to keep track of just how many are lined up adjacent to each other. On both sides of the highway. 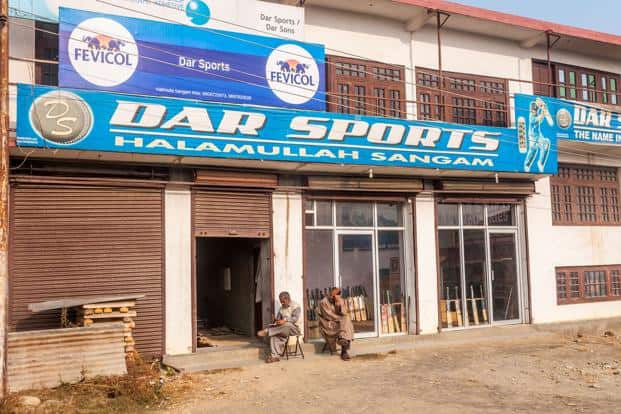 This nondescript 2km stretch of National Highway 44 (NH44) is one of the two places in the world that produce professional bats made of willow—the other being England. It is thus a common sight to see stacks of willow wood neatly piled up next to the shops, and sawdust dancing about in swirling clouds on the tarmac each time a car storms past these establishments.

Though the willow was believed to have existed in Kashmir centuries ago, a large-scale effort to plant it in the region was carried out during the 19th century on the advice of Walter R. Lawrence and J.C. Macdonell, who was then the head of the forest department of the state. Its early use was primarily as fuel and fodder for livestock. Lawrence, in his 1895 book, The Valley of Kashmir, writes:

“The vir, or willow, grows in every village of Kashmir where there is water or moisture, and its reproduction is very simple. There is an enormous waste of withies every year, as the young wands are cut down for fodder and after being stripped of their leaves are burnt for fuel. I have suggested that a Kashmiri should be sent to England to learn the basket industry. There is ample material in the valley to supply the whole of India with excellent baskets and chairs."

When the British brought with them cricket, there was a need to manufacture the bats locally, instead of depending on imports from England. According to research conducted by the faculty of forestry at the Sher-e-Kashmir University of Agricultural Sciences and Technology, Kashmir, that demand was met by Allah Baksh, a native of Sialkot (which is today in Pakistan). He set up the first unit at Sangam-Halamulla. It was the only facility at that time, and originally produced more hockey sticks than cricket bats.

“Back then, a lot of the equipment was made using the wood of the shahtoot tree. It then moved on to the willow and due to its quality, became famous around the world. Hockey’s popularity waned over the years and with it, the demand for hockey sticks also dropped, so the bat industry picked up after that," says Mohammad Maqbool, who has been running MMD Products for the last 40 years.

At the time, it was the only factory operating in the area and was the source of employment for some 30-40 households from villages around the area. Each family had at least one member working in the factory. When Pakistan was created in 1947, the owner moved back home to Sialkot and the factory was taken over by the current proprietors of Dar Sports, which is today the oldest in the area.

“My grandfather used to work in that factory," says Zuber Dar. “Everyone who runs a factory or a business related to bats was once employed there. Those who had learnt the tricks of the trade invested in their own set up, as a result of which, we have so many factories in this small stretch today. No one really considers taking up another job in this area."

Until 1980, there were around 30 units operating in this region. However, in the years following India’s World Cup triumph in 1983, there was an exponential rise in the demand for bats.

Today, around 20,000 people from the villages of Sangam, Halamulla, Charsoo, Pujteng, Bijbehara and Sethar, to name a few, either own factories or are employed in the industry as labour. There are some 300-odd units that operate in Sangam-Halamulla alone, generating an annual turnover of around Rs60 crore.

The willow wood, which goes by the scientific name of Salix alba var. caerulea, is sourced in bulk, usually from areas surrounding Anantnag. It is then cut into blocks called clefts and left in stacks to dry under the sun for up to six months.

Once ready to use, it is chiselled, hammered and polished by the workers into the finished product. A strong piece of wood, three feet in height and with a girth of 35-40 inches, will produce five full-sized bats. 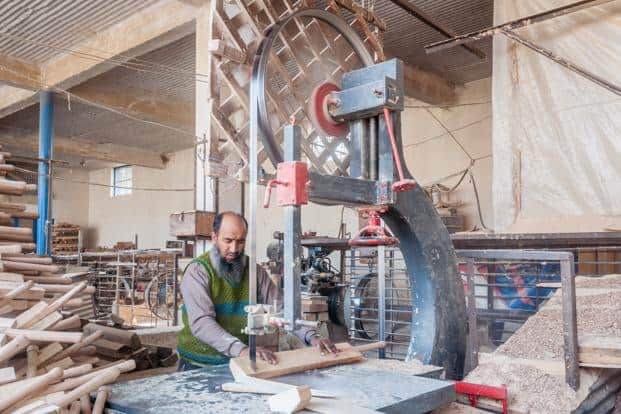 Depending on the resources on hand, a factory can produce anywhere between 30 and 250 bats each day. These bats are sold across India, and are exported to cricket-playing nations around the world as well.

In international cricket, the English willow is most preferred due to the quality of wood; its Kashmiri counterpart is considered heavier and harder, and is said to lack the punch while playing a stroke. However, the cost effectiveness of the Kashmiri willow makes it a good substitute and is consequently, more popular among budding and semi-professional cricketers. On average, a bat made of the English willow costs over Rs6,000, while one made of the Kashmiri willow starts at Rs800.

Cricket in Kashmir, though, has always played second fiddle to football at the professional level. With the region experiencing monsoon and snowfall for close to five months, cricket is mostly restricted to the mohallas, in addition to local tournaments during the summer months.

Every once in a while, the Jammu & Kashmir cricket team has had something to celebrate—although momentarily—even as they continue to seek consistency in the domestic competition, the Ranji Trophy. The bat industry then banks on the glitz of the Indian Premier League, World Cup wins such as in 1983 and 2011, and the frenzy surrounding the rare India-Pakistan clashes, for its sales.

Over the years though, the industry has had to deal with a lot of hurdles, both natural and situational. For starters, the willow that has been so giving over all these years has come under severe pressure. While the demand for bats has risen in the domestic and international markets, there are hardly any new trees being planted to compensate for those felled.

Most of the existing plantations are on private land and are being cultivated by individual farmers, rather than through a collective effort. Each willow tree needs at least 20-25 years to mature before it can be put to any use. Due to the investment in time, most choose to put the land to other use in search of quicker returns.

“These days, no one has the patience to wait so long before they can make money off the trees. A few are even hasty and fell young trees which cannot be used to make bats. We had willows growing in this area (Sangam-Halamulla) as well, but now you can mostly find them in regions such as Baramulla, Sopore and Kupwara," says Fayaz Dar, whose Alfa Sports is among the bigger factories in the area and has supplied bats to Kashmir cricket’s poster boy, Parvez Rasool.

“There is already a 40% increase in the cost of raw materials from five years ago. Besides, the day isn’t far when we are looking at a shortage of wood. A few like me have planted willows on private land; who knows when it will give me returns," adds Dar.

As a result, the amateur bats used by tennis ball cricket players are today made of poplar, which takes about five years to mature, is easy to access and hence, cheaper. It has reduced the pressure on the willow to a certain extent but these bats are of no use in professional cricket.

“The government must offer subsidy for those growing willow and hand out other financial assistance to encourage cultivation, else why would anyone invest so much time in it? In about five years, we are sure to feel the shortage of willow wood," says Ghulam Qadir Bhat, the president of the Cricket Bat Manufacturers Association. 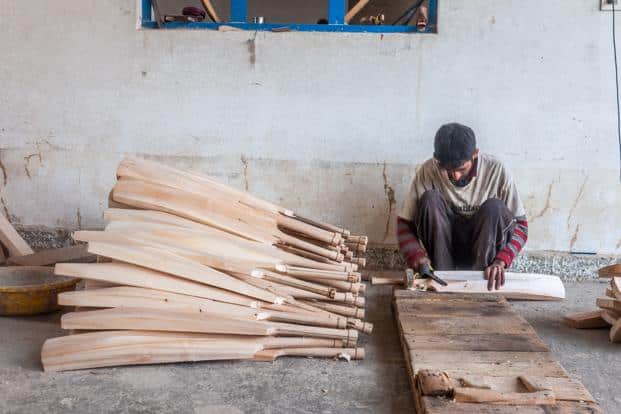 “We have requested the government to start their own plantations, so that there is an increase in the overall cultivation of willow. There are also other hybrid varieties that they can experiment with, which not only have the same strength, but also grow faster," he adds.

The patchy electricity in the area constantly afflicts this industry—with just two hours each day, they have to rely on diesel generators that escalates costs further. Then, there is the issue of 12% goods and services tax (GST) that has made business difficult. For instance, Alfa Sports reported sales of just 3,000 bats instead of the average 7,000 that they typically sell during November.

“There has been a drop in demand these days; besides, even if we manage to sell, there isn’t much profit as the customer is paying more due to GST. The moment we raise our selling price, the buyer either cuts down his order or simply refuses to take in stock. At the same time, our cost of labour remains the same," says Qadir.

The biggest blow though comes from the smuggling of the raw willow wood to centres such as Jalandhar and Meerut, which have their own bat-making units and a flourishing export industry.

Until the mid-1970s, a lot of the wood made its way to these manufacturing hubs. When the state government realized the importance of the wood and the potential of the industry, it restricted the number of clefts that could be sold outside.

The sales today are regulated by the Jammu & Kashmir Willow (Prohibition on Export and Movement) Act, 2000. However, locals claim over 25 lakh clefts are smuggled out each year—illegal consignments are frequently busted on the Pathankot-Jammu highway—leading to severe losses for the industry.

“The willow comes from Kashmir but someone else is milking the benefits. We tell the authorities to focus their attention on these issues, since it is such a big industry that employs so many people. They can start with at least planting willow, or in turn give us land where we can do so," says Maqbool.

Even at times when there were healthy orders, unrest in 2010 and 2016, and the flood in 2014, led to heavy losses that ran into crores of rupees. 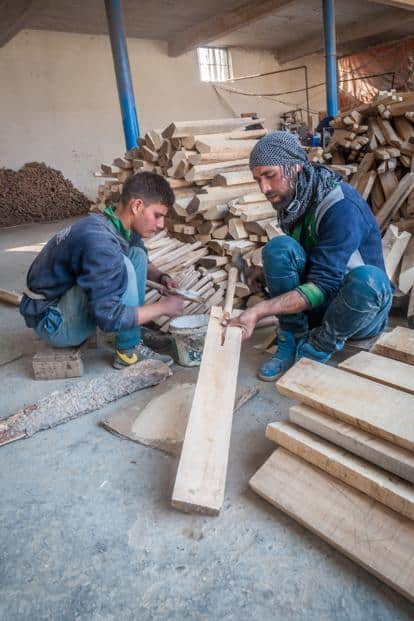 “In the last six months, we had a strike here. We cannot even work behind closed doors during these times, because any sound of machinery will draw attention and the boys will drop in to see if the facility is operational. If they find the factory functioning, there’s a good chance they’ll burn it down. Take 300 factories and their labour, and you can estimate the damage we’ve incurred," says Dar.

Given its unique craftsmanship, it’s about time someone bats for this industry before it meets a sorry end.

Shail Desai is a Mumbai-based writer.