Data released by the Society of Indian Automobile Manufacturers for August shows the total number of vehicles sold in India and exported came down to 1.62 million from 1.66 million a year ago, a reduction of 2%. However, this pattern was uneven. Exports went up by 8.66%. Within two-wheelers, sales of motorcycles tanked while those of scooters increased. In passenger vehicles, sales of utility vehicles fell by 4.07%, but those of vans and passenger cars increased. However, the 6% increase in passenger car sales in August comes after a 17.5% year-on-year increase in July. 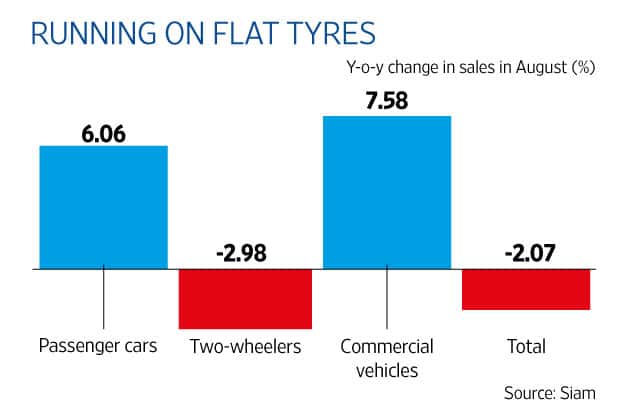 In the midst of high drama surrounding the important Bihar polls, the Election Commission has announced a five-phase schedule, with the counting of votes on 8 November. The election essentially pits a Bharatiya Janata Party-led coalition against a so-called grand alliance between Lalu Prasad’s RJD, Nitish Kumar’s JD(U) and the Congress, from which the Samajwadi Party has walked out. The former is yet to announce a chief ministerial candidate, with Prime Minister Narendra Modi leading the campaign, having addressed four rallies and announced a massive special package for the state. Home minister Rajnath Singh announced a 33% reservation for women in the paramilitary forces, including in the Central Industrial Security Force, at a passing-out parade of the force at the National Industrial Security Academy in Hyderabad. Currently, women comprise only 5.04% of the 136,000-strong paramilitary forces in India. The minister also said initiatives have been launched to take the total strength of the forces to nearly 200,000. Queen Elizabeth II became Britain’s longest serving monarch on 9 September, having been on the throne for 63 years and 216 days, surpassing her great-great grandmother Queen Victoria. Among living monarchs, she’s only beaten by King Bhumibol Adulyadej (Rama IX) of Thailand, who’s in the 70th year of his reign. On this rare occasion, the 89-year-old record breaker said it was not a record to which she had ever aspired. It took the motionless body of a three-year-old Syrian child washed ashore to cajole Europeans into action. So far, there has been intense bickering among European nations on the issue of shouldering the burden of refugees, a deluge of whom has been triggered by events in West Asia. Germany has taken the lead in persuading other European Union nations to accept greater numbers of refugees. The government has made yet another attempt to turn India’s household reserves of gold, estimated to be over 20,000 tonnes, into financial assets. Now, gold owners can deposit their gold—after purity checks—in a bank, and earn interest income on it. However, doubts are being cast on the chances of success of the scheme, mainly for two reasons. First, since the deposited gold will be stored in the form of bars and coins, jewellery holders might not be willing to part with their ornaments. Second, the quantum of interest needs to be fairly high to attract depositors. 7. India not isolated from global meltdown

The shockwaves that had their epicentre in Shanghai continue to rock the stock markets of most emerging nations, including India. To make things worse, speculation is rife about an impending rate hike in the US. This has resulted in the net outflow of foreign portfolio investor money from India, a complete turnaround from the heady days of last year when jubilation around the BJP’s victory resulted in massive inflow of foreign money to Indian equities. The benchmark Sensex slipped below 25,000 points on Monday, though it has recovered somewhat since. Tim Cook unveiled the latest iPhone, labelled 6S, which will go on sale in parts of the world on 25 September, though Indian consumers will have to hold their breath a little longer to get their hands on the premium product. “The only thing that’s changed is everything," said Apple. The most anticipated feature of the new phone is the so-called 3D touch, which responds to the duration and pressure of touch on the screen. A light touch gives a peek into the apps, while a harder one lets the user delve deeper. 9. Can a meeting resolve issues?

Prime Minister Narendra Modi met with leaders of Indian industry and urged them to take risks and invest. The agenda of the meeting was “Recent Global Events—Opportunities for India". The meeting comes in the wake of a big reduction in investments by the private sector, which has seen tepid growth in revenues and profits over the past few quarters. Top cabinet ministers, bankers and Reserve Bank of India governor Raghuram Rajan were also present at the meeting. To address the issue of call drops and poor connectivity, the cabinet has allowed the long-awaited trading of radio spectrum between telecom companies. The decision has been welcomed by experts, who say it will lead to consolidation in the telecom sector, as well as reduce aggressive bidding during spectrum auctions. Trading will allow struggling operators to sell unused airwaves to others, resulting in a way out for them, as well as better mobile connectivity. The decision was followed a surge in share prices of all major telecom firms.