1. India’s domestic air traffic growth in October back above 20% 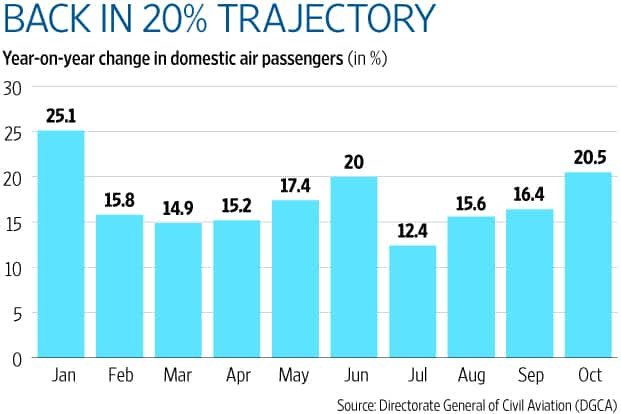 Presenting the UK budget, chancellor Philip Hammond referred to Britain as the “world’s sixth-largest economy", citing GDP (gross domestic product) forecasts from the International Monetary Fund (IMF). In 2016, as per the World Bank, UK was fifth and France sixth. But growth figures show France edging out Britain for the fifth spot—a gap that is expected to widen in 2018 following Britain’s decision in mid-2016 to exit from the European Union. The British government pared the growth forecast for 2017 from 2% to 1.5%. When he notched up his 18th century in the format during the first Test match between India and Sri Lanka in Kolkata, Indian cricket captain Virat Kohli became only the eighth cricketer in the world to reach 50th international hundreds. This elite list is led by Sachin Tendulkar, who finished with 100 centuries, followed by Ricky Ponting of Australia with 71. However, in terms of frequency of hundreds, Kohli is presently ranked first on this list, averaging a hundred per 6.96 innings. But he still has a long haul to Tendulkar. At Kohli’s current age of 29 years, Tendulkar had 65 hundreds. The latest edition of the biennial cricket series between Australia and England, the Ashes, got underway on Thursday at Brisbane. In the last 10 Ashes series dating back to 1998-99, there’s a current of home advantage. England have won four of the five series they hosted, much like Australia. The last time England won a series in Australia was in 2010-11—3-1, with all three wins being by an innings margin. Following the loss of talismanic all-rounder Ben Stokes, they are not being tipped to repeat their 2010-11 feat. The Bharat 22 Exchange Traded Fund (ETF), launched by the government of India and managed by ICICI Prudential Mutual Fund, closed for subscription with a demand of four times. As a result of this high demand, the government increased its issue size from Rs8,000 crore to Rs14,500 crore, providing a boost to its disinvestment collections. With this, it would have raised Rs52,000 crore from disinvestment in 2017-18—the highest-ever and 72% of its 2017-18 target of Rs72,500 crore. After much sparring between the BJP and the Congress over the holding of the Winter Session of Parliament, the government is planning to convene it on 15 December—a day after the conclusion of the Gujarat assembly elections. The Winter Session generally starts from the third week of November and goes on for about 30 days. This time, the government did not convene the session at the usual time, citing the Gujarat elections. In the past eight years, the average duration of the Winter Session has been 28 days and it has been truncated only once—in 2013. Bitcoin scaled a new all-time high on Wednesday of $8,236, just four days after it crossed $8,000 for the first time ever. This marks an increase of around 11 times from a year ago, when it was trading at around $737. The price could be because of the possibility of inflows of institutional money in crypto-currency markets, though some have been warning about bitcoin being in a bubble. 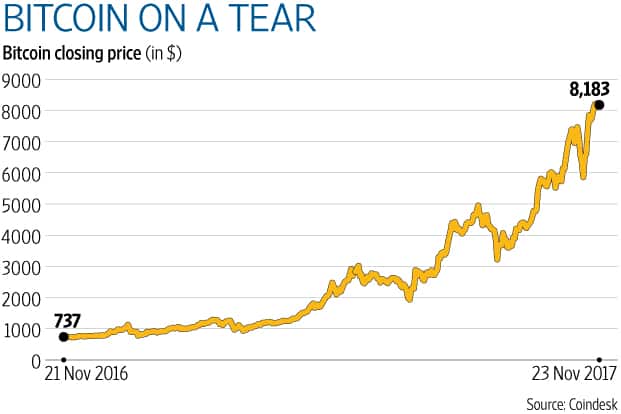 The Indian Institute of Technology Bombay (IITB) and the Indian Institute of Science in Bengaluru are the top two Indian universities in a list that ranks the best varsities in Brics countries, according to Quacquarelli Symonds Ranking 2018. They rank ninth and tenth, respectively. Seven of the top eight universities are from China, led by Tsinghua University. Rounding off the top 10 is one university from Russia. Lower down, IIT Delhi was ranked 17, IIT Madras 18 and IIT Kanpur 21. The Indian government on Thursday passed an order to set a minimum price of $850 per tonne for the export of onions, following domestic prices increasing to two-year highs. The price was around Rs2,350 per quintal at Lasalgaon, Maharashtra—India’s largest wholesale onion market—about a fortnight ago, and Rs3,600 per quintal on Thursday. The floor price for exports will stay till the end of the year.