Files Go belongs to Google's new set of apps designed for the new Android Oreo (Go Edition) OS, but is available on Play Store for all

Google has announced a lighter version of Android Oreo, called the Go Edition, for entry level smartphones with less than 1GB RAM and limited storage. While the operating system has been optimised to run smoothly on modest specs, Google has also decided to replace its regular set of apps such as Google Assistant, Google Maps, Gmail and YouTube with their lighter ‘Go’ version.

A few of those apps have also been released for all. YouTube Go was launched a few months ago. Now, Google has released its file manager app called Files Go on the Play Store. Like most Google apps, it is free to download and use.

Basic elements of a file manager app such as the option to see the size of a folder or move files from one folder to another to free up space are already built into the Settings-> Storage in all Android smartphones running version 6.0 or higher, but with Files Go, a user can do a lot more.

One of them is the app’s small footprint, in line with the philosophy behind the Go apps. 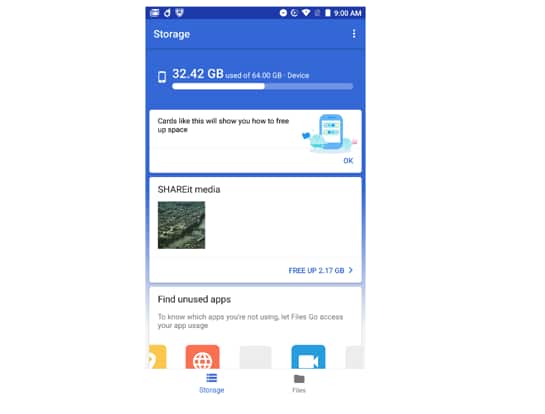 It takes up just 13MB of space after installation, which is less than some of the popular file manager apps on Google Play Store. Asus’ File Manager app takes up 28MB while the ES File Explorer occupies 47MB of space. This will not make a big difference in mid or high-end smartphones, but will mean a lot in entry level smartphones, which offer 4GB storage out of which only half is available to user.

Too many files and folders can clutter file manager apps. Most apps still offer a conventional layout with folders lined up in a single column. This makes looking for specific files a little difficult.

Google has tried to address it by offering a different layout from what we have seen.

The homepage shows a bunch of cards similar to Google Now feeds. They provide personalised suggestions on how to free up space, which files are taking up more space than others, which apps are lying idle and have not been used in a long time. It can also detect and highlight duplicate photos or videos using Google’s mobile vision technology, which uses detectors to locate and describe visual objects in them.

The other feature that makes the Files Go stand out is the built-in file transfer tool, which lets users send/receive any file from another smartphone in vicinity (with Files Go app on it too) without involving Bluetooth or internet connection. It works on the lines of ShareIt and creates a wireless network between two devices to transfer data. 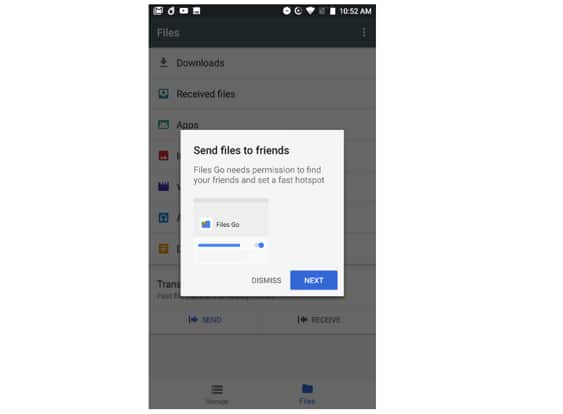 Google claims all file transfers are encrypted and can be carried out at speed of up to 125 Mbps.

Like most Google apps, Files Go is also linked to some Google apps such as Google Drive, allowing users to back up any file they want on cloud without leaving the app.

The app automatically clubs all files based on categories such as images, videos, apps and documents. But a lot of file manger apps are doing that these days.

The new layout can be a bit frustrating for users who have got used to seeing all the folders on the phone in one place. So if a user moves a folder from a PC to their smartphone, they can’t see the specific folder with all its elements at one place.