The global market size of open-source services is expected to grow from $11.40 billion in 2017 to $32.95 billion by 2022, according to a report by MarketsandMarkets published in February.

There are many reasons for this growth. First, an open-source office software allows users to update to its newer version without a one-time licence fee, unlike Microsoft Office, which requires users to pay even if they have to upgrade from Office 2016 to Office 2019. Second, while Office 2019 can be installed only on a fixed number of PCs, beyond which users have to buy more licences, there are no such restrictions when it comes to open office suites. The basic version of most open office suites, which include tools for document creation, database management and presentations, is free. Users pay only if they opt for professional and server editions. For instance, the cloud edition of OnlyOffice, which covers 11 to 20 users, costs $75 per month. Thereafter, one has to pay $5 for every new user. 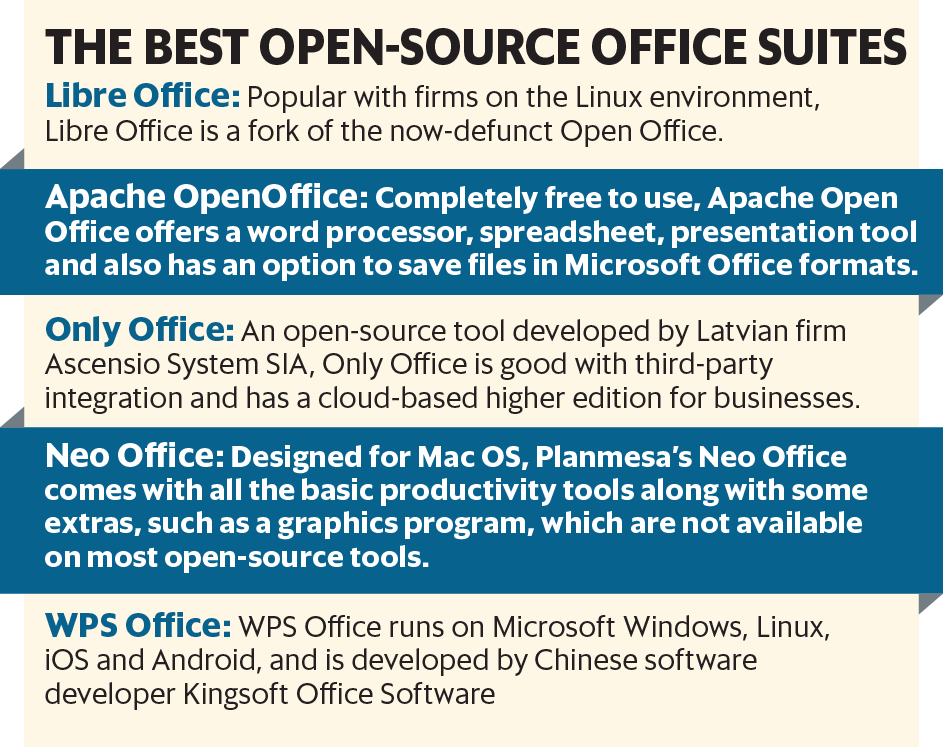 Rajesh Batra, chief information officer at Kokilaben Dhirubhai Ambani Hospital, Mumbai believes “competition is finally catching up with Microsoft Office". “When I checked Oracle Open Office and WPS recently, they came very close to Office 2016, which I use. Earlier, macros (a bunch of repetitive tasks that can be automated in Excel) did not run on them, which is why many had to switch to Microsoft Office. Now, they work with WPS and Oracle Open office."

Office 2019 for home and business costs $249 (approximately ₹ 18,342) and is a one-time purchase for a single PC or Mac. Office 365 premium for business, which provides access to cloud services is priced at ₹ 660 per month per user.

According to Sanchit Vir Gogia, chief analyst, founder and CEO of Greyhound Research, a lot of organizations are using open source tools because they are ad-free, and cost-effective. “Different organizations have different reasons to go open-source. While the cloud-based Office 365 suite is very powerful, it costs a lot of money for an organization when the number of people using it end up in thousands, unlike on-premise licence-based tools such as Office 2019, which in terms of unitary prices (per license per device per user pricing) costs less," he says.

“Microsoft", Gogia concludes, “will claim it (Office 2019) costs less than a cup of coffee. But...when we look at in at the totality of numbers, it (the cost) is much higher."