HP leads a resurgent PC market in India, but a slowdown could happen again: Report

After months of decline and a rather bleak scenario, PC shipments have gone up in the last few months, claims IDC’s (International Data Corporation) latest Quarterly Personal Computing Devices Tracker for the September quarter for the Indian market. About 3.03 million PCs, which includes laptops and desktops, were shipped between July and September, registering a strong quarter-on-quarter (q-o-q) growth of 72.3% and year-on-year (y-o-y) growth of 20.5%.

This comes as a big surprise, after the struggles of the PC makers in the June quarter, when shipments fell by 18.9% (q-o-q) and by 18% (y-o-y), with only 1.75 million units shipped in that quarter.

IDC analysts believe the PC OEMs are likely to hit the wall again in Q4 2017. “The India PC market in the December quarter is expected to decline due to seasonality and reduced consumer demand after the high consumer spending in the September quarter. However, going forward, the excitement around gaming PCs and price drops after GST (goods and services tax) will remain important factors for the consumer segment," said Navkendar Singh, associate research director, IDC India. 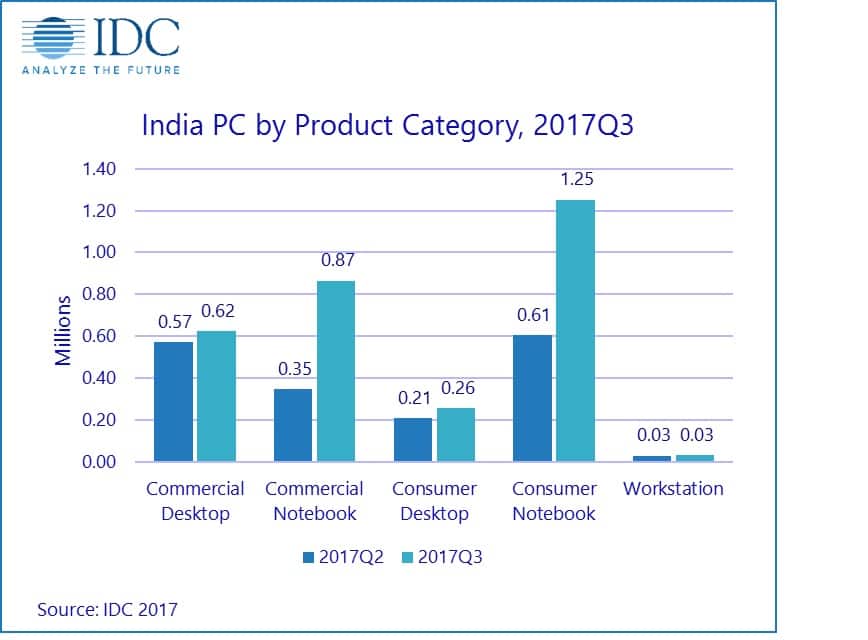 The report points out that it is not just the big commercial projects which are driving the sale. About 1.51 million units were shipped for consumer market, which is an increase of 85.4% over the June quarter. “Seasonality and online festive sales drove positive consumer spending throughout the quarter despite declining consumer sentiment on the back of low employment opportunities, income and price levels," said Manish Yadav, associate research manager, client devices, IDC India. For commercial purposes, including educational projects and business, 1.52 million units were shipped in the September quarter.

In terms of market share, HP continues to lead the pack. It registered y-o-y growth of 30.2% and controlled 31.1% of the market in the September quarter. IDC attributes its success to state-owned projects and strong demand int he consumer market. It held 33.8% market share in the June quarter. Lenovo has emerged as the second biggest OEM in India with a market share of 24.1%, with a registered growth of 30.9% compared with the same period last year. Its sales were largely driven by demand in the commercial market, especially enterprises. Its market share in June quarter stood at 16.9%.