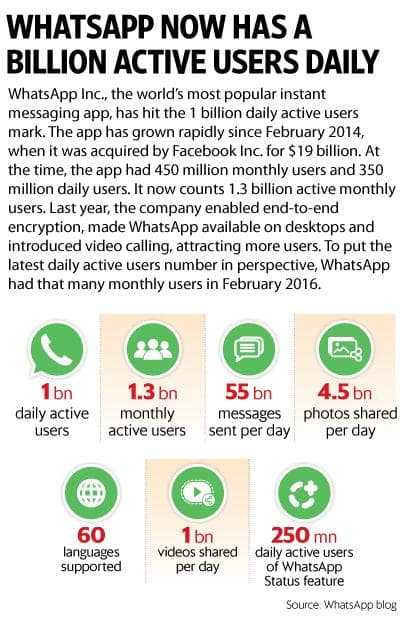 Its monthly user base—people who use WhatsApp at least once in a month—stood at 1.3 billion. The Facebook-owned company said about 55 billion messages and 4.5 billion photos are shared every day globally on its platform.

The app, which supports 60 languages, also sees 1 billion videos being shared on a daily basis. India is the largest market for WhatsApp with over 200 million monthly active users as of February 2017.

The company did not disclose what percentage of the 1 billion daily users are from India. WhatsApp competes with messaging apps like LINE, Viber and Hike in India.

In February 2014, WhatsApp was acquired by social networking site Facebook, its biggest buyout till date, for a whopping $19 billion. Previously, WhatsApp said its service has seen strong uptake, specially across developing nations such as Brazil, India and Russia.