Thanks for Visiting Mint
You seem to have an Ad Blocker on. Please turn it off in order to continue, or whitelist Mint
HOW TO TURN OFF AD BLOCKER
OR
REFRESH IF YOU ALREADY TURNED OFF THE AD BLOCKER
Home >Technology >Gadgets >Five smartphones that run original Android Oreo interface

Buyers don't have to spend a lot of money to get smartphones running the latest version of Android Oreo with clutter-free interface. Here are some of the options under Rs15,000

The latest version of Google’s mobile OS, called Android Oreo or Android 8, has been out for months but the adoption remains slow. According to Android Developers blog, only 4.6% of Android smartphones are running Oreo, as on 16 April. Google has released a lighter and optimised version of Oreo dubbed as Go Edition, to encourage adoption of Android Oreo in entry level smartphones. If you have been looking for an affordable smartphone which not only runs the new OS but also remains true to the pure Android interface, here are some options you can consider.

Lava Z50 is the most affordable Android smartphone to offer Android Oreo out of the box. It runs the Go Edition of Oreo with the unadulterated stock Android user interface. It also supports 4G and comes with a 4.5-inch screen with resolution of 800x480p and an unspecified version of GorillaGlass on top. Driving the smartphone is MediaTek’s modest MT6737m processor with 1GB RAM and a 2,000mAh battery. Internal storage stands at 8GB with the option to add 64GB more via microSD card. Buyers can get it an effective price of Rs2,400 if they buy it with Airtel’s cashback programme. 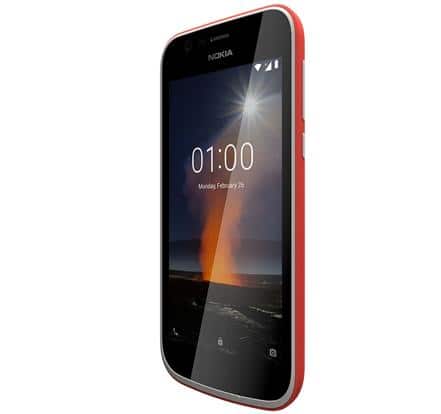 Available in warm red and dark blue colours, Nokia 1 runs Android Oreo (Go Edition) out of the box with stock Android UI. It has a 4.5-inch screen with resolution of 800x480p and the back panel is made of polycarbonate plastic. The smartphone supports 4G, runs on MediaTek’s MT6737m quad-core processor with 1GB RAM, packs in a 2,150mAh battery and offers 8GB internal storage with the option to expand it to up to 128GB via microSD card. Reliance Jio is offering a cashback offer of Rs2,200 on the Nokia 1, bringing the effective price down to Rs3,299.

Asus has the raised the specs benchmark in the budget segment with the new ZenFone Max Pro M1. It offers a big 6-inch screen with resolution of 2,160x1,080p, packs in long lasting 5,000mAh battery and is powered by Qualcomm’s powerful Snapdragon 636 octa-core processor. The only other smartphone to use the processor is the Redmi Note 5 Pro, but it costs Rs3,000 more. The smartphone also runs Android 8.1 with stock Android interface, which looks a lot simpler in comparison to the ZenUI which is what most Asus smartphones are pre-loaded with. It was launched with Android Nougat, but, as Google had promised, was updated to Oreo in January 2018. Xiaomi’s Mi A1 is a metal clad smartphone and has an eye-popping red-coloured variant. The Google connection not only ensures the next (Android P) update, but also brings the stock Android experience and unlimited cloud storage for images in original resolution. The Mi A1 is also a powerful smartphone and runs on Qualcomm Snapdragon 625 octa-core processor with 4GB RAM. It has a 5.5-inch screen with resolution of 1,920x1,080p and offers dual rear cameras with 2x optical zoom. Nokia 6.1 is part of Google’s Android One program, which means assured Google updates for two years. It is running Android 8.1 out of the box with a hardly any third party apps. The icing on the cake is the powerful innards. HMD Global has used Qualcomm’s Snapdragon 630 octa-core processor to take on the likes of Xiaomi and Asus. Another major upgrade is the 16-megapixel camera powered by Carl Zeiss optics. The smartphone packs in a 3,000mAh battery, has a 5.5-inch Full HD display and offers 32GB storage with the option to add more via microSD cards. The slab like design with flat edges and back gives it a distinct look and also feels grippy in the hand.