New Delhi: At a time when calls for protectionism are growing across the world, the ability of economists to intervene and influence this debate seems to be lower than ever before. One reason for this might be their limited effectiveness as communicators, a new study suggests.

The study by Marina Della Giusta and colleagues from the UK-based University of Reading shows that the most popular economists tend to tweet less, mention less, and mention fewer users than a comparable group of experts in the sciences. Giusta and her co-authors also show that economists use less accessible language and a more distant tone compared to scientists.

The yet-to-be published study, presented at the ongoing annual conference of the Royal Economic Society in the UK, is based on an analysis of 64,121 tweets from 25 top economists and 63,472 tweets from 25 top scientists. Mint has reviewed a draft copy of the study.

The most popular economists were identified based on the rankings provided by the website IDEAS, which provides a list of the most-followed economists on Twitter. The list is updated daily, and the cut-off for selection was 6 April 2017.

A comparative sample of popular scientists was drawn from a Science magazine list published in 2014. The last 3,240 tweets from each person on the list were included in the final analysis. The top three economists in the researchers’ list are Paul Krugman, Joseph Stiglitz, and Erik Brynjolfsson. The top three scientists are Neil deGrasse Tyson, Brian Cox, and Richard Dawkins.

The researchers show that scientists tend to use less complex language and use abbreviations less frequently compared to economists when using Twitter. Scientists also tend to use inclusive pronouns (we, our) twice as often as economists, drawing others into their conversations more often on the social networking site. The study by Giusta and her co-authors adds to a growing body of evidence which points to the insularity of the economics profession. In an age of hyper-specialization, all academic disciplines have tended to become insular. But the insularity of economics is markedly higher than in any other discipline, a 2015 Journal of Economic Perspectives (JEP) study by researchers Marion Fourcade, Etienne Ollion and Yann Algan showed. Based on an analysis of citations in top social science journals between 2000 and 2009, the researchers showed that articles in the American Political Science Review cite the top 25 economics journals more than five times as often as the articles in the American Economic Review cite the top 25 political science journals. The asymmetry is even starker with regard to the American Sociological Review . 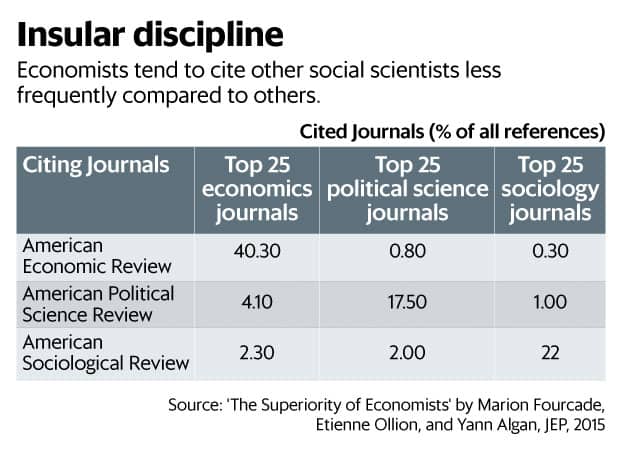 Opinion surveys seem to point to the same trend: other social scientists and even business school professors’ value inter-disciplinarity far more than economists.

The insularity of the dismal science and the “distance" economists maintain from the general public limit their effectiveness in public debates, according to Giusta and her co-authors. The lack of engagement with other disciplines may be one reason why the discipline faces a credibility crisis today .

The credibility crisis can be addressed if economists are more transparent about their findings, and make an effort to talk to people rather than talk at them, Giusta and her colleagues argue.