Rahul is finishing dinner with his friends at a suburban Mumbai restaurant. He calls for the bill, takes out his smartphone and uses his Quick Response Code (QR)-code enabled United Payments Interface (UPI) app to pay the bill. He clicks a picture of the bill and sends it to his friends on WhatsApp, who all transfer their share directly from their bank account to Rahul’s bank account using the payment button on WhatsApp. They call for cabs on their smartphones, all of which have been prepaid using their mobile wallets. On his way home, Rahul recharges his (direct to home) DTH connection, pays his electricity bill, orders groceries and makes the payment directly from his bank account using his UPI app. More than 10 payment transactions done, and no cash exchanged. This is not crystal ball gazing, but each of these transactions are possible today—right here in India.

The last 24 months have seen amazing shifts in the digitization of payments in India. Demonetization provided a strong impetus for consumers to move to non-cash payment methods, and while the transaction levels seen in the months immediately post demonetization have not sustained, a new normal has been found. Increase in adoption of digital instruments has been aided by the increase in merchant outlets, as well as proliferation of UPI that provides a simple and convenient way to transfer money across bank accounts. The number of merchants accepting card payments has more than doubled in the last two years to cross 3 million, and the number of UPI transactions almost touched 250 million in June 2018. Overall, the proportion of cash transactions in the total consumer spending in the country has come down from 78% in 2015 to 68% in 2017 (Source: Euromonitor).

Interestingly, a large part of the activity in the digital payments space has been led by non-banks. PayTM, one of the leading mobile wallets in the country, claims to have acquired more than 5 million merchants using QR code, a technology which has gained significant prominence in developing countries like China. Digital giants like Google and Facebook offer seamless payment services leveraging UPI through Google Pay and WhatsApp Pay respectively. E-commerce companies like Flipkart also offer payments solutions through PhonePe. We expect digital payments to evolve rapidly over the next few years, and non-cash spend to overtake cash spend by 2020. 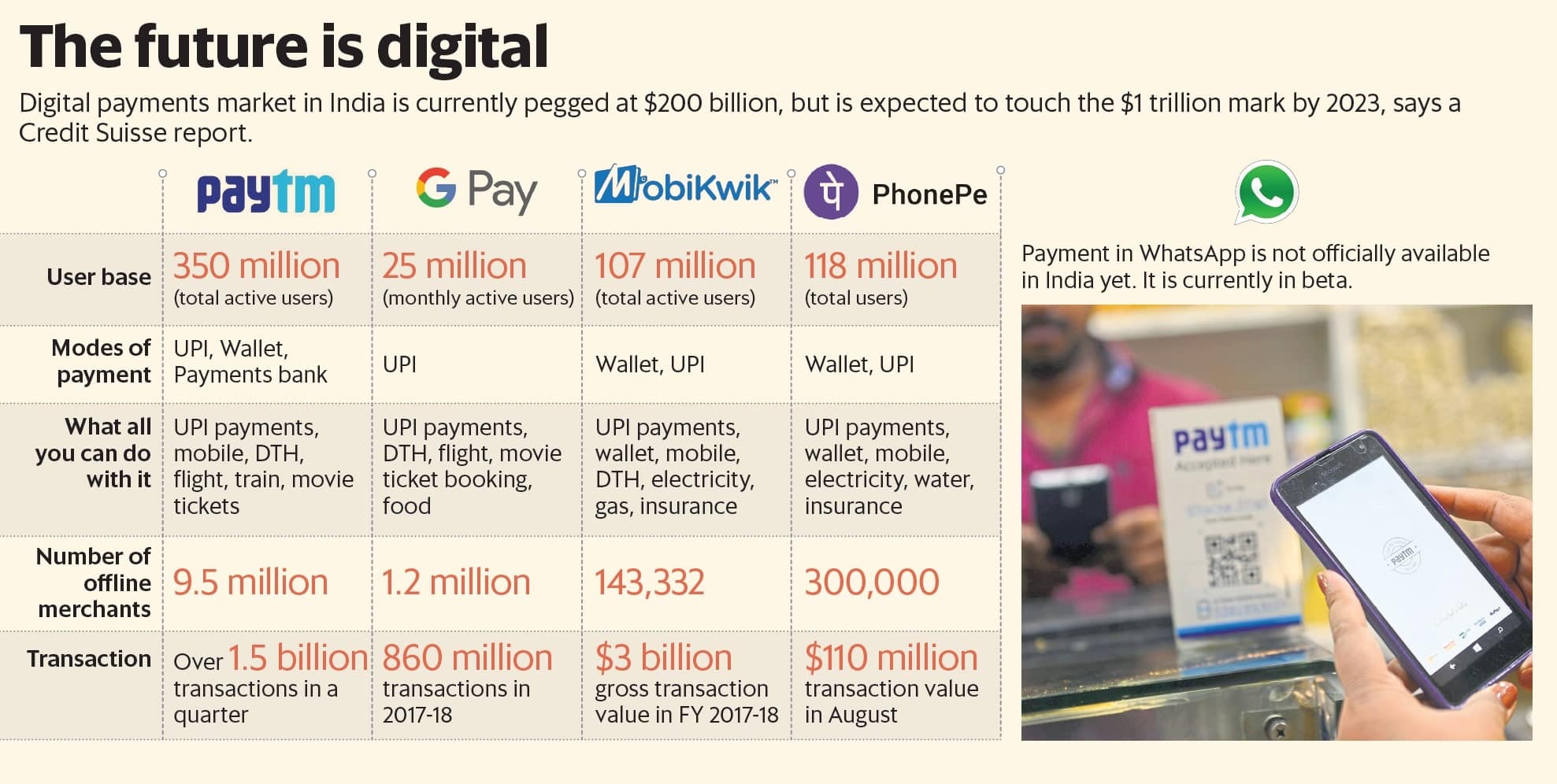 The top five trends that we expect to play out in the country are:

While the technology underlying UPI, which enables instant payments from one bank account to another, is path-breaking, there is friction in creation of the virtual payment address (VPA)—the alias which is used to transfer money on UPI. Consumers find it cumbersome to log on their internet or mobile banking app to create the VPA. However, third party providers who have built payment apps on top of UPI using open APIs (application program interface) have made this process convenient, almost invisible. We believe this will enable many more consumers to get on-boarded on to UPI and use it for peer-to-peer payments.

Deployment of QR code technology for digital payments at merchant outlets eliminates the use of expensive EDC (electronic data capture) machines or (near field communication) NFC (near-field communication) devices, and improves the economics of merchant acquiring. We believe that riding on this, more than 10 million merchants will accept non-cash payments in the next couple of years.

Mobile phones will be the payments instrument of choice. Traditional acquiring models will get disrupted, and new-age acquirers will offer value added services to merchants in order to make acquiring business economically viable.

Driven by both government incentives as well as competitive pressures, the economics of payments transactions have been continuously declining. The Reserve bank of India has capped the merchant discount rate for debit card transactions at 0.4% (for small merchants). Most fintech firms are offering payments services for free. We believe this downward trend will continue, where payments will be offered for free and players will look to monetize the data through sale of other financial and non-financial products.

The priority over the last couple of years has been customer acquisition and driving adoption of digital payments —not much attention has been paid to risk management and fraud control. It is reported that cyber-attacks caused financial damages of more than $500,000 to Indian companies in the last 12 months (Source: CISCO).

The last few years have seen entry of hundreds of new players in the payments space. A lot of these provide niche solutions. However, consumers demand ubiquity, and look for instruments that work across use cases, both online and offline. Hence, we expect that the space would see consolidation, and few large players would dominate.

If a descendant of Kumbhakarna was to go to sleep in 2016, and wake up only in 2020—it is quite likely that he would not be able to transact when he wakes up—such is the speed of evolution of payments in India. We hope you are not a modern day Kumbhakarna!