From smart cities and telecom to manufacturing and mobility, the concept is set to disrupt almost every sector

On 14 June, the National Institution for Transforming India issued a dire warning. Better known as NITI Aayog, the government think tank indicated that India is facing its “worst" water crisis in history even as it forecast that demand for potable water will outstrip supply by 2030 if adequate steps are not taken.

Along with other policy steps, technology may just about lend its bit to ease the water crisis. Consider smart meters that are capable of reading individual water consumption in real time and preventing wastage by detecting leaks and shutting off the water supply remotely. Using the internet of things (IoT) concept, which allows remote monitoring over the internet, smart meters can be used to analyse a water treatment system and control it from anywhere, anytime, water crops remotely, monitor the quality of tap water, detect the amount of leakage or waste thrown into the river and even monitor water level variations in reservoirs. Research firm IHS Markit predicts that in five years, more than 500 million smart water meter units would be sold globally. Besides, smart IoT-powered water and energy meters are a few examples of a smart city, which itself can benefit immensely from IoT.

In India, 1.9 billion devices are expected to be connected by 2020 from the current base of 60 million. Consequently, the India IoT market is expected to grow from $1.3 billion in 2016 to $9 billion by 2020 across sectors such as telecom, health, vehicles, homes, entire cities and manufacturing floors and computers, according to the IoT India Congress 2018—India’s largest Platform of Platforms for the Internet of Things.

Industries such as utilities, manufacturing, automotive and transportation and logistics are expected to see the highest adoption levels in India, whereas industries such as healthcare, retail and agriculture are also expected to make significant progress in IoT adoption. The government’s planned investment worth $1 billion for 100 smart cities over the next five years is expected to help in this context and be a key enabler for IoT adoption across these industries.

“The IoT market is at a turning point—projects are moving from proof of concept into commercial deployments," said Carrie MacGillivray, IDC’s group vice-president for internet of things and mobility. She adds that organisations are looking to extend their investment as they scale their projects, driving spending for the hardware, software, services and connectivity required to enable IoT solutions.

Big companies such as IBM, Cisco, Qualcomm and a host of Indian start-ups have begun investing in the IoT space. For instance, according to a 20 June news report, German tech major Bosch is looking to invest Rs1,700 crore in the next three years in India as it focuses on IoT and artificial intelligence. 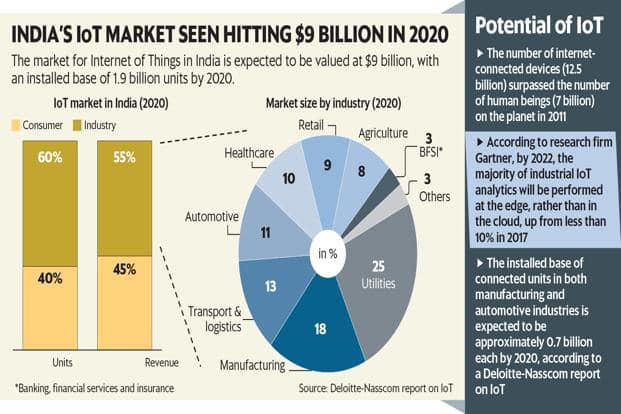 The German company is not alone. The Indian telecom industry is investing heavily in IoT. According to telecom consultant Kavita Gupta, all Indian telcos are focusing big time on IoT. It is, for instance, one of the fastest growing segments for Vodafone Enterprises in India. Tata Communications is investing about $100 million in IoT, with a focus on smart cities, utilities and people safety. Reliance Jio Infocomm has launched an NB-IoT (narrow-band IoT) network, with commercial network available in Mumbai, while Bharti Airtel Ltd is in talks with US telco Verizon for a broad partnership around IoT.

However, IoT adoption in healthcare is currently sparse and fragmented. “IoT could be a game changer in healthcare, with an integrated and interoperable ecosystem consisting of device manufactures and solution integrators; smart and personalised healthcare with IoT; value-based care, with location of care moving from hospital to home and type of care changing from ‘diagnose and treat’ to ‘prevent and manage’," says Ajit Ashok Shenvi, director, market solutions, big data and analytics, at Philips Innovation Campus India.