The new iOS brings enhancements, but the most defining aspect could perhaps be that the iPad doesn't feel like an oversized iPhone anymore

It has been in beta testing builds for months now, but the wait is finally over. If you haven’t been brave enough to use one of the public beta builds of iOS 11 on your iPhone or iPad thus far, the wait is now over. Apple released the iOS 11 update late last night, for all existing iPhone users (iPhone 5s and newer), the iPad (iPad Mini 2 and newer) and the latest generation of the iPod Touch. The new iPhone X, the iPhone 8 Plus and the iPhone 8 will arrive with iOS 11 preloaded out of the box.

Also read: Everything you need to know about Apple iOS 11 The control center has been completely redesigned, and is customizable too.

Unlike the move from iOS 9 to iOS 10, the shift to iOS 11 signifies a more vibrant visual change. For starters, the new font and the subtle changes in the colour scheme has a positive impact overall. It’ll disappoint you if you were expecting wholesale changes, but the finer details seem taken care of. The control center, which you access by swiping up from the bottom of the screen, has been completely redesigned, and is customizable too—this is a first. The App Store gets a new layout, the Music app gets some tweaks, the iMessage app now makes it easier to get to the third-party app and yet, iOS 11 retains the familiarity aspect from the predecessors.

What is a bit irritating though is iOS 11’s habit of automatically turning on Bluetooth sometimes when the iPhone or iPad is restarted—this despite Bluetooth being specifically turned off before the device itself was powered off. Most users may not realise this, and it’ll just drain the battery that extra bit while working in the background, and absolutely unnecessarily while at that.

While there are certain improvements with notifications, in terms of how you are able to deal with them (respond, remove, delete etc.) from the lock screen itself, many notifications from apps (such as WhatsApp) are still not bunched together. Which means you do get a rather long list showing up every single message you may have received on WhatsApp or Facebook Messenger, for instance.

The good thing is that screenshots (which we take regularly now, as a habit) now show up as a thumbnail on the bottom left of the screen—you simply tap on that to open a second screen which lets you edit with a fairly extensive set of pens and markers, and share. Once you are done, simply delete the screenshot from there itself, which will prevent your Photos library from getting cluttered with screenshots that may make no contextual sense to you a few weeks or months down the line.

The focus is on fluidity, and making iOS work faster than ever before. This should potentially be good news for anyone who will upgrade the older iPhones and iPads to run iOS 11. If you haven’t already downloaded the newest software, here are some of the interesting new things that you are missing out on. 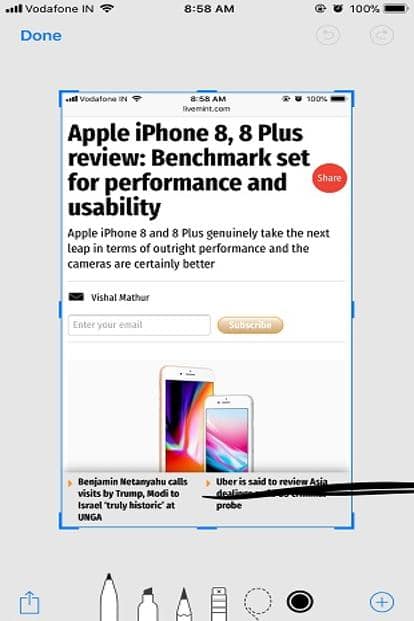 Screenshots now show up as a thumbnail on the bottom left of the screen.

If we actually consider iOS 11 as two OSes in one, it wouldn’t be entirely incorrect. What you see on the iPhone and the iPad is very different from what you will experience running iOS 11 on an iPad Pro—the 12.9, the 10.5 or the 9.7, whichever is your pick. Some of these exclusive features for the iPad Pro provides an even greater push to make these devices better placed for productivity requirements, and as alternatives for laptops and convertible PCs running Microsoft’s Windows 10 software.

For starters, the very familiar app dock will now have the space for many more app icons. The most used apps can be placed here for quicker access, instead of having to swipe across different pages. Over time, iOS 11 and its artificial intelligence capabilities will also learn which apps you use frequently, and add those icons to one side of the dock—though it is still too early to say how accurate that will be. This dock is now easily accessible irrespective of whatever app that is running on the display and without having to close it—simply swipe up from the bottom of the screen to have the dock pop up over the app running at that time.

There is the new split view which means two apps will be able to share the screen space—this will be particularly useful for multi-tasking on the larger iPad Pro 12.9 or the iPad Pro 10.5, which have much more screen real estate space that can come in handy. It is a breeze to simply drag any app to open in the split view mode with another app. Great if you have to keep the Mail app open while browsing the web or editing documents on the side.

In terms of productivity requirements, the addition of the simple drag and drop feature for content across apps is extremely useful—you can copy content from one app (let’s say, some text and images on any web page in the Safari web browser) and drag it across to another app (Mail, for instance, to share with a colleague). This could come in very handy when you really need it. 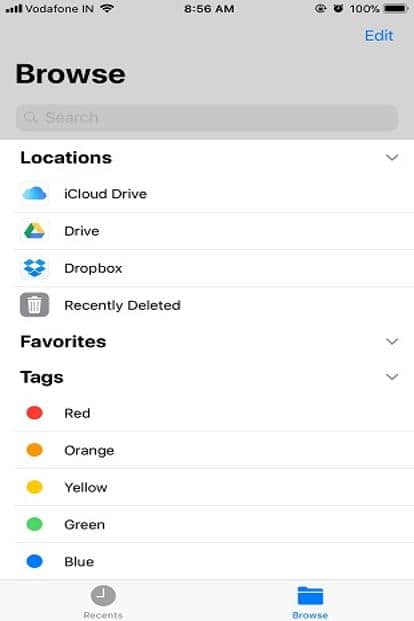 Apple has finally added a Files app, essentially a file and document manager, in iOS 11.

Filing it under ‘finally’

Sorely missed thus far, but that wrong has finally been corrected. Apple has finally added a Files app in iOS 11, something that perhaps makes the most sense on the iPad. This is essentially a file and document manager—just like you have the File Explorer in a Windows PC and Finder on a MacOS device. Cloud services such as Dropbox, Box and Google Drive are also integrated and show up as just any other folder on the iOS device within the Files app. The Files app has a simple layout, and also replicates the tags option seen in the Finder app in macOS on the iMac and MacBook.

The good old Notes app has been given some really powerful tools. It can now also be a document scanner, you can now start scribbling notes on the iPad Pro’s lock screen itself and any handwritten notes will be easier to search now as well.

Old apps are out, new are in

It should not come as a surprise, but iOS 11 effectively puts a stop to apps that are still clinging to the old 32-bit architecture and not optimized to use the 64-bit architecture. This surely isn’t a knee-jerk reaction, considering the fact that the iPhone and iPads have been running 64-bit processors since the iPhone 5s and the iPad Air, both of which arrived in the year 2013. Chances are there won’t be many apps left that are still not 64-bit compatible though, considering the fact that Apple has been telling developers to include support for 64-bit since late 2014. The shift to 64-bit allows the iOS 11 operating system to use more RAM, be more efficient and eschew the performance advantages. To see which, if any, of the apps that you use are still stuck in the 32-bit era, head to Settings -> General -> About -> Applications. 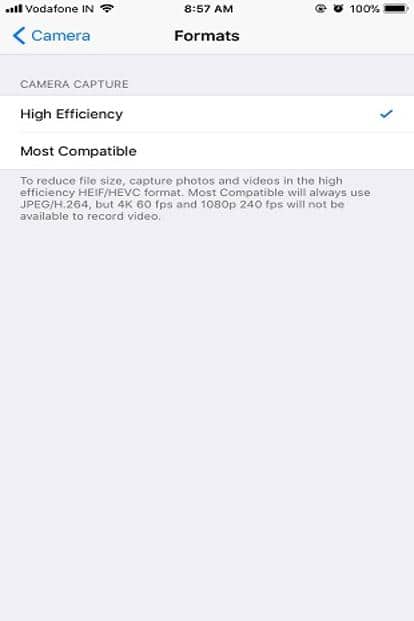 Apple has introduced the HEIF and HEVC image compression formats in iOS 11.

Apple has introduced the HEIF and HEVC image compression formats in iOS 11. However, by default, the camera app is still using the older compression formats, for the sake of compatibility with other apps that you may be using to edit, save and share the photos that you click. However, apps such as Dropbox have been updated to support the new formats, and the images are easily editable in apps such as Adobe Photoshop (free; optional in-app purchase) and Snapseed (Free). To change to the new format, head to Settings -> Camera -> Formats -> High Efficiency. Once you do this, it will also unlock the 4K at 60fps video recording capability on the new iPhone 8 Plus, for instance.

The Live photos can now be converted into GIF animated images, and you can also edit Live photos—these are a part of the deeper image editing capabilities that the iOS 11 Photos app will integrate. This includes the ability to set a lead image for every Live photo, cropping a sequence of images or letting them run in a constant loop are some of the editing options now available.

As it turns out, iOS 11 comes with a greatly improved Siri virtual assistant. Apart from the fact that it now sounds more human and has greater contextual capabilities, there are some new capabilities that make it very relevant. It will now translate between multiple languages—for starters, English to Mandarin, French, German, Italian and Spanish. In case you don’t like speaking to your phone, there is now the ‘Type to Siri’ option as well (Settings -> General -> Accessibility -> Enable Type to Siri).

Not exactly a part of the CarPlay option, as we would have otherwise expected, but iOS 11 has the new setting called “Do Not Disturb While Driving". You can enable this manually every time, or set it to automatically switch to this mode as soon as the iPhone pairs with the car’s infotainment system via Bluetooth. You can also send an automatic SMS reply to the favourite contacts, which will let them know that you are a safe driver and hence keeping your eyes on the road.

The answer is, for all compatible iPhones (iPhone 5s and newer) and iPads (iPad Mini 2 and newer), a definite yes. There are significant improvements across the board. What is perhaps the most defining aspect of iOS 11 could perhaps be the fact that while the same software works on iPhones and iPads, the latter doesn’t feel like an oversized iPhone anymore. Each gets its own unique set of features as well, while remaining largely the same to use—the lack of complexity, despite newer and more powerful capabilities, is something that we must credit Apple for—look at how Microsoft’s Windows has managed to complicate itself over the years, and you’ll get a context to what we are saying.