Game Review: AO Tennis is like a sprinkle in desert

The AO Tennis game is fun and challenging to play, but most of the top players are missing

Tennis game fans have something to rejoice as the Microsoft Xbox One, Sony PS4 and PC version of the AO Tennis game is finally available in the market. Developed and published by Melbourne based Big Ant Studios, known for Don Bradman Cricket Series, the AO Tennis is the official tennis game of the Australian Open. The delayed launch is a bit perplexing considering the fact that the Australian Open got over way back in January and the French Open is about to commence in a few days. However, the gameplay is not limited to the Australian Open. One can embark on full career which playing in all the major ATP, WTA and the all the Grand Slam Tournaments.

There is a casual mode where players can take on the AI, an online mode for multiplayer gaming and Competition where players can create their custom tournaments with AI opponents. The game offers plenty of flexibility in terms of customisation. Player can play full matches with up to 5 sets and 6 games in each set or play shorter games with reduced number of games and sets. However to play the game, even on PC, one needs to have a game controller.

In terms of realism, the game is a bit of a let-down compared to EA Sports’ Grand Slam Tennis 2 and Sega’s Virtua Tennis 4. Both games had richer graphics, more detailed stadiums and a bigger pool of star players. In the AO Tennis, Rafael Nadal was the only Grand Slam winning male player available in the game, while in the women’s circuit, Angelique Kerber and Samantha Stosur are the only two grand slam winners you can play with or against. However, characters based on the available players look a lot like their real-life counterparts. 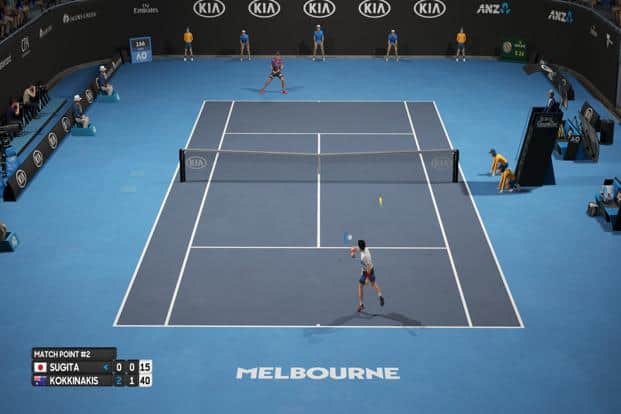 The gameplay is challenging and even at the rookie level you will have to put in that extra bit of effort. Game controls are smooth which makes playing the multiple shots a breeze. Career mode is the game’s main draw. One can play as one of the officially licensed players or create their own custom players. Users can even upload images of real-life tennis players and apply them on the face of their custom player. However the customisation is limited to player appearance, clothing and accessories. Player skills and attributes will automatically improve as the game progresses.

The AO Tennis is not in the same league as Grand Slam Tennis 2 or Virtua Tennis 4 in terms of visuals and player rooster, but the sheer fact that the last tennis game for console and PC was launched in 2012, makes it special. However, if you are not impressed, you can wait for Big Ben Interactive’s upcoming game, Tennis World Tour, which is expected to launch on 22 May 2018.