Samsung remained the market leader in Q3 2017, but Xiaomi was the fastest growing smartphone company with year-on-year growth of 102.6%

Samsung continues to be the global smartphone market leader for another quarter but Chinese company Xiaomi is the fastest growing company in the same period, according to IDC’s (International Data Corporation) Quarterly Mobile Phone Tracker for Q3 2017.

A total of 373.1 million smartphones were shipped worldwide in Q3 2017, marking an year-on-year increase of 2.7%, and a quarter-on-quarter increase of 7.4%, refuting concerns that the smartphone market is shrinking.

Samsung shipped 83.3 million units in Q3. This marks an increase of 9.5% from last year when it shipped 76.1 million units and held 20.9% of the market. It now controls 22.3% of the global market share, which is more than last year’s 20.9% but less than the previous quarter’s 23.3%. Samsung also reported an overall decline in quarter-on-quarter revenue. 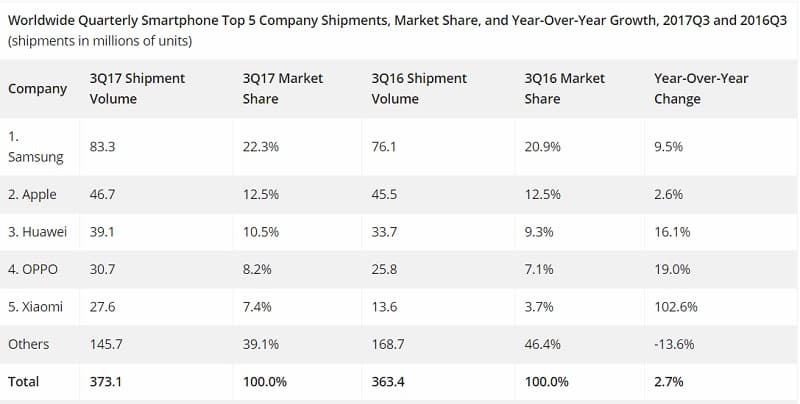 According to IDC, despite the slowdown in the Chinese smartphone market, Chinese companies are growing faster than others.

Oppo occupies the fourth position in the table, with market share of 8.2%. It shipped 30.7 million units in Q3 2017, registering an year-on-year growth of 19% from Q3 2016 when it shipped 25.8 million units and held 7.1% of the market. Oppo’s market share in Q2 107 was 8.1% and it shipped 27.8 million units. Its wide portfolio of smartphones across all price points and aggressive marketing tactics has worked for them.

“Premium flagships will capture all the hype while driving up the average selling price in Q4 2017, we still believe a clear majority of shipments will come from more affordable models across many markets," said Anthony Scarsella, research manager with IDC.

IDC also pointed out that due to higher price of flagships, many consumers are likely to wait and watch until the prices come down after the holidays or will go for more affordable options.