Clean air is not a luxury

The best air purifiers you can buy for your home

Outdoor pollution may get more headlines but indoor air pollution can be an even bigger problem. Indoor pollution—caused by combustion sources such as gas, coal and wood, outdoor pollutants, smoking, and household cleaning products—has been linked to respiratory disease, stroke and cancer.

Efficient air purifiers for the home, then, can no longer be considered an indulgence. We look at some of the best options.

What to look for: compact design

The Eureka Forbes Dr Aeroguard SCPR 300 has the advantage of a space-saving tower design and cleans the room air quickly. But it is hard to ignore the noisy fan—so while it would work well in a study room, for instance, you may not want to use it in a bedroom at night. The Atlanta Healthcare Beta 350 Viral Guard has high-quality filters and a UV light that can eliminate any stubborn virus that may escape the multiple filter layers. The Honeywell Air Touch A5 takes advantage of its HiSiv filter technology to show off some fantastic performance. It also has a topple-resistant design, which could be an additional advantage when there is a child around. It would be a close call between the Beta 350 Viral Guard and the Air Touch A5. 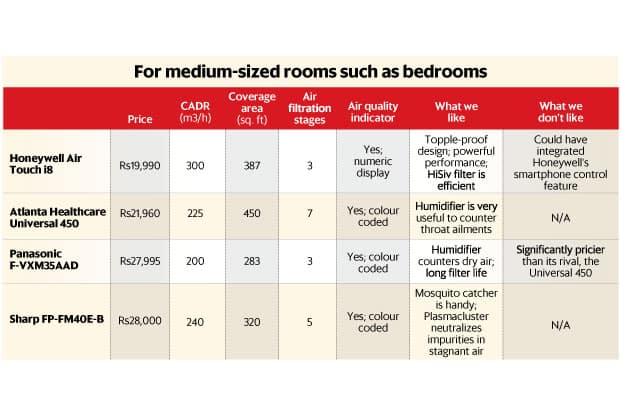 What to look for: silent operation

As it turns out, all these options are as silent as church mice. The Atlanta Healthcare Universal 450 and Panasonic F-VXM35AAD have refillable water tanks that maintain moisture in the air—important if you suffer from dry throat issues. Panasonic’s F-VXM35AAD is comparatively expensive, but its three-year filter life makes up for this. The Sharp FP-FM40E-B is the only purifier to have a mosquito-catcher feature which uses UV lights (these can be switched off) beneath the rear panel. Mosquitoes get pulled in by the air flow, and a sticky pad attachment is waiting for them. Sharp’s Plasmacluster feature also seeks out airborne particles from the static air behind furniture. The Honeywell Air Touch i8’s pre-filter is extremely efficient in capturing dust, which means that the high-efficiency particulate arrestance (HEPA) filter lasts longer. All four run neck and neck in terms of performance, but each has features that set it apart. It is, however, hard to ignore that the Honeywell Air Touch i8 costs much less and has the highest clean air delivery rate (CADR). 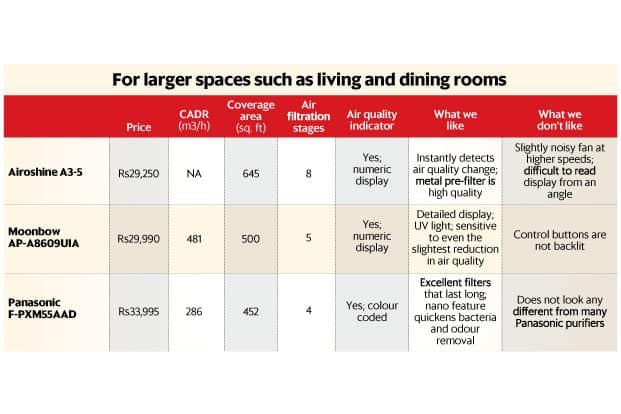 What to look for: large coverage area cleaning capacity

If you have a large hall combining the living and dining areas, with air from the kitchen also streaming through during cooking, you will need a purifier with brute cleaning power. The Airoshine A3-5 has a metal pre-filter, which is rare (the Atlanta Healthcare Purezone 651 also has a metal pre-filter), and not only enhances the speed of air purification, but also keeps the HEPA filter cleaner. Panasonic claims the PXM55AAD’s filters will last 10 years, which, if you factor in the yearly replacement costs with rival purifiers, translates to more savings the longer you use it. The surprise pack is the Moonbow AP-A8609UIA—inside it is a very large and powerful motor. All three purifiers have the control panel on the top, but the PXM55AAD does not have a numeric air quality display. The AP-A8609UIA is the most expensive of the lot, but the sheer cleaning power puts it in direct competition with the equally competent Airoshine A3-5. 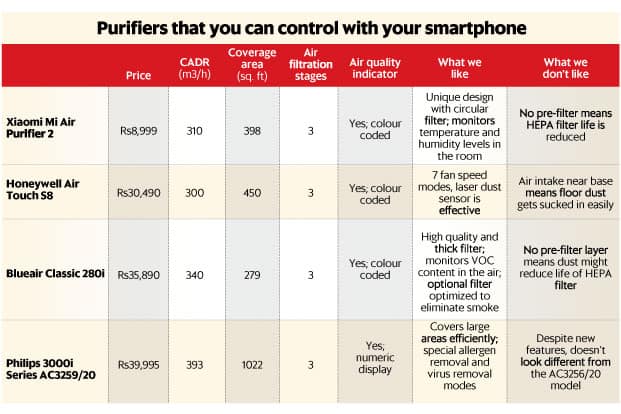 These purifiers have built-in Wi-Fi modules that can be connected to your home Wi-Fi. So you’ll be able to monitor the room air quality statistics, change settings and control modes from your phone. Xiaomi’s Mi Home app, and Honeywell’s Hplus app, both free for Android and iOS, monitor the room’s air quality and the purifier’s filter life. Philips, which does not have an app of its own, plugs the 3000i Series into the third-party Air Matters real-time air quality monitoring app (free; Android and iOS), to remotely change modes of operation. It even shows the filter life in terms of hours remaining. Blueair has perhaps the most detailed app—Blueair Friend (free for Android and iOS) for the Classic series as well as the Sense and Pro purifiers. It gives details about the levels of carbon dioxide and volatile organic compounds (VOCs), etc. in the room, based on the data collected from the purifier’s sensors. It would be a close call between the Philips 3000i Series, which can cover larger areas than any rival, and the Blueair Classic 280i, which has the most detailed app—though the latter’s all-in-one filter would need replacement sooner (in around six months) than the former’s (in around 12 months).