Thanks for Visiting Mint
You seem to have an Ad Blocker on. Please turn it off in order to continue, or whitelist Mint
HOW TO TURN OFF AD BLOCKER
OR
REFRESH IF YOU ALREADY TURNED OFF THE AD BLOCKER
Home >Technology >Apps >Facebook deploys more measures to restrict data, but you might still feel confused

Facebook also confirms that the consolidated app controls will roll out for all users, and will be available at the top of the news feed when you log in to the app

Ever since the Cambridge Analytica scandal became public knowledge, forcing CEO Mark Zuckerberg and COO Sheryl Sandberg to apologize, Facebook has been making change after change to the way it allows third party apps to access data. In yet another announcement, today, the social media network is tweaking what it calls ‘data practices’ as well information third party apps on Facebook can access.

For starters, Facebook is straightaway addressing the debate about why and how the Messenger and Messenger Lite apps had access to the call and message logs of Android phone users. While Facebook continues to insist that this remains an ‘opt-in’ feature, the fact remains that the app’s set-up process didn’t really clarify that at first glance. 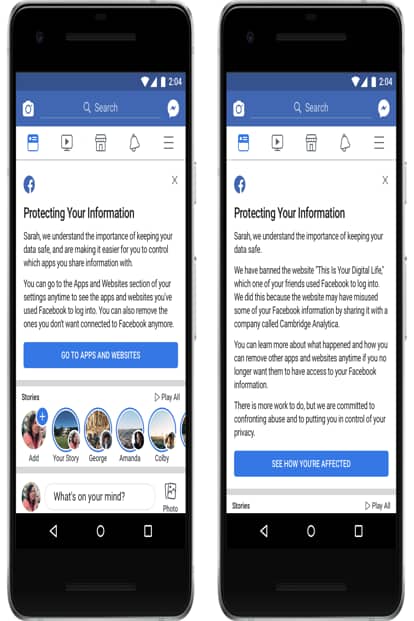 Interestingly, Facebook will still retain some of this data, as mentioned in the official statement. "We’ve reviewed this feature to confirm that Facebook does not collect the content of messages — and will delete all logs older than one year," said Mike Schroepfer, chief technology officer, Facebook. The statement also said that the Messenger apps will now “only upload to our servers the information needed to offer this feature — not broader data such as the time of calls." Now that still remains confusing.

Also read: Facebook may be right when it says Android users didn’t say no to call and message log collection

Facebook has made changes to how apps could plug in to the Facebook calendar, wherein users could grant any app the permission to get information about events they host or attend. This included private events as well. However, this meant that the Facebook Events data would also include information about who else attended the event as well as any posts that you share on the event’s wall. “Starting today, apps using the API will no longer be able to access the guest list or posts on the event wall. And in the future, only apps we approve that agree to strict requirements will be allowed to use the Events API," said Schroepfer.

The social network is also tweaking the login process for third party apps. Facebook will now approve all apps, at its own end, that require access to any user data such as posts, check-ins and more. “We will also no longer allow apps to ask for access to personal information such as religious or political views, relationship status and details, custom friends lists, education and work history, fitness activity, book reading activity, music listening activity, news reading, video watch activity, and games activity," said Facebook in an official statement.

This means that the next time you use the Facebook credentials to sign up for or log in on an app, what you will not see is the screen that wants you to accept the terms and conditions allowing the app to access some of your Facebook data such as posts, photos, age etc.

Facebook will also restrict apps from accessing user posts on any pages on the social media platform. The social media network also confirms that the consolidated app controls will roll out for all users starting today. This will be available at the top of the news feed when you log in to the Facebook app.

The other big change that Facebook will implement is with the search feature. Till now, you could search for someone on Facebook using their name, email address or even their phone number (assuming they had linked it to the Facebook account—and many had, unknowingly or knowingly). This meant that anyone with malicious intent, such as someone who has a phone number but not a name, could easily scrape data. Facebook said they will disable this feature now.