New Delhi: More and more social media users in the 17-25 age group are approaching plastic surgeons to wear a filtered look of their own selves. Doctors warn that the disturbing trend, dubbed Snapchat dysmorphia, has also caught the fancy of the Indian youth, who are seeking surgery to get fuller lips, bigger eyes, or a thinner nose, based on their favourite social media filters.

In an article published on 2 August in JAMA Facial Plastic Surgery, a bimonthly medical journal published by the American Medical Association, researchers from Boston University School of Medicine’s department of dermatology, said that easily accessible photo edits such as those in Snapchat and Facetune are “altering people’s perception of beauty worldwide" and has the potential to trigger body dysmorphic disorder, a serious mental illness classified on the obsessive-compulsive spectrum.

“This is an alarming trend because those filtered selfies often present an unattainable look and are blurring the line of reality and fantasy for these patients," the article states.

As filters and edits become the norm, altering people’s perception of beauty, experts in India say the trend is trickling down to the Indian youth. “As more and more people are exposed to Instagram and Snapchat, we are seeing an increase in body shaming, the constant comparison leading to eating disorders and dysmorphic thoughts among the youth," said Dr Rajetha Damisetty, dermatologist and former convener, Task Force on Topical Steroid Abuse. 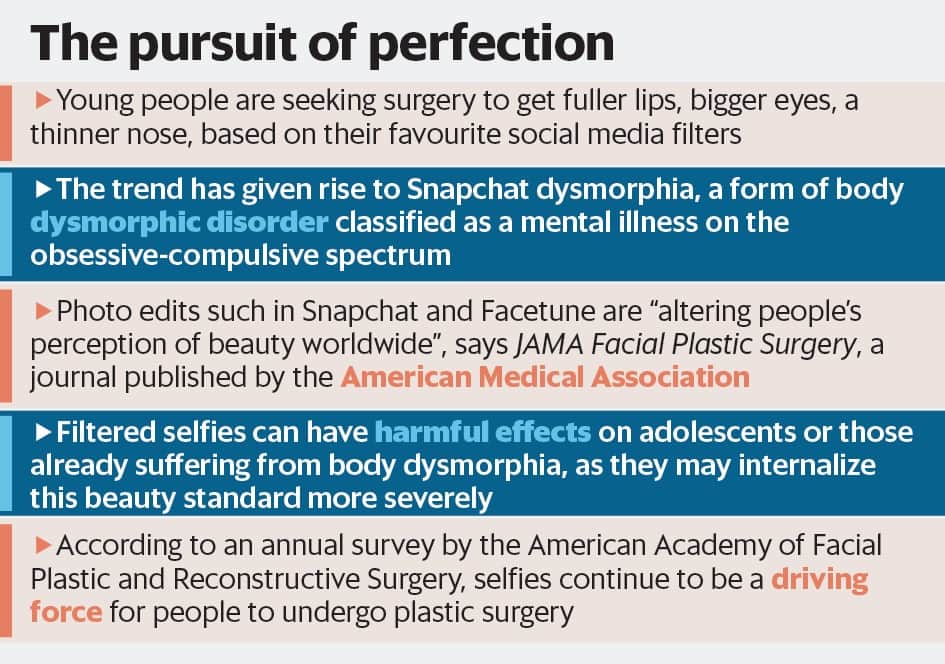 With the availability of editing options, beauty standards once seemingly unachievable have become accessible to everyone now, the JAMA article says. “It is not just celebrities propagating beauty standards, it is a classmate, a co-worker, or a friend. The pervasiveness of these filtered images can take a toll on one’s self esteem, make one feel inadequate for not looking a certain way in the real world, and may even act as a trigger and lead to body dysmorphic disorder," adds the article.

Jaishree Sharad, a Mumbai-based celebrity cosmetic dermatologist, said bringing photos of celebrities is passé. Instead, people are bringing in pictures of their edited selfies for getting “perfect" images. “The trend is more among 17-25 year olds. It is getting big in India. People are taking selfies and they would find a lot of flaws in themselves. Even a minuscule thing would bother them and they would want to go to any extent to get rid of it. This is taking a toll on people."

BDD is an excessive preoccupation with a perceived flaw in appearance, classified on the obsessive-compulsive spectrum.

“The disorder is more than an insecurity or a lack of confidence. Those with BDD often go to great lengths to hide their imperfections, engage in repetitive behaviours like skin picking or grooming, and may visit dermatologists or plastic surgeons frequently, hoping to change their appearance," the article further says.

During their recent study, experts analysed the effect of edited selfies on body dissatisfaction among adolescent girls and found that those who manipulated their photos more reported a higher level of concern with their bodies and an overestimation of body shape and weight. The study also suggested that those with a dysmorphic body image may seek out social media as a means of validating their attractiveness. Finally, those with a higher level of engagement on social media—including those actively trying to present a specific image of oneself or analysing and commenting on others’ photos—may have a higher level of body dissatisfaction. The desire for cosmetic surgery is an important component of BDD.