New Delhi: Chinese mobile phone brand Xiaomi, which commands a dominating 30% market share in the Indian smartphone market, has captured the top slot with just four models of smartphones. According to a recent market report by IDC, Xiaomi has maintained its leadership position with its highest shipments in a single quarter (Q1 of 2018-19).

Redmi 5A: Meant for budget smartphone buyers, Redmi 5A is priced around ₹ 6,000. Amongst the cheapest of all Redmi smartphones, this one comes with 2 GB RAM, 16 GB hard disk and 12MP primary camera.

Together, these four handsets accounted for 26% of overall smartphone shipments in the first quarter of the current financial year. Xiaomi’s shipments grew 10% sequentially and more than two-fold annually, according to the IDC report. 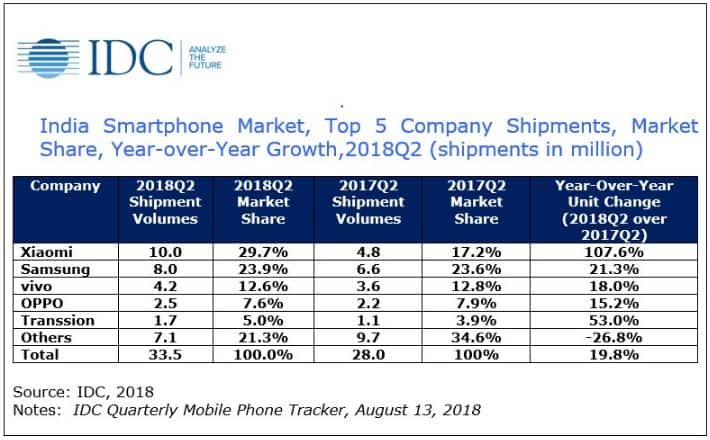 Vivo: Led by a marketing campaign featuring superstar Amir Khan and a title sponsorship in the IPL cricket tournament, Vivo reclaimed its third position in the market. Its most successful models include the Y71, V9 and Y83.

Huawei: Upasana Joshi, Associate Research Manager, Client Devices, IDC India, said Huawei should be seen as a serious long-term player in India with all the ingredients to challenge Xiaomi and Samsung.

The report shows that smartphone companies shipped a total of 33.5 million units to India during the second quarter of 2018, resulting in healthy 20% year-over-year growth. In the e-commerce space, Xiaomi leads the smartphone market as 56% of all shipments were dominated by Redmi phones.