Google Pixel 3 XL: The smartest Android phone you can purchase

New Delhi: With the third instalment of the Pixel, Google is enhancing its efforts to build an artificial intelligence (AI)-powered device.

Performance: To begin with, Pixel 3 has the hardware to support all AI-enabled activities. Google’s Visual Core processor is enhanced to take care of even more of the phone’s smart features. The Pixel 3 XL is a fast smartphone and though it has only 4GB of RAM, it rarely stutters.

Camera: This phone’s value proposition lies in its camera. The Pixel 3 camera isn’t better than that of the Pixel 2 in terms of image quality, but it’s certainly smarter. Google has introduced the Top Shot feature, which has the phone take a burst of photos in different exposures, combining data from each of them to form one full resolution photo.

ALSO READ: Google Pixel 3, 3 XL coming to India, but not everything else

The Super-Res Zoom feature also takes a burst of photos when you zoom in. This doesn’t outperform the iPhone XS’ optical zoom, but it is noticeably better than the digital zoom on other phones. The Pixel 3 XL’s camera is certainly the best a smartphone can offer today. 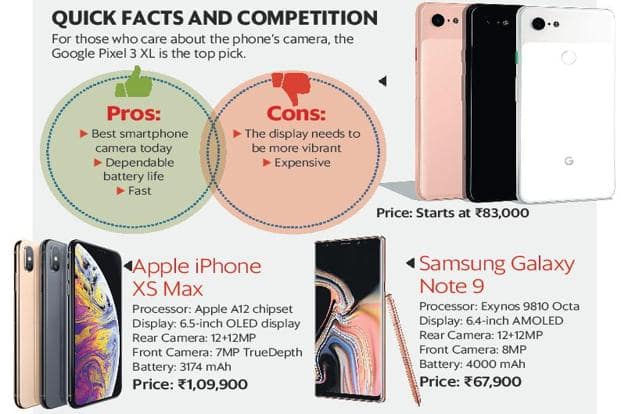 Display: Perhaps the only thing that puts a Pixel behind competing flagships is its display. While it’s premium and vibrant, it feels slightly undersaturated compared to an iPhone XS or Galaxy Note 9.

Verdict: Starting at ₹ 83,000, the Pixel 3 XL is not a cheap smartphone. However, if you want the best of Android, this is certainly it. It also has the best camera any smartphone can offer.