Home >Technology >Apps >Coolpad Cool Play 6 review: An Android One match for the Xiaomi Mi A1

Coolpad Cool Play 6 review: An Android One match for the Xiaomi Mi A1

Coolpad is taking the challenge to its Chinese counterparts with the new Cool Play 6. Priced at Rs14,999, the new smartphone comes with dual cameras, a big screen and 6GB RAM. It is competing against the likes of Xiaomi Mi A1, which is also selling at the same price. 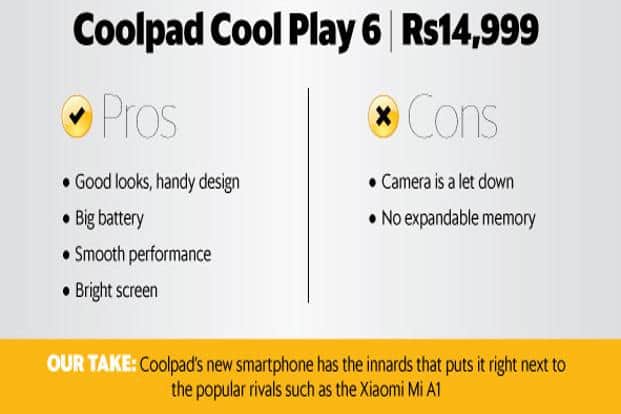 The Cool Play 6 is a well-dressed smartphone with a metal chassis wrapping around the back and side. It’s designed well and that reflects when you are holding the phone. The edges are smooth and the back panel has been given a slight curve so the smartphone would snuggle comfortably into the palm. The fingerprint sensor is placed on the back right under the dual camera module. It falls in the range of the pointing finger and is quite accurate to use. The lower side panel includes the USB Type-C connector and the speaker.

It comes in subdued gold and black colour options. Some of the issues we have with the design is the black bar around the display. It becomes more prominent in the gold variant. Also the camera module sticks out form the body.

The Coolpad smartphone weighs 174g and is 8.5mm thick, which is slightly more than the Xiaomi Mi A1’s 165g and 7.3mm thickness.

The Mi A1 also has a metal body but is available in more colours—rose gold, black and gold. The volume and power button are made of metal too. They are easily accessible but feel a bit stiff when pressed. The 5.5-inch screen has a resolution of 1,920x1,080p, which is impressive but not rare at this price point any more. The Mi A1 also has a 5.5-inch screen with resolution of 1,920x1,080p, but it doesn’t look as vivid as the Cool Play 6’s screen which makes the latter ideal for watching movies and gaming. Text in ebooks and webpages look crisp, while looking at the screen from wide angles doesn’t affect visibility.

Cool Play 6 offers a range of screen settings, allowing users to switch from the natural to vivid colour mode and from cool to the more soothing warm tone. The smartphone runs Android 7.1 with Coolpad’s proprietary Cool UI on top. It is a typical Custom UI with no app drawer but doesn’t look as polished as the Emotion UI nor does it offer as many features as the MIUI. We like the icons it assigns to every option in the Settings page. This makes finding what you are looking for a lot easier.

You can change the themes from the options on the device only as there is no theme store. It has a dual app mode which allows users to keep two versions of the same app on the phone.

The Mi A1 runs Android 7.1 with the purest version of Android UI on the lines of the Pixel smartphones.

This is an Android One smartphone, which means it will get all Android updates for two years, with Android 8.0 expected by the end of the year.

For an affordable smartphone, the Cool Play 6 does well in terms of configuration and performance. It is powered by Qualcomm’s Snapdragon 653 octa-core processor with 6GB RAM. While the processor has been seen in the segment before, we haven’t seen any smartphone with 6GB RAM under Rs20,000 until now. This makes it one of the most powerful budget smartphones around. Multi-tasking on it is smooth, while games such as Shadow Fight 3 and PES 2018 played out without any hiccups or heating issues. There is 64GB internal storage, but there is no microSD slot, so you can’t add more, unlike the Mi A1 which offers a microSD card in addition to the 64GB internal storage. The Mi A1 ruins on Qualcomm Snapdragon 625 octa-core processor, which is an advanced version of the Snapdragon 653 and slightly more powerful. It is also based on a 14nanometer architecture which is more power efficient than the 28nanometer architecture of the latter.

This is one of the reasons, why the Mi A1’s battery backup is impressive despite the (3,080mAh) size. The Cool Play’s 4,060mAh battery lasts a day and half at most in similar scenario. This is one of the few smartphones in the segment which packs in dual cameras. The two 13-megapixel cameras include an RGB sensor and a monochrome sensor. One can shoot black and white photos and videos too. It also comes in handy for capturing shots with bokeh effect. This works out very effectively but works best for portrait and close-up shots. Landscape shots do not look very clear, even on a sunny day. The overall image didn’t look very crisp either. The Mi A1 with its two 12-megapixel cameras was able to reproduce more detail and colours. It also offers 2x optical zoom. In low light, the MI A1 was able to produce slightly more detail.

The 8-megapixel selfie camera can capture good-looking selfies even in indoor conditions with limited light.

The Cool Play 6 is one of the most powerful smartphones in the affordable segment and can handle most tasks and games without breaking sweat. It looks good, offers a big and bright screen and has a dependable battery. The reasons to go for the Mi A1 include the slightly superior camera, pure Android experience and the assurance of Google updates.