How the govt can deal with fake news on WhatsApp

As WhatsApp does not have a data server in India, it is not bound by the laws of the country

What should a government do when fake online messages and rumours incite mobs to lynch people? On 4 July, the government responded by conveying its “deep disapproval" to WhatsApp and urged it to “take accountability and responsibility" for the spread of “fake and provocative messages" through its platform.

While WhatsApp issued a response, saying “we don’t want our services used to spread harmful misinformation..", it added that, “WhatsApp cares deeply about people’s safety and their ability to freely communicate". It’s this part that makes the government’s resolve to pressure WhatsApp, which has 200 million monthly active users in the country, into submission. It’s a double-edged sword, and is easier said than implemented.

The dilemma is similar to the ban Blackberry faced in 2010 over its BBM messaging service. It was forced to dilute its encryption to allow the government to read BBM messages, ostensibly in a bid to counter terrorist propaganda and other rumours. WhatsApp, on its part, uses the Signal Protocol, designed by Open Whisper Systems, as the basis for its encryption that is designed to prevent third parties and WhatsApp itself from accessing messages and calls.

To counter this, say experts, the government can strengthen the Information Technology (IT) Act, 2008, to ensure intermediaries comply with the law and remove “offensive" content. However, if the government does so, there could be a backlash over monitoring of private messages and uproar over social media networks sharing private data with governments. 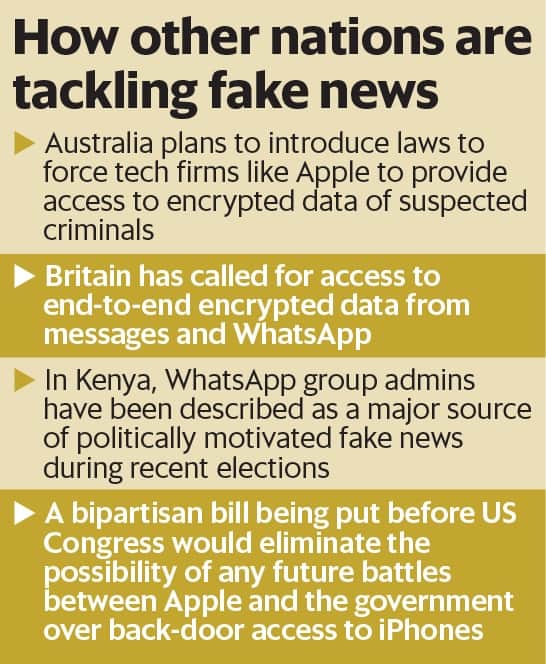 From a legal angle, too, WhatsApp does not have a data server in India, so it is not bound by the laws of the country. “WhatsApp is choosing not to comply with Indian laws because it is governed by US laws. The government, on its part, can without approaching Parliament, come up with a rule under Section 87 of the IT Act, 2008, to regulate intermediaries," says Pavan Duggal, Supreme Court advocate and president, Cyberlaws.net.

According to Duggal, WhatsApp needs to remove offensive content the moment it’s notified. “Besides enforcing Section 79 read with Section 85 (both deal with offensive posts and regulating intermediaries), India needs a Fake News Law too," he suggests. Duggal adds that India needs to “determine punishments" for non-enforcement of such laws and also “make cyberlaw part of a school’s curriculum" to create more awareness.

On the other hand, Sunil Abraham, founder of think tank Centre for Internet and Society (CIS), believes that WhatsApp is facing the “technological moral panic".

“Whenever there is a new technology, people tend to blame it for misuse. Even if you ban WhatsApp, users will move to other platforms, which the government will find even more difficult to control," he explains. He suggests that WhatsApp have a “single click fact-checking feature". This will allow a fact checker to instantly provide a user a “low-truth or high-truth score".