Alibaba's UC Browser is the most popular browser in India, Lenovo's SHAREit the top fire-sharing app and Cleanmaster the best mobile data manager

Bengaluru: Chinese utility and content apps such as UC Browser, Xender, SHAREit, Cleanmaster and UC News have become among the most popular apps in India, overtaking many of their Indian and American rivals with ease.

UC Browser, owned by Chinese e-commerce firm Alibaba Group Holding Ltd, is the most popular browser in India. Another Alibaba-owned app, UC News, which aggregates entertainment, cricket and other content, is among the most popular news apps while NewsDog, owned by Hacker Interstellar Inc., is spending heavily to catch up with local rivals such as Dailyhunt, according to data from KalaGato, a research firm. 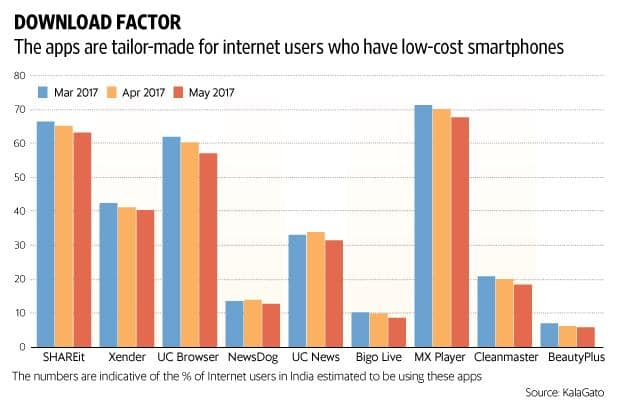 SHAREit, owned by Lenovo Group Ltd, is the most widely used file-sharing app and smaller rival Xender, too, isn’t far behind, the data shows. Cleanmaster, owned by China’s Cheetah Mobile, is popular with users who constantly run out of storage space on their phones while Meitu Inc.-owned photo-editing app BeautyPlus competes with Facebook Inc.’s Instagram app.

If you’re living in Mumbai, Delhi or Bengaluru, you may not have heard of these Chinese apps but they enjoy massive popularity among Indians in smaller towns and cities. Tailor-made for internet users who have low-cost smartphones, these apps, along with a host of others such as video player MX Player and Bigo Live, offer an insight into how millions of Indians in smaller cities and towns are using the internet. (MXPlayer and Bigo Live, which offers edgy video content uploaded by users, are based out of the US and Singapore, respectively)

“China is five years ahead of India in terms of number of mobile internet users, mobile internet speeds and having a much richer app ecosystem," said Prayank Swaroop, principal at Accel Partners, a venture capital firm. “So Chinese companies are able to experiment with new app ideas and learn about consumer behaviour faster in their country, and then bring them to India. They’ve seen it before, they build the right product experience and are backed by massive capital so Indian start-ups have to be very innovative to compete against this combination. Building something uniquely Indian is the key."

The success of these apps is, in turn, attracting other Chinese app makers to India as well as prompting Indian start-ups and investors to seek products for users outside the large cities. Last October, vernacular news content aggregator Dailyhunt (Verse Innovation Pvt. Ltd) raised $25 million in a funding round led by ByteDance, a Beijing-based content service provider. Other Chinese investors as well as venture capital firms are scouting for start-ups offering local language content and video content providers.

“There’s a lot of consumer, and hence investor, interest in video content. It needs to be local and relatable and it won’t necessarily be consumed on YouTube (the video player owned by Google Inc.). That means there’s potentially a lot of space for India-specific content and entertainment apps," said Karan Mohla, executive director at IDG Ventures India Advisors, a venture capital firm. “Then there’s the community-building aspect. Facebook won’t be used by everyone so there is demand for community and content-sharing platforms made for users in the tier III cities and lower."

While the Chinese apps referred to above have done well in attracting a large user base, they don’t make money off them in most cases. That’s a problem with the Indian digital business: most of the online advertising spending is still being grabbed by Google, followed by Facebook (a distant second). The likes of Alibaba are investing heavily to accumulate large internet audiences in the hope that they will attract significant ad spending in future. That hope is shared by start-up investors.

“Right now, it’s mostly about getting to a large user base. We believe that if you get to, say, 50 million active monthly users, then there will be attractive monetization opportunities," said Akshay Bhushan, associate partner at Lightspeed India Partners. “But getting to that scale is a huge challenge. And while there’s a lot of demand for vernacular content, we aren’t seeing many new start-ups that are trying to address this."

None of the companies responded to emails seeking comment.