Why Google wants to set up a data centre in India

Google, which has been running its cloud infrastructure for over a decade, is looking to externalize it and make it available for enterprises

Mumbai: In a move aimed at taking a bigger bite of the country’s growing appetite for cloud computing services, Alphabet Inc.’s Google plans to set up a data centre in India by December end.

While Google officials did not reveal the investment or the size of its Mumbai data centre, it is part of the $30 billion the company has spent on cloud infrastructure that chairman Eric Schmidt alluded to in his speech at a March developer conference in San Francisco. “Part of that $30 billion investment has gone into building our network (which includes undersea cables), which is a differentiator for Google Cloud," Rick Harshman, managing director of Google Cloud for Asia Pacific, Google Asia Pacific Pte. Ltd, said in a recent interview in Mumbai. He added that Google “owns and operate that network".

Google, according to Harshman, has been running its cloud infrastructure for over a decade. “All our consumer services are in the cloud. So it was an opportunity for us to externalize it and provide services to companies," he said.

Research firm Gartner estimates the public cloud services market in India to grow 43% in 2017 to total $1.9 billion in revenue.

Cloud computing refers to the model in which companies pay for information technology (IT) resources such as servers, storage and software on a pay-per-use basis rather than upfront payment. The resources are made available over a network, primarily the internet, via cloud data centres by companies such as Amazon Web Services Inc. (AWS), Microsoft Corp., International Business Machines Corp. (IBM), Google Inc., and Oracle Corp. 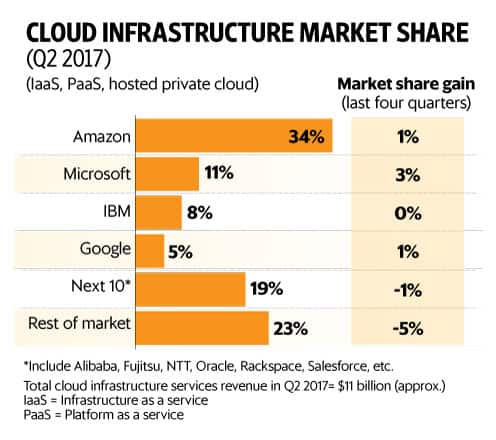 “A number of enterprises in India use G Suite and now they are beginning to use other aspects of Google Cloud," according to Harshman.

Chief information officers, or CIOs, in India have welcomed the announcement by Google.

“While Amazon and Microsoft are way ahead, Google is one of the most respected organizations in the world and a benchmark for people in IT. Setting up a data centre at this point is one of the best moves from Google," believes Vijay Sethi, chief information officer and head of corporate social responsibility, Hero MotoCorp. Ltd, an auto firm which uses G Suite.

To be sure, companies also use services of other cloud services providers. Consider the case of Purplle.com—an e-commerce site for beauty products owned by Manash Lifestyle Pvt. Ltd. “We are hosted by three providers: E2E Networks, AWS and Google," says Suyash Katyayani, the company’s chief technology officer. The company uses E2E Networks mainly for what Katyayani calls “defined scale infrastructure needs—our database and web servers where we can anticipate traffic well". The other two, AWS and Google, are used for managed services, which allow Manash Lifestyle to tackle “upswings or downswings in traffic easily and cost-effectively".

Katyayani believes there is “no clear winner" between AWS and Google.

“There are certain things that Amazon does better and certain things where Google is better. We are trying to use their respective strengths in those areas," he explained. In terms of pricing, however, he feels Google is “definitely more aggressive right now", as it has to “create a space" for itself.

The space, as far as Google is considered, already exists in the form of hundreds of millions of Indian consumers who use Google Search, Gmail, YouTube and other products from Google’s repertoire. But can the company leverage it for enterprise customers, who may have a different mindset or requirements?

“CEOs understand that they have been partnering with Google on the ad side of business for years. But you are right, a lot of the time the CIO does not equate that with Google," acknowledged Harshman. He pointed out that the company has been working on it and making investments in three key areas specific to India. “One, we have been hiring people across sales, customer engineering and professional services, which is critical for enterprises. The second area is around local channel (distributors). We have been working with a number of local and global system integrators here—ranging from companies like Searce, Team Computers and Cloud Cover to partners like Wipro, Infosys and Deloitte—in addition to independent software vendors and enterprise software companies like SAP, Intuit, Nutanix and Pivotal," Harshman said.

While competition in the data centre market is intensifying—Microsoft and IBM have already established data centres in India and Oracle plans to do it soon—analysts believe that tailored services and advanced capabilities will define the choices for CIOs. “If you look at AWS and Microsoft, both have started focusing a lot on data analytics and AI (artificial intelligence). For a CIO to choose one cloud provider over another, what will matter is how they are able to tailor the offerings to end users," explained Sunil Chauhan, assistant manager at Aranca, a research and advisory firm.

“Google will have a challenge initially, considering the head start AWS has in the Indian market," Chauhan believes, but concluded that “considering the quality of services that consumers have come to value Google for—if Google can replicate similar services for enterprises—they might well differentiate themselves and make a dent".

Subscribe to Mint Newsletters
* Enter a valid email
* Thank you for subscribing to our newsletter.
Topics
Enterprise Tech Mint India Wire​ Tech@work
Close
Recommended For You
Feedback
Select your Category
Your Message
No Network
Server Issue
Internet Not Available