Sharp FP-FM40E could be an ideal air purifier to tackle the issues of indoor air pollution and mosquitoes, inside your home

Sharp has taken a great home air purifier, the FP-F40E (Rs25,000; Amazon.in), and used it as a foundation to build the FP-FM40E on. The new FP-FM40E is priced at Rs30,000 (www.mysharp.in) and does one thing more apart from doing the air cleaning bit—it can also lure in mosquitoes and annoying flying bugs, and trap them. It is often said that one shouldn’t try to fix something that is already great, but Sharp has improved an already fantastic air purifier for homes, with a feature that no rivals offer at present.

Design: Slick, with a new addition

The stylish design is largely replicated from the FP-F40E, with the same curvaceous look, the control panel on the top with the clean air vent and the dirty air intake vent at the rear. But there is one critical change—the FP-FM40E is available in a rather attractive black colour. However, that isn’t just a function of good looks, but has utility too. The control panel at the top is neatly laid out. There are two indicators on the front, for air quality and dust levels.

Performance: Seeks out impurities with aplomb

The Sharp FP-FM40E takes in air from the large vent at the back—for optimal performance, do not place it too close to a wall or a piece of furniture. The thick and high-quality HEPA and carbon filter should last up to 24 months depending on factors such as how dusty your home is, and the replacement filter costs around Rs6,000. The purifier has a rated Clean Air Delivery Rate (CADR) of 240 cubic metres per hour (m3/hour) is good enough for room sizes around 320 square feet (around 30 sq.m). In a 32.5 sq.m living room, this improved the air from an unhealthy 121μg/m3 of particulate matter (PM) to a clean 24μg/m3 in 30 minutes. The purifier also has a Haze Mode, which when turned on, speeds up to eliminate smoke that may have entered the room. 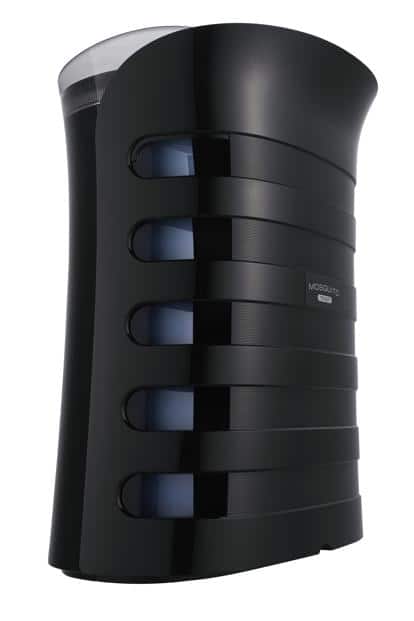 Sharp FP-FM40E ticks off all the boxes on the performance checklist.

The Sharp FP-FM40E is the only purifier than can also trap mosquitoes and other flying insects. At the back of the purifier is a trap attachment (this can be removed and cleaned) and UV lights (these can be switched off). The attempt is to attract mosquitoes towards what looks like a safe hiding corner. Once near, they get pulled in by the air flow, and there is a replaceable sticky pad attachment waiting for them. Not to be scoffed at, this feature really works well. Not that we have a mosquito problem at home, but this did catch whatever few that did end up sneaking indoors somehow. You can dust off the sticky pad, and depending on how many mosquitoes are trapped on it, you will need to remove one pad and attach another. Sharp bundles a few sticky pads with the purifier, but once those are used up, the replacement pads will cost around Rs1,000.

There is no doubt that the Sharp FP-FM40E ticks off all the boxes on the performance checklist, and the mosquito catcher feature is useful if you are regularly troubled by these flying irritants at home. This purifier’s excellent filter quality cannot be ignored. The only potential shortcoming with the Sharp FP-FM40E is that it doesn’t have any smart features, while the likes of the Honeywell Air Touch S8 (around Rs29,000; free H Plus app for Android and iOS) for managing the purifier using your phone.