Along with virtual reality, augmented reality provides a mixed reality experience for users

New Delhi: Not everyone can be Neil Armstrong. However, for those of us who can’t land on the moon, the AstroReality AR (augmented reality) app from Quantum AR Technologies provides a QR code that can be used to explore the moon’s surface. Likewise, Adobe’s new AR authoring tool for designers and developers called Project Aero aims at helping designers and developers create immersive content, and meld the physical and digital worlds.

At the three-day Adobe-sponsored Festival of the Impossible in San Francisco (8-10 June), 15 artists showcased art that relied on AR and virtual reality elements. For instance, a chequered table was transformed into a fiery cauldron, a torrent of rain and a virtual wind tunnel. Artificial turf came alive with chrome branches and butterflies. 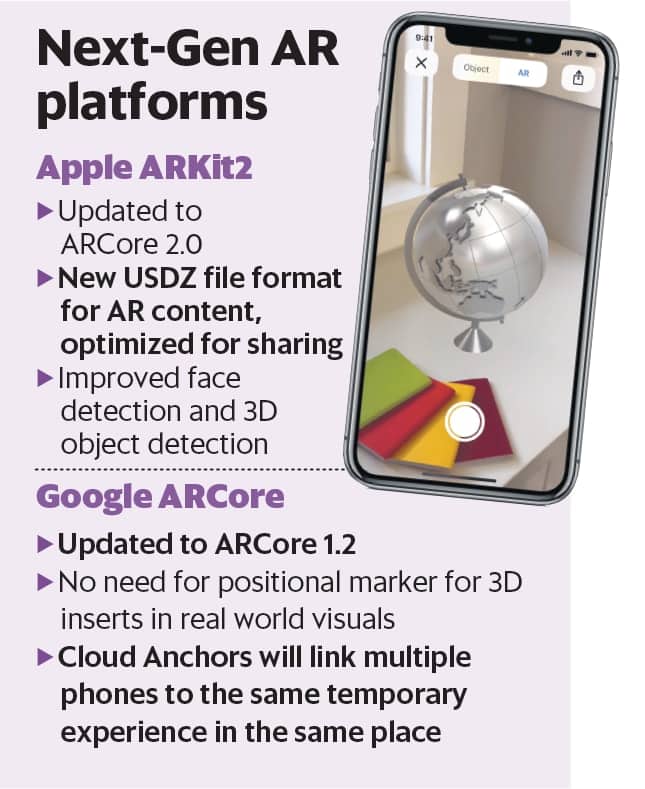 Even as Adobe is promoting Apple’s ARKit, Google has a rival platform called ARCore. Both these tools let developers build AR experiences for apps that run on mobile devices. On its part, Netflix’s first comic book—The Magic Order—relies heavily on Facebook AR. Every cover variant has its own unique QR code, which users have to scan to unlock animations and additional artwork. Netflix is using the Facebook Camera AR platform.

Netflix had earlier promoted its Stranger Things series with a bunch of Google AR stickers for Android phones, allowing fans to add the show’s characters in a series of photos users clicked with their phones. Facebook says it has already worked with more than 2,000 brands and publishers globally till date.

Developers are also extensively using AR frameworks to develop apps for educational purposes. Indian app developer Designmate, for instance, has an app called Froggipedia for the Apple iOS platform (₹ 299 on the App Store), which blends detailing and realism as you go about using the Apple Pencil to dissect a frog on an iPad.

The World Wildlife Fund has an app for iOS called Free Rivers (free on App Store), which is a great educational tool to understand how the river is the reason for the life along the entire stream, and how any changes to that could impact everything up and downstream.

Regardless, the AR app market is in its infancy. According to research firm Statista, the user base of apps with embedded AR features will be 4.67 billion by 2022, up from 992.2 million in 2017.

Standardization of AR content formats will only help. For instance, the new AR file format called Universal Scene Description (USDZ) has the support of Apple, Adobe and Pixar Studios. The advantage is the zero compression, unencrypted zip archive, which will enable easy sharing—developers will be able to design AR objects in Photoshop or Dimension apps, for instance, and export those into an AR environment. Apple says iOS 12 will adopt this file format for AR content. Adobe has updated the Creative Cloud suite of apps to support content in USDZ.

AR apps, conclude experts, undoubtedly need a lot more work before they go mainstream, but the fact is that companies have definitely begun taking small but right steps to make this technology popular.