Kiran Mazumdar-Shaw on why she has displayed nearly 1,500 works of art across the company's offices and research centre

In a corridor outside Kiran Mazumdar-Shaw’s private office at the Biocon campus in Bengaluru’s Electronic City is a painting by the late Yusuf Arakkal. The 3x3ft canvas from Arakkal’s Street Urchin series is in his signature style—a figurative piece bathed in earthy colours.

The story behind its acquisition is an interesting one. Mazumdar-Shaw, who had been introduced to Arakkal through friends and art collectors Purnima and Sarabjit Dhawan, had visited his old studio at HAL (Hindustan Aeronautics Ltd). There, she fell in love with this particular piece, but, as a struggling entrepreneur in the 1980s, couldn’t afford the artwork, priced at ₹ 3,000. “I remember paying him in three instalments over a year," recalls Mazumdar-Shaw with a smile.

Today, we are seated in the boardroom (outside Mazumdar-Shaw’s office), the walls lined with landscape paintings by Spanish artist Isidoro Lázaro, framed in antique wood. The collective worth of the 10 paintings, which, incidentally, were acquired by her husband John Shaw, would probably run into a few crore rupees.

There are nearly 1,500 pieces of original artwork (paintings, sculptures and murals) strewn across three Biocon properties in Electronic City and her residence. Tracing her love for art to her college days when, as a zoology major, she would spend hours labouring over sketches of flora and fauna as part of her curriculum, Mazumdar-Shaw says: “I always had an eye for art because I understood the effort and complexity of creating different textures and light effects and how difficult it is to work with different media."

Mazumdar-Shaw’s fondness for contemporary Indian art is evident in her selection of artists—apart from Arakkal, there’s a sizeable collection of Jamini Roy, M.F. Husain, Sunil Das, Jatin Das, Arpana Caur, Manjit Bawa, Bikash Bhattacharya, S.G. Vasudev and Paresh Maity, among others. Biocon has an employee in charge of cataloguing and maintaining an inventory of the works, which are rotated between the offices occasionally. After a certain point, Mazumdar-Shaw jokes, she ran out of space at home to showcase her and John’s collection. On a more serious note, Mazumdar-Shaw, chairperson of one of India’s largest biopharmaceutical companies, adds: “For me, it’s important to feel inspired every morning that I walk into my office. These works of art add life to the walls; it’s so much better than having a blank space. Then, I noticed that other people (in the office) started feeling good about it too."

To spread this feeling of positivity, she decided to put up artwork across all Biocon’s offices, including about 200 works at its research and development wing in Biocon Park, about 3km from her office. “If you think about it, science and art are both about creativity. An artist expresses his creativity through a painting, while a scientist expresses his through experiments in his laboratory. Both are experimental, original and creative," the 65-year-old explains.

Several of the works commissioned by Mazumdar-Shaw for Biocon display this interplay of science and art. For instance, outside the building that has Mazumdar-Shaw’s office is a steel sculpture by Arakkal called Genomic Inspiration, with DNA in the shape of a wheel. Similarly, the R&D centre has murals which blend DNA symbols with musical notes—Arakkal described these as the “music of life". “Since we are a biotech company, he brought in some aspect of what we are doing but with his interpretation. I have always nurtured that kind of expression of art," Mazumdar-Shaw adds.

Narendra Chirmule, head of R&D at Biocon, shares Mazumdar-Shaw’s passion for art. He is seated with seven members of his team in one of the conference rooms at the R&D centre, which has two Arakkal paintings hanging at one end of the room. Each of these team members represents a particular club at Biocon—there’s the culture team, an art club as well as a music club. “As part of the senior management of this company, my behaviour will be emulated. So, if I take off to spend the day at a museum, I am sending out a statement that it’s okay for others to do it as well," Chirmule says. The culture team was set up four years ago to study and understand the organization’s culture. Several events and competitions, as well as a flea market, are held in-house; employees get to showcase what Chirmule describes as their hidden talents. “While this allows employees to meet people from different departments as well as express themselves more freely, it also enhances productivity," he adds.

Such initiatives, clearly, emerge from a company culture that celebrates art, creativity and expression. At a personal level, Chirmule, who loves visiting museums and art galleries, says he has become “desensitized" to museums after coming to Biocon. “Now, I just walk around our corridors whenever I want to see some beautiful art," he adds. 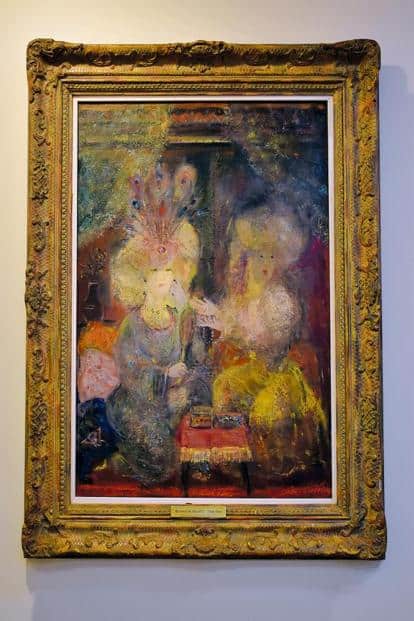 Shreshtha Rakshit, who works at Biocon’s R&D department and is a member of the art team, talks about how platforms such as the art or music clubs have enabled them to see their colleagues in a new light. “And whether you appreciate art or not, these paintings are definitely a conversation starter," she adds, pointing to the canvases lining the corridor. Her colleague Sohini Jana, who is part of the art club and an artist herself, talks about how a return to painting has changed her outlook to work completely. “I used to paint in school but stopped. After I started working, I felt my stress levels were going up but once I was encouraged to go back to painting, I felt like a new person. For me, art is like meditation," Jana says. Both Rakshit and Jana’s works adorn Chirmula’s office, as well as the desks of colleagues who have bought their work.

Arindam Guha, who is also part of the R&D department and a member of the culture team, takes us on a tour of his work area. Framed micrographs (digital images taken through a microscope) line the walls. These “scientific paintings", as Guha likes to call them, showcase different neurological and cellular processes. The corridor on the first floor has a series of black and white photographs, taken by Arakkal’s son Shibu Arakkal, depicting the development of the 90-acre Biocon Park through different stages of its construction. An unsightly lift chute at one of the neighbouring buildings is camouflaged behind a 20-30ft-high mural by Arakkal depicting antibodies.

Clearly, art has become part of the design at this biotech company. As Mazumdar-Shaw likes to say: “Art is so expansive; there are no boundaries. Science is a work of art and art is a scientific expression. If you look at it that way, there’s a natural fusion of creativity."

Art at work is a series which looks at how offices are looking to inspire and boost creativity in their staff through art. About three years ago, Kiran Mazumdar-Shaw found herself in the midst of a controversy when activists took exception to her proposal to “adopt" and transform the Visvesvaraya Industrial and Technological Museum. While that proposal was scrapped, Mazumdar-Shaw is on the board of directors for two upcoming museums in Bengaluru: Museum of Art and Photography (MAP) and Science Gallery Bengaluru. MAP, an initiative of Mazumdar-Shaw’s friend Abhishek Poddar (the founder of Tasveer Foundation), will house over 15,000 artworks dating from the 12th century to the present in a 42,000 sq. ft facility on Kasturba Road. The Science Gallery Bengaluru is an offshoot of the Global Science Gallery Network pioneered by Trinity College, Dublin. As the honorary Irish consul in Bengaluru, Mazumdar-Shaw was instrumental in bringing this project to the city, where it will be anchored by the Indian Institute of Science, National Centre for Biological Sciences and Srishti Institute of Art, Design and Technology. Different themes will be chosen, with an exhibition explaining these through the lens of science in an easy-to-grasp visual art format. Both galleries are scheduled to launch in 2020.