In a couple of weeks, as Goa’s Dempo Sports Club prepares to wrest the Federation Cup football title from defending champion Salgaocar, their starting line-up might just feature a name familiar to followers of the English Premier League (EPL).

Rohan Ricketts, an attacking midfielder/striker by trade and formerly (and unusually) of Arsenal and Tottenham Hotspur, might just be partnering Ryuji Sueoka or Koko Sakibo up front, having completed his move to the I-League champions during the transfer window. By doing so, Ricketts would become the first player with EPL experience (Arsenal: 2001-02, Spurs: 2002-05, Wolverhampton Wanderers: 2005-07) to play in the I-League.

The number of immigrant workers with H1-B visas drops t ...

Over the last four-five years, Ricketts has become what, in footballing parlance, is known as a “journeyman"—playing for various teams in countries like England, Canada, Hungary, Moldova, Germany, the Republic of Ireland and now, India.

Ricketts arrived in India in August to sign his contract with Dempo and might move to the country within the next week after completing work-permit related paperwork. But why India?

“Earlier in the year, I had a chat with my mate, Alan Gow (the former East Bengal striker from Scotland) and he told me that playing in India might be a good move," says Ricketts over the phone from London. “For me, a 29-year-old footballer, moving to India seems like a meaningful one. I heard about Dempo earlier, did my own homework about the I-League and I can’t wait to get started with my new club. After signing for the club, I’ve been made to feel welcome by everyone in India: the club, the I-League and the fans." 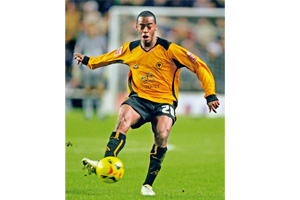 Ricketts concedes he’s fully aware of the change in not just the footballing environment, but also the standards, as he heads to Goa. “I am fully aware of the challenges that await me in India. I know the infrastructure and standards aren’t as high as other leagues in Asia, like Thailand and China, but there is a lot of potential," he says.

For a start, ground conditions (with the unseasonal monsoon) aren’t expected to be as pristine as in Europe, smaller leagues included. But he insists: “I am not a diva! I’ve grown up playing football on the streets of Clapham (a south London suburb) and I’ve played on worse pitches there."

“I am not taking this lightly. I am working hard on my fitness and hoping that it pays off when I join my teammates next week. It’s going to be a unique experience, and I am excited about it," he says.

Railways to tap RLDA for its station development project

For someone who has trained under some of the best coaches in England—including Arsène Wenger and Glenn Hoddle—Ricketts might be expected to help bridge the technical gap that somehow plagues Indian football. He says, “In England, particularly in football, coaching happens on a day-to-day basis and starts at a young age. Importantly, values of work ethic and professionalism are instilled when footballers are starting out. Our (Dempo) coach Armando Colaco was telling me about how this is missing in India and that’s where he said he’d like to see some improvement."

Ricketts adds, “Where I can help is by probably sharing my experiences of playing with the likes of Thierry Henry, Patrick Vieira, Robbie Keane and Ledley King, etc., with some of my Indian teammates."

Ricketts hopes his Indian experience will be as enriching as his time in Canada. He says: “When I first arrived in Canada, my perception of the country and football there was different from the time I left the country. It was an unbelievable experience." Ricketts argues that India, like Canada, is one of the newer football markets, and when players from bigger, more popular leagues play in these countries, it just adds to the credibility of the league. “What the I-League needs is good marketing, with players and clubs emerging as brands and further enhancing the experience."

Ricketts, who also runs an online magazine Column 10 and is a regular columnist for various publications, recently debuted as an author with Passion for Football, an eBook.

A footballing career that began on the streets of Clapham, was nurtured in Colney (Arsenal), and progressed at White Hart Lane, will now be entering an interesting and exciting phase when Ricketts walks out in Dempo’s blue at the Fatorda Stadium in Goa.