A new study reveals that omega 3, found in fish and seeds, can help build resistance against effects of air pollution

Clean air. It’s such a basic need and yet we live in times when even breathing can be harmful to health. The World Health Organization (WHO) estimates that environmental pollution causes 12.6 million deaths worldwide each year. According to WHO’s Global Burden of Disease comparative risk assessment for 2015, air pollution exposure contributes to approximately 1.8 million premature deaths and 49 million disability-adjusted life-years (DALYs) in India, ranking it among the top health concerns in the country.

“There is a link between air pollutants and a growing number of chronic diseases that are affecting us, but research into this is still in its nascent stages," says Anoop Misra, specialist in internal medicine and president of the National Diabetes, Obesity and Cholesterol Foundation, Delhi.

Air pollution is usually measured by the size of particulate matter (PM) in the air. “The WHO annual mean air quality limit for PM2.5 is less than 10g/m3 (micrograms per cubic metre), and for PM10, less than 20g/m3. Almost 75% of the world’s population lives in regions that exceed these limits," says Dr Misra.

“In India, in 2012, 21 of 22 cities and towns surveyed had particulate matter that was found to be 10-12 times higher than the desired limit. Of these, the worst affected were cities such as Ghaziabad, Varanasi, Gwalior, Delhi and Kanpur," he says. Delhi, on 9 November, witnessed the season’s worst air quality at 486 on the Air Quality Index (AQI), which is generated on the basis of six parameters—PM10, PM2.5, CO, SO2, NO2, & Ozone.

“Breathing in the toxins from polluted air affects the lungs first, but these toxins can enter the bloodstream and cause inflammation. In the long term, it can damage other organs, particularly the heart, kidneys, brain and liver, putting us at greater risk of heart attack, infertility and certain cancers," says Vikram Jaggi, director of the Asthma Chest and Allergy Centre, Delhi.

As populations and vehicular emissions grow, cleaning our air seems to be an ongoing struggle and one that we’re not entirely sure of winning. But for now, researchers say, there may be a way to mitigate some of the damage. A study published in March in the Biochimica Et Biophysica Acta journal established that omega 3 fatty acids, found naturally in flax seeds and fish, have the ability to combat the ill-effects of air pollution. When mice were given supplements of omega 3, it was established to have a significant protective effect—as much as 30-50% reduction in inflammation that is caused by inhaling air pollutants. The study’s researchers have recommended a dosage of 2-4g of omega 3 a day in humans to glean the same benefits. Indeed, a small human trial conducted at the EPA Human Studies facility at the University of North Carolina, US, from July 2009 to August 2010 has supported this research. Omega 3 supplements were given to 29 healthy middle-aged participants for four weeks and it was proven to have a significant effect in lowering LDL (low density lipoprotein) or “bad" cholesterol and improving cardiovascular protection. Larger human trials are now being conducted. 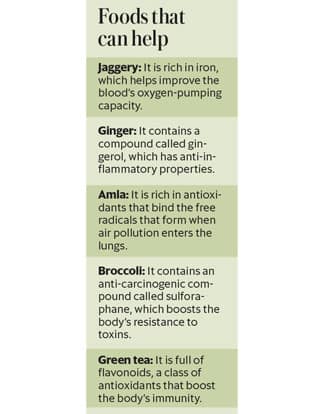 Expand
MORE FROM THIS SECTIONSee All

Utilities under radar over payment delays

This research finding is particularly significant for Indians, says Sherly Ganesh, dietitian, Columbia Asia Hospital, Bengaluru. Due to a largely vegetarian diet, it is a possibility that many could be deficient in omega 3 fatty acids. “The main source for this nutrient is oily, fatty fish, especially tuna, salmon, mackerel. Three servings a week are recommended, each serving being about 3.5 ounces. Vegetarians can get their supply from a teaspoon of flax seeds, chia seeds or a handful of walnuts daily," she says. Alternatively, an omega 3 supplement can help. “Natural sources are always better. A supplement however is recommended only under a doctor’s recommendation/supervision," says Ganesh, adding that omega 3 also boosts eye, brain, heart and joint health.

There are other important lifestyle changes we should be making as well, he says. “Drink at least 2 litres of water a day. This will help flush out the toxins that tend to build up. Exercise is essential to improve your lung capacity. If you live in a polluted city, working out indoors and avoiding stepping out when pollution is at its peak is advisable. A balanced healthy diet, rich in all the key nutrients, including omega 3, is the best way to battle the damaging effects of pollution," Dr Jaggi says.