Inside tales from duos in a working marriage

Starting your entrepreneurial journey in a domain that’s far from your professional expertise can be difficult. And what if your spouse also happens to be your co-founder? We speak to three couples who have managed to balance their personal and professional equations, and set up innovative businesses with aplomb. And while there are advantages and disadvantages of working with one’s spouse, these couples were unanimous in highlighting that their deep-rooted trust in each other is the cornerstone of their business.

In early 2017, Mumbai-based Krunal and Jill Veera started the Board Game Co., which provides corporate engagement and training through board games. Krunal, 28, is passionate about board games and has about 100 of them in his personal collection. However, it was only after a brainstorming session with Jill that he realized the value they can provide to corporates. Interestingly, the couple bonded through board games when they first met each other. Krunal was an investment banker with an MNC and Jill, 26, worked with media company Viacom in the international marketing department. They decided to quit in mid-2017 to put all their energy into the business.

After a few months of research, the duo came up with board games addressing 10 objectives such as strategic thinking, stress management, cognitive thinking, team building, making induction interesting, etc. “First we try to understand what the key pain points companies face. For instance, in my earlier company, we used to have quarterly sessions organized by HR. The objective was to get people from different departments together and encourage interaction. They did that by having a dinner session but what happened was people would sit with their own groups and not mingle. The quality of activities was poor," says Krunal.

ImpactGuru.com, a crowdfunding platform focused on raising donation for healthcare and social causes, was an idea that Piyush Jain, 33, worked on during his MBA. After graduation, Piyush joined BCG in Singapore and it took nine months before he discussed the idea of ImpactGuru with his wife Khushboo, a marketing executive who has worked with fashion designer Manish Malhotra, and few luxury labels like Jimmy Choo, etc. Khushboo, 31, was eager to do something on her own and the idea of ImpactGuru.com appealed to her. “I was ready for my next marketing challenge," says Khushboo. So, she left her job and worked solo on the venture for a year. She shuffled between Mumbai, Singapore and Jakarta, Indonesia. Khushboo relocated to Mumbai in 2014 first and eventually by 2015 Piyush quit his job and joined her. “That’s when we started dividing roles based on our strengths. I have investment banking and consulting experience, and decided to take finance, investing and a strategy role in the company, whereas Khushboo spearheads content, communication and marketing. Both of us work on the product and technology," explains Piyush.

Sometimes you need to test the proof of concept before quitting your job. Radhika Patil, 33, quit her job to build Cradlewise, which makes smart cradles for infants. “I spoke with 200 parents through a paediatrician’s help and collected data, which helped us to fine-tune the product. While I worked on the product, my husband Bharath worked part-time," says Radhika. 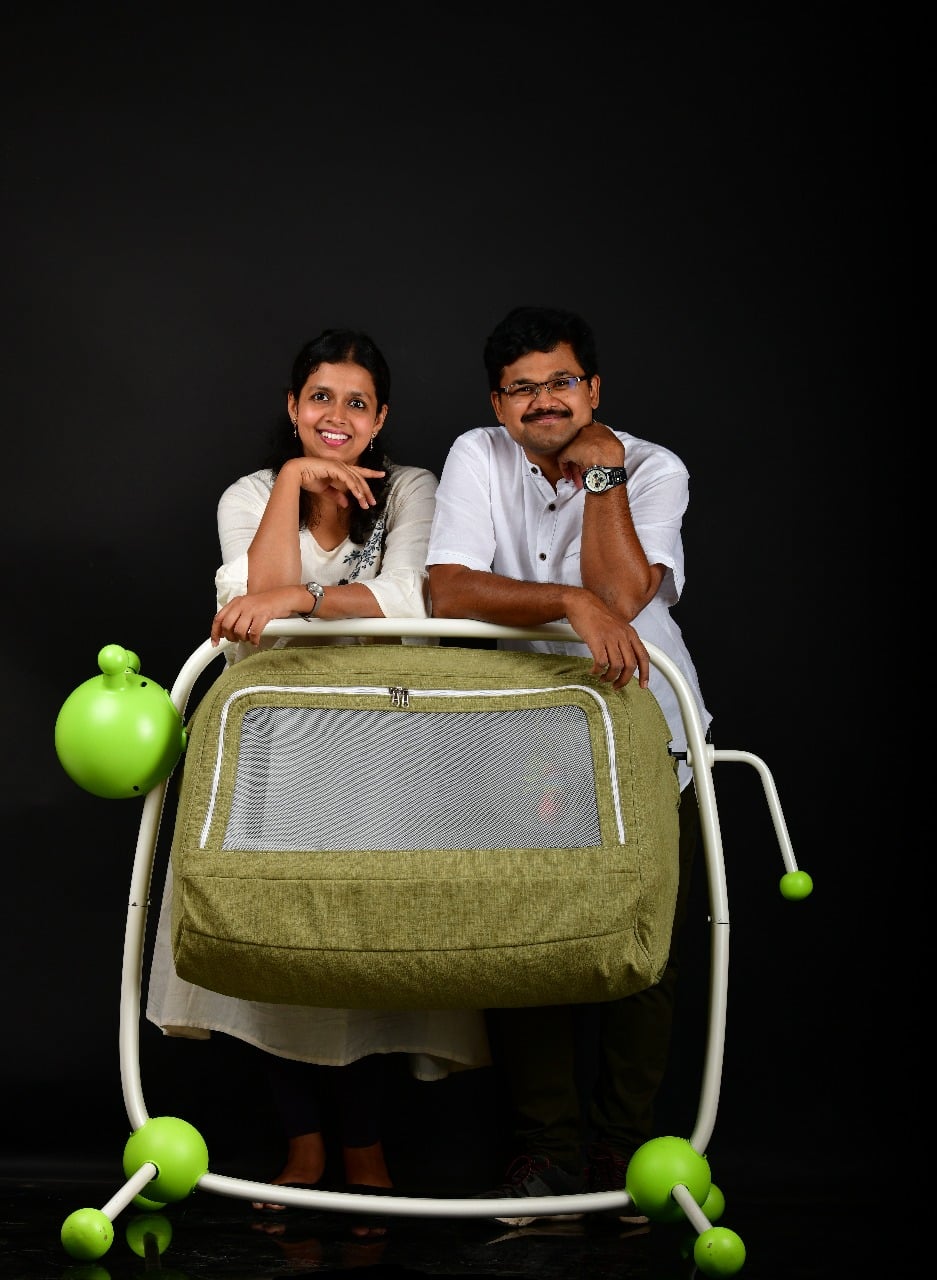 Radhika and Bharath Patil of Cradlewise.

Bharath Patil, 33, joined her full-time after their second child was eight months old. Both had worked for well-known MNCs—Bharath headed the R&D for a project at Texas Instruments in Bengaluru, while Radhika worked with Qualcomm before taking the entrepreneurial plunge in 2017.

To ensure both played to their strengths, the Patils have clearly demarcated each one’s roles. “I am the CEO of the company and look after the business end of the company, whereas Bharat is well-versed with the technology side and is the CTO," says Radhika. Their personalities complement each other, says Bharath, explaining that they have been co-workers on projects since when they were studying at Indian Institute of Science, Bengaluru. Whereas Radhika is good at networking, Bharath likes to work in the lab undisturbed. “That makes us better co-founders than married couple," says Bharath with a laugh.

At the Board Games Co., the Veeras haven’t reached a stage where they have clearly defined roles. “Both of us do everything. However, we have some specializations, like Jill takes the lead on marketing and how our content should look, while I handle research and development. But when it comes to pitching for clients, we do it together," says Krunal. Just over a year old, the company has six employees. It also helps that Jill is an extrovert and quick at making decisions, while Krunal is systematic, a planner and takes time. “Even when we play a (board) game, the only thing we fight over is on how much time he takes thinking and I am like, ‘Arree, just play fast’," says Jill.

Often there is a misconception that couples running a business may not be very professional or the business may collapse due to personal tiffs. Early in ImpactGuru.com’s journey, Piyush reveals they faced scepticism. Some potential employees and investors chose not to join them because the venture was co-founded by a couple.

Creating a professional, unbiased environment, therefore, was very important for the Jains, who have a team of 70 employees now. “People might assume that because we are husband and wife, there might be issues. It was a choice to overcompensate because we wanted to make sure the senior management team is strong that people can’t question that if there was tension between us, what impact it could have on work," says Piyush.

Of course, working together has come at the cost of personal leisure. The Jains say they have had to drastically reduce their vacation time. “It’s rare that both of us will be travelling together," says the couple, who equally divide their household chores.

The Veeras say there is hardly any barrier between personal and professional lives for them. “We are with each other 24/7. So at work, we will talk something personal, and at home we talk a lot about work. The drawback is that sometimes, you want a break and have some personal space and that is just not possible at this stage," says Krunal.