The commuter dad’s way of juggling life and work

Super commuters have to learn the art of balancing work, weekdays away from familyand early morning flights

Every Monday, Prateek Indwar wakes up at 3.30am in his Gurugram home. His wife Nupur wakes up as well, preparing a light breakfast, usually cereal and boiled eggs, that Indwar downs hastily before his pre-booked Uber arrives to take him to the Delhi airport. Four hours later, he is sitting at his desk at the IDFC Bank headquarters at Mumbai’s Bandra Kurla Complex where he works as a senior executive vice-president in client coverage and investment banking. In five days, he will make the same trip once again, this time in reverse.

Indwar says many of the business suit-clad commuters on his 5am Delhi-Mumbai Monday flight look familiar. The 50-year-old banker first noticed the phenomena of commuter dads when he was in London as head of corporate and investment banking for ICICI Bank 10 years ago. “Lots of people did it. They would commute to Dubai or Bahrain or Qatar, and come back two or three weekends in the month. And then there were those who commuted weekly, either from London to places like Birmingham, or to London while their families lived in the country. Often people worked an extra day remotely from home. The employers there are more accepting of such a setup," he says.

Indwar soon ended up becoming a weekly commuter himself. In 2012, when he returned to India, the family’s preferred choice of schools for his teenaged daughters was the The British School in Delhi. “I didn’t want to compromise on my job, Nupur didn’t want to compromise on her parenting, and the girls on their education. So, we thought that this arrangement would work for everybody," says Indwar, who has spent the last six years shuttling between Delhi and Mumbai.

The two sides of always being on the move

Weekly commuters or “super commuters" like Indwar prefer to take a flight to work because it’s easier than disrupting their families and moving their children to new schools. Today, work opportunities often come in different locations. And while technology has enabled remote working, there is still no real substitute for being on location. “In today’s work world, you need to be in the thick of things to play a more immersive role rather than treating your job as a technical assignment that you can do from a remote location," says Prithvi Chandrasekhar, managing director, risk and analytics, at Mumbai-based fintech start-up InCred. The 48-year-old began commuting every week to Mumbai last year while his family continued living in Bengaluru.

Weekly commuting means attending work events planned on Fridays can get tough. Critical decisions often end up being taken during unscheduled conversations, many of which may happen on Friday evenings. Then there are managements that are uneasy with employees whose families don’t move with them, says a senior manager who spent a year commuting from Ahmedabad to Mumbai and did not wish to named. “Maybe it’s because doing a commute is when a man is hedging himself—he can quit anytime. Also, the focus becomes fixing business trips to their home town on Fridays or Mondays," he says. During his year of commuting, he said he felt compelled to take extra care to not spend Fridays or Mondays at his home in Mumbai so as to avoid snide comments at work. Eventually he realized the commute wasn’t worth it . “It’s like you can do nothing: you come home and it’s time to go back to the office. There’s no bandwidth for anything else," he says.

Indwar’s six years of weekly commuting will finally end later this year when his wife Nupur moves to Mumbai. He feels his years of gruelling travel have paid off as his daughters have done well at school and have been accepted at Yale. Chandrasekhar’s commuting days are over too, as his family moves to Mumbai this month.“Is it something I could have done for longer if necessary? Yes, totally. But, on the other hand, I can totally see the argument that there are many things in life that are more important—like watching your children grow up. And therefore that one shouldn’t do it," he says. 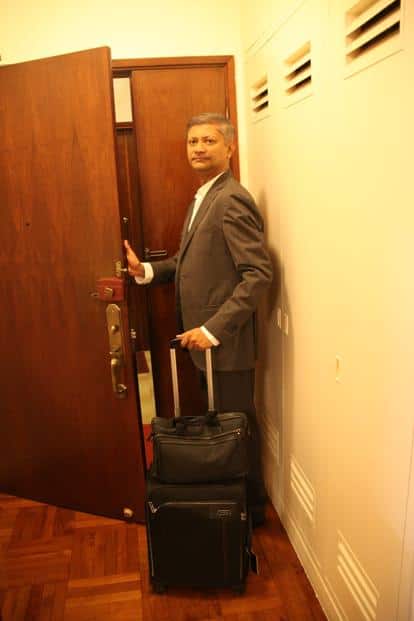 Arnab Mukherjea flies from Hong Kong to Singapore every week.
MORE FROM THIS SECTIONSee All

Life hacks from a flying father

Four years ago Arnab Mukherjea decided to do the weekly commute from Hong Kong to Singapore. The former derivatives trader at Citibank Global Markets Asia was offered an opportunity to work in the “buy side" of the business as chief risk officer at RV Capital Management Pvt. Ltd. But his children were in high school and moving schools for them would have been disruptive at that stage. “It wasn’t exactly uncharted territory, lots of people in South-East Asia do the commute," says Mukherjea, who was emboldened to take the plunge into commuting. His five tips for commuter dads:

■ Do your research: Consider the total travel time between the two places you are commuting between, whether they are in the same time zone as well as the number and frequency of connections between them. It also helps if you have actually done the travel several times, so you know exactly what it entails.

■ Standardize: I decided to take the exact same flight every Friday and Sunday every week. Standardizing also means I could book tickets two-three months in advance. I also switched to using a travel agent, even though that meant marginally more expensive fares. They can hold the bookings or make changes far more efficiently.

■ Use the conveniences of travel: As a frequent flier there are the benefits of lounges, advance boarding, etc., that make travel more comfortable. I also have a smart card that lets me automatically walk through immigration in 10 seconds. On a good day, it takes me 10 minutes to walk out of the plane and into a taxi.

■ Simplify. Eventually weekly commuting is a logistics thing. I found I was spending too long thinking of what to pack. So I decided to duplicate the entire establishment both at home and in my service apartment, right from toiletries to clothes.

■ Use your support group. I have friends, family and batch mates in Singapore, so I end up being asked out to eat at least a few times a week. If I were to be doing the reverse commute, from Singapore to Hong Kong, food would be a problem. But, luckily, Singapore has all sorts of eating-out options.