The madness of the football transfer season

Who's buying who, who's selling who, and other dribbles and dummies in this year's European football market

Last week, Barcelona signed the highly rated midfielder Arda Turan from Atlético Madrid. Smart move—but, funny thing is, Turan might never realize his dream of playing alongside his heroes Lionel Messi and Andrés Iniesta; in fact he might be sold right back to Atlético as early as 20 July. Here’s why: Barcelona hold their club elections this coming Saturday and one of the candidates has promised that if he wins, Turan will be sold right back to Madrid under a highly unusual 14-day buy-back clause in the player’s contract.

That candidate, Agusti Benedito, has nothing personal against Turan but he believes the transfer deal was pushed through by outgoing club president Josip Bartomeu to boost his re-election chances. Oh, and did I mention this: If Turan does stay at Barcelona, he can’t play for them (or anyone) till January because of an embargo on the club after it violated Fifa rules a couple of years ago.

Welcome to the crazy world of the football transfer season, which began in England on 1 July and ends across Europe on 1 September. In these two months, around $3 billion, or ₹ 18,900 crore—going by last year’s figures—will change hands as the clubs look to lock in their player rosters for the season ahead. There will be some bargains, some fair-price deals and some involving improbably high sums of money, even by football’s inflated standards. That’s how it has been since the summer transfer window (there’s a minor, mid-season window in January) was formalized by Fifa, the sport’s governing body, in 2002.

In some ways it resembles a high-stakes game of poker, or bidding at an auction, where the strongest nerves and coolest minds—and best bluffers—win. There are several factors that play important roles in the system. One is desire, in which one club is really keen on a specific player. It evokes the rites of courtship, with the buying and selling clubs signalling their intent and performing a pas de deux before one makes a formal bid. Too low, and you’ll get laughed out; too high at the start and you’ll get the player but lose face. One of this season’s highest-profile transfers so far has been Liverpool’s terrific young forward, Raheem Sterling, to Manchester City. Liverpool valued him at €50 million (around ₹ 490 crore); City made two initial bids, for €30 million and €40 million, but their keenness for him was well-known and they eventually paid close to the full amount to get him. 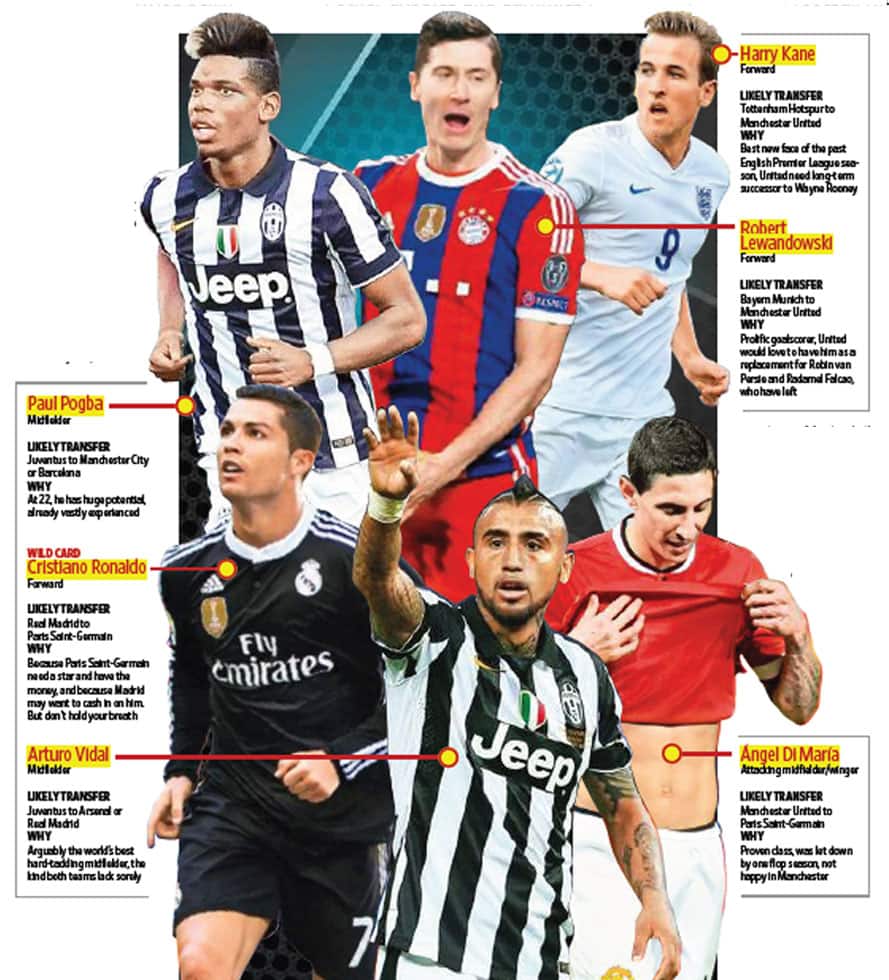 Goalkeepers are the X-factor this transfer season. If De Gea does go to Madrid, the domino effect could (qualifier important) include: Manchester United signing Hugo Lloris from Tottenham Hotspur to replace him, Tottenham signing a top-level replacement from another club, and so on down the line.

A similar domino game took place two years ago, when Arsenal signed up Mesut Özil from Real Madrid. The chain started with the Italian team Napoli, which sold Edinson Cavani to Paris Saint-Germain; with that money, Napoli bought three players from Real Madrid; with (some of) that money, Real Madrid bought Gareth Bale from Tottenham Hotspur and then recouped some more by selling Özil to Arsenal.

And then there are the player agents, probably the most powerful actors in the window. They have the star player’s ear and can influence his decision more than anything or anyone else. Till a few years ago, the super agent was the Israeli Pini Zahavi, whose close personal friendship with (among others) Russian billionaire Roman Abramovich helped him broker the latter’s takeover of the Chelsea football club. His successor is the Portuguese Jorge Mendes, whose client list includes Cristiano Ronaldo, José Mourinho, Diego Costa, Ángel Di María, James Rodríguez, Radamel Falcao and De Gea. In last year’s window, he brokered three of the biggest deals—involving Di María, Costa and Rodríguez—and is believed to have earned around €30 million out of that.

This season had promised to be reasonably quiet for Mendes and his ilk till Uefa, the governing body of European football, lifted a budget cap it had imposed on two of the richest clubs, Paris Saint-Germain and Manchester City. With those two, owned by the sheikhs of Qatar and Abu Dhabi, respectively, back in the mix, the floodgates could be thrown wide open.

Cue more frenzy in the media, grateful for any sort of grist with which to mill stories in the off season. It’s a willing, but important, accessory in the grand production that is the transfer season, at once an indicator, and even a driver, of fluctuating prices. Last month, The Wall Street Journal, after tracking all British papers for 30 days from the end of the recent season, found about 600 headlines linking 18 players to Manchester United. Two of the three players signed by United in that month don’t feature among those 18 names. The player grabbing the most headlines (64) was Bastian Schweinsteiger; he signed for United last week in a deal executed at super-fast speed.

Moral of the story? Like any good football match, the transfer season has its share of dribbles, step-overs and dummies. And penalties.