After purchasing a ticket for Rs10, a visitor’s first tangible encounter with history at the Dr Bhau Daji Lad Museum in Byculla takes place at the century-old turnstiles. They cut a fine, gently curved, functional figure, finished in steely matte black, a gentle indicator of the quality of exhibits here. The 160-year-old establishment is the city’s first museum and the first cultural institution to be governed by a public-private partnership (the Brihanmumbai municipal corp., the Jamnalal Bajaj Foundation and the Indian National Trust for Art and Cultural Heritage). The museum won Unesco’s 2005 Award of Excellence in Cultural Conservation after being restored by conservation architect Vikas Dilawari.

Like all museums offering a sense of place and time, Bhau Daji Lad records a reminder of India, and the city of Bombay (now Mumbai) under the British. A fair share of the objects presented can act as a record of the British empire’s impact or lack of, on both, the city and the country.

Adani group to invest over $100 billion in next decade

Wait, ‘not the time to aggressively buy the dips’: Mark ...

The museum is hosting an exhibition titled Asymmetrical Objects to mark a decade since its reopening after restoration. The exhibition, which opens today, has works by prominent artists like Jitish Kallat, Manish Nai, Mithu Sen, Sahej Rahal and Shilpa Gupta.

Besides the exhibition, there is much to marvel at at the museum. However, viewing all 3,500 artefacts can be challenging. So here’s what you should be looking out for.

What it lacks in height, the two-level Palladian structure makes up for in details. Look upwards to see a stencilled and stuccoed ceiling, where alternate squares sport a gold-bordered star of David, presumably a nod to David Sassoon, the Jewish philanthropist whose patronage helped found the museum. Supported by delicately winding, ornate Doric pillars, the expansive ceiling has thin arches along its length. The colourful, well-aged Minton tiles on the staircase and first floor point out its period of construction from their popularity in the mid-19th century. 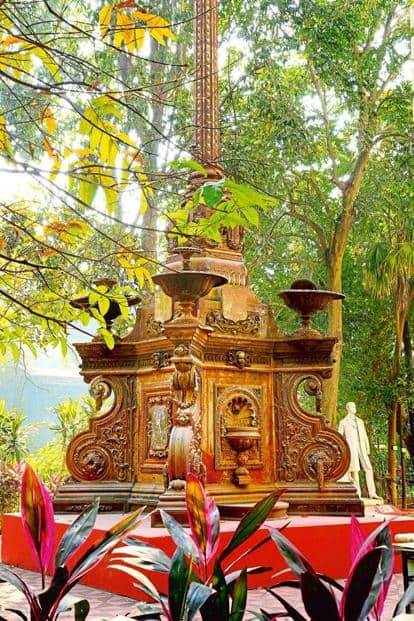 'Who would have imagined that world would change in jus ...

The city maps on the upper level tell the story of Bombay’s evolution from seven islands to an industrial city and port. Start with the exhibit titled Heptanesia, a Greek word meaning seven islands, as recorded in the writings of Ptolemy. It remains the first recorded name for the city in any written language. Follow this with Grose’s Plan Of Bombay, an 18th-century watercolour mapping the streets within Fort to scale, making it a thorough representation of the closed city. Two large models of Worli by the City of Bombay Improvement Trust are displayed, laying out the topography of one of the original seven islands. One shows Worli before the establishment of mills, while the other shows houses, parks and grounds along with the first mills of the city, which brought in the first wave of migrant labourers.

Located in a gardened path by the museum, the statuary offers more glimpses of early Bombay. Headless statues of Lord Marquis of Cornwallis and Wellesley are a curious sight—a result of the violence during the Samyukta Maharashtra Movement in the 1950s. The statues were later removed from their original locations in Fort and placed here. The pride of place, however, belongs to tall, rust-coloured lamp-post-fountain erected in the memory of Sir Seymour Fitzgerald, in 1867. That the statues of these distinguished men occupy a row facing stone plaques for civic amenities which they helped build must be its own form of irony.

After the school of art was established in 1856, its superintendent installed a kiln for students to experiment with clay. Early shapes of pottery resembled popular Greek and Roman patterns of the era. Local touches came in the form of patterns, drawings and colours, beginning with the Ajanta caves. Indigenous species of fruits and flowers are painted on white, blue and turquoise pots with mythological scenes from the Ramayan and the Mahabharat. Unusual colours like dark green, gold and nude became popular, as these pots sold quickly at art fairs in Pune, Kolkata, Amsterdam and London.

Mementos to take home can be found at the museum shop. A smattering of art books and catalogues of work by artists like Atul Dodiya, fridge magnets of Minton tiles and the museum’s intricate ceiling offer a tribute to the building’s rare architectural style.

Asymmetrical Objects is on till 27 March, 10am-5.30pm (Wednesdays closed).