Instagram has gained new users among older generations even while retaining young users, the latest round of the Yougov-Mint-CPR Millennial Survey shows. The survey also shows that users across age groups are spending more time on video streaming platforms than before.

Across Indian cities, those with professional degrees are much more likely to rely on newspapers and news portals for news than on social media forwards. Men, more than women, use the internet for news. Women, more than men, use it for education-related content. Both men and women who are living away from their partners, or are single, tend to spend more time online.

These are some of the key findings of the latest round of YouGov-Mint-CPR Millennial Survey, which surveyed nearly 10,000 respondents spread across 203 cities and towns of the country. Roughly half of the respondents in the online survey conducted in the Oct-Nov 2020 period were millennials (aged 24 to 39). The rest were post-millennials (aged 18 to 23) and pre-millennials (above 39). The survey is the fifth of a series of bi-annual online surveys aimed at examining the aspirations, anxieties, and attitudes of India’s digital natives.

Over the past two years, the time spent by urban Indians online has gone up, particularly when it comes to watching videos. 51% said that they regularly watch videos online for leisure, compared to 46% in 2018, when the first round of this series of surveys was conducted. 41% respondents now spend more than 6 hours a week on video-streaming platforms, compared to 31% in 2018.

Among social media sites, Instagram saw the biggest rise in active users. The share of those who visit the site regularly rose 10 percentage points over the past two years to 72%, driven largely by Instagram users from Tier-3 cities and towns. The photo-sharing platform is gaining traction among older generations. 54% pre-millennials are now active on Instagram compared to 36% in 2018. The proportion of active Instagram users among older millennials (aged 31 to 39) also rose 9 percentage points to 68% over the same period. There was hardly any change in the proportion of active users among younger millennials and post-millennials, who remain the dominant users on the site.

Facebook saw a decline in the share of active users across all city tiers. The decline over the past two years was sharpest among Tier-3 respondents, the data from the respective survey rounds show.

The Only Adani Stock Worth Looking At

Indecision over India’s fiscal law ought to end

Why the new income tax regime has limited appeal?

The YouGov-Mint-CPR Millennial Survey was conducted jointly by the Indian arm of the global market research firm YouGov, Mint, and the Delhi-based think tank Centre for Policy Research (CPR).

The survey shows that the internet’s draw is greatest for single and lonely individuals. 63% of singles spent more than 4 hours a week on social media sites compared to 55% of those living with a spouse or partner. Those who are in a relationship but living away from their partner tend to spend even more time on social media sites than singles.

56% respondents said that they primarily use the internet for news. The online news sources are varied, from e-papers to news portals to social media feeds. The professionally educated rely more on newspapers and their online versions for news and less on social media forwards (WhatsApp/Facebook etc.) and relatives compared to the less educated, the survey data shows.

The pandemic may have pushed more people towards the net but different cohorts and genders are using the net quite differently, the Yougov-Mint-CPR Millennial Survey shows.

This is the concluding part of a five-part data journalism series on how the pandemic has impacted India’s digital natives. The first part looked at the unequal impact of job and income losses in urban India, the second looked at how Indians are tackling financial insecurity, the third part explored personal and professional lifestyle changes during the pandemic, and the fourth looked at attitudes towards covid vaccination . 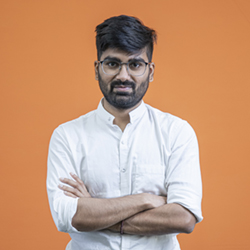 Tauseef Shahidi has been with Mint since September 2020. He writes both data-based stories and longform features across beats. As he could not make up his mind to pursue one discipline, he became a journalist to dabble in everything.
Read more from this author
Catch all the Technology News and Updates on Live Mint. Download The Mint News App to get Daily Market Updates & Live Business News.
More Less
Topics
plain-facts yougov-mint-cpr millennial survey
OPEN IN APP